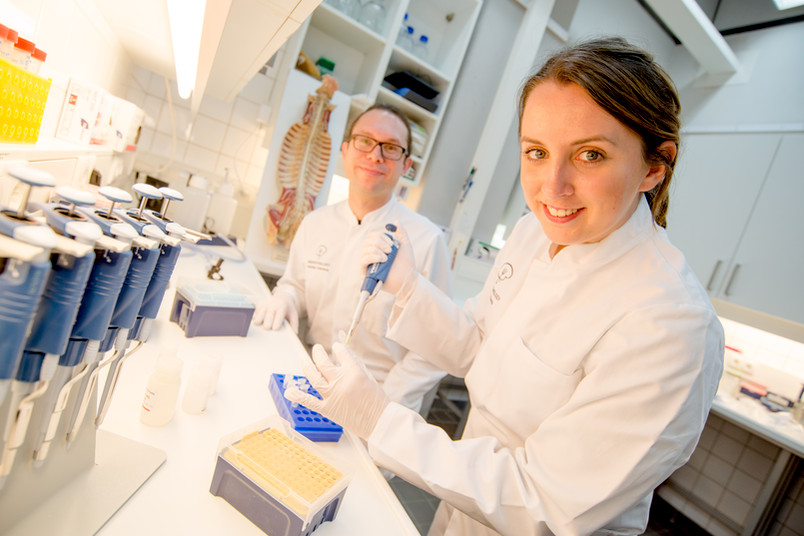 The reasons for our left or right-handedness

Unlike hitherto assumed, the cause is not to be found in the brain.

It is not the brain that determines if people are right or left-handed, but the spinal cord. This has been inferred from the research results compiled by a team headed by private lecturer Dr Sebastian Ocklenburg, Judith Schmitz, and Prof Dr H. C. Onur Güntürkün. Together with colleagues from the Netherlands and from South Africa, the biopsychologists at Ruhr-Universität Bochum have demonstrated that gene activity in the spinal cord is asymmetrical already in the womb. A preference for the left or the right hand might be traced back to that asymmetry.

“These results fundamentally change our understanding of the cause of hemispheric asymmetries,” conclude the authors. The team report about their study in the journal “eLife”.

Preference in the womb

To date, it had been assumed that differences in gene activity of the right and left hemisphere might be responsible for a person’s handedness. A preference for moving the left or right hand develops in the womb from the eighth week of pregnancy, according to ultrasound scans carried out in the 1980s. From the 13th week of pregnancy, unborn children prefer to suck either their right or their left thumb.

The influence of environmental factors

The researchers analysed the gene expression in the spinal cord during the eighth to twelfth week of pregnancy and detected marked right-left differences in the eighth week – in precisely those spinal cord segments that control the movements of arms and legs. Another study had shown that unborn children carry out asymmetric hand movements just as early as that.

The researchers, moreover, traced the cause of asymmetric gene activity. Epigenetic factors appear to be at the root of it, reflecting environmental influences. Those influences might, for example, lead to enzymes bonding methyl groups to the DNA, which in turn would affect and minimise the reading of genes. As this occurs to a different extent in the left and the right spinal cord, there is a difference to the activity of genes on both sides.

For the study, the team from Ruhr-Universität Bochum collaborated with the Max Planck Institute for Psycholinguistics in the Netherlands as well as the Dutch Radboud University and the South-African Wellenberg Research Centre at Stellenbosch University.

The study was funded by the German Research Foundation (Gu227/16-1).