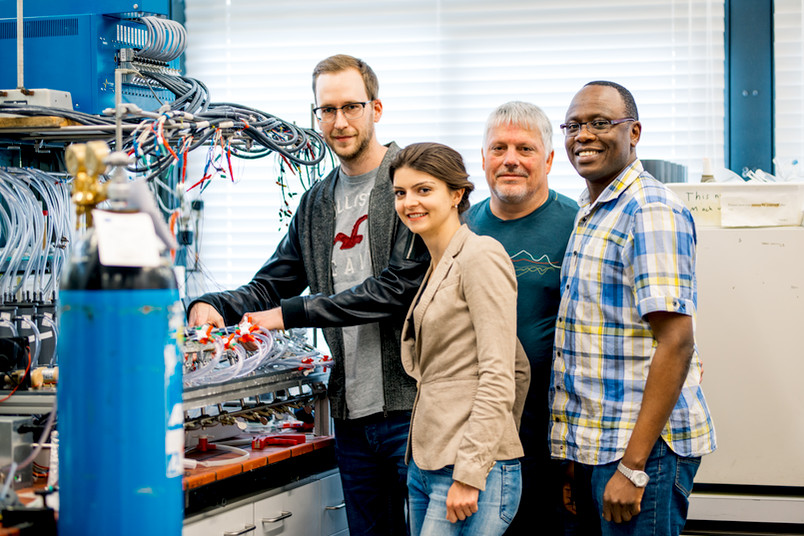 Chemically aggressive conditions prevail during the manufacture of hydrogen from water. This wears out the catalysts used. It would be practical if they were to regenerate themselves.

Chemists at the Centre for Electrochemical Sciences at Ruhr-Universität Bochum have developed a catalyst with self-healing properties. Under the challenging conditions of water electrolysis for hydrogen production, the catalyst material regenerates itself, as long as the components required for this are present in the electrolyte solution. A team involving Stefan Barwe, Prof Dr Wolfgang Schuhmann and Dr Edgar Ventosa from the Bochum Chair of Analytical Chemistry reports on this in the journal Angewandte Chemie International Edition. The work took place as part of the cluster of excellence Resolv.

Hydrogen is considered an energy source of the future. However, finding stable and efficient catalysts to synthesise it is a challenge. This synthesis takes place using water electrolysis, with hydrogen created at one electrode and oxygen at the other. The electrodes are covered with a catalyst film, which is attacked during the reaction and becomes less effective.

Catalyst surface forms by itself

In a feasibility study, the Bochum chemists demonstrated a new way of creating a highly stable catalyst film. They added catalyst nanoparticles in the form of a powder to the solution, which surrounds the electrodes. The particles pumped through the electrode chambers collide with the electrode surface; there, a particle film forms based on electrostatic attraction forces. Particles with a positively charged surface are deposited on the anode and particles with a negatively charged surface on the cathode. The catalyst film thus forms by itself.

Via the same mechanism, the catalyst surface regenerated during the reaction. New nanoparticles from the solution moved to the electrodes, where they freshened up the worn catalyst film. This self-healing effect lasted as long as catalyst particles were present in the solution.

The researchers worked with nickel electrodes. They tested two different catalyst powders for the two electrodes, one a nickel-based material and one a cobalt-based material. All of the catalyst materials formed a film a few micrometres thick on the electrodes, as electron-microscopic captures confirmed. The measurements also showed that functional systems formed that produced hydrogen in a stable manner over several days.

In further studies, the chemists now want to investigate more closely the influence of particle shape and size as well as the influence of the electrolyte solution on the efficiency and stability of the catalysts.

The German Research Foundation supported the work as part of the cluster of excellence Resolv (EXC1069). Additional funding came from the German Federal Ministry of Education and Research as part of the “Mangan” project (FKZ 03EK3548).