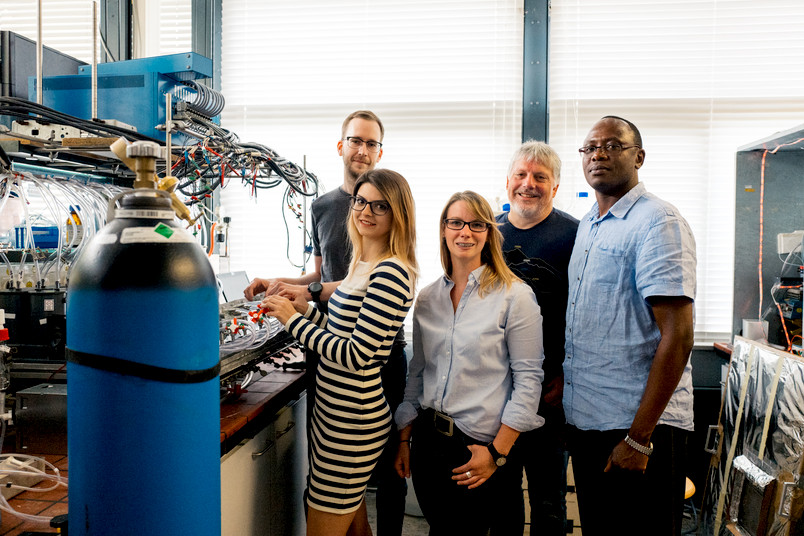 The team at the Center for Electrochemical Sciences at Ruhr-Universität Bochum: Stefan Barwe, Dr Corina Andronescu, Sandra Möller, Prof Dr Wolfgang Schuhmann and Dr Justus Masa (from left to right). The home-made apparatus shown in the background allows the scientists to simultaneously explore the long-term stability of up to ten catalysts without blocking the infrastructure for other measurements.
© RUB, Kramer
Chemistry

Fixation of powder catalysts on electrodes

The envisaged industrial application necessitates catalysts to do their job for years. This new method could assist in achieving it.

Chemists at Ruhr-Universität Bochum have developed a new method to tightly fix catalyst powders on electrode surfaces. Currently, the high physical stress induced on catalyst films by gas evolving reactions hampers the application of powder based catalysts. The developed technique is potentially interesting for hydrogen production by water electrolysis. A team involving Dr Corina Andronescu, Stefan Barwe and Prof Dr Wolfgang Schuhmann from the Center for Electrochemical Sciences reports on this in the international edition of Angewandte Chemie.

„Catalyst syntheses often aim for nanoparticles in order to achieve a high surface area,“ Wolfgang Schuhmann explains. However, tight and stable fixation of nanopowders on electrodes still remains challenging. Suitable catalyst binders exist for electrodes employed in acidic media. Such binders are often deployed in alkaline environments because of the lack of suitable alternatives. However, a major drawback of using these binder materials in alkaline electrolytes is that they are intrinsically unstable and electrically insulating, thus essentially impeding the application of many highly active and potentially industrially interesting powder catalysts.

The team from Bochum proposes a new method for tight powder catalyst fixation on metal surfaces. They utilized a specific organic polymer, namely polybenzoxazine, which transforms to carbon at temperatures around 500 degree Celsius. The polymer was applied together with the powder catalyst on the surface of a nickel electrode and subsequently heated at high temperatures. Upon thermal treatment, the polymer transformed into a carbon matrix embedding the powder catalyst particles.

The distinctiveness was the choice of the used polymer. Polybenzoxazines are highly thermal stable and exhibit near-zero shrinkage at higher temperatures. In the absence of oxygen, they carbonize giving high residual char.

„We expect that the presented method might also be applicable at an industrial scale, although this is yet to be validated. However, the necessary procedures are already well established,“ Schuhmann says. In principle, it is the same technique as painting the door of a car. „A mixture of catalyst and polymer could be sprayed on an electrode surface, which is then transferred into an oven,“ the scientist illustrates. The team at the Center for Electrochemical Sciences already tested this at the laboratory scale.

The German Research Foundation supported the work as part of the cluster of excellence Resolv (EXC1069). Additional funding came from the German Federal Ministry of Education and Research as part of the “Mangan” project (FKZ 03EK3548).