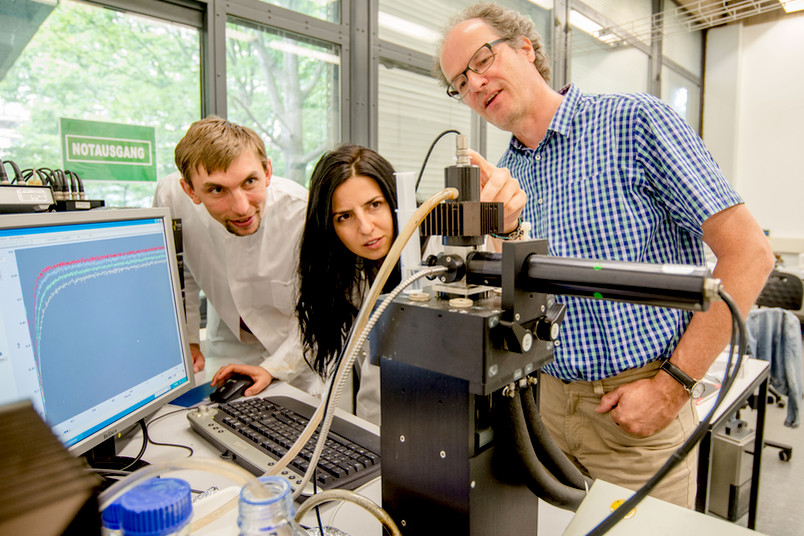 How proteins bring together membrane blebs

This mechanism could be a crucial step in the cellular degradation of pathogens.

Researchers have gained new insights into the mechanisms with which certain proteins help the immune defence mechanism in the human body. Pathogens such as viruses or bacteria are wrapped in membrane blebs and rendered harmless there. What are known as guanylate-binding proteins are crucial in this. How they contribute to the process that was investigated by researchers from Ruhr-Universität Bochum, the Paul-Ehrlich-Institut and the University of Cologne, together with other partners from Erlangen and Geneva.

The team led by Prof Dr Christian Herrmann and Dr Sergii Shydlovskyi from the Bochum cluster of excellence Resolv and Dr Gerrit Praefcke, formerly of the University of Cologne, now at the Paul-Ehrlich-Institut in Langen, reports on the study in the journal Proceedings of the National Academy of Sciences, PNAS for short.

With a combination of cell biology and biochemical experiments, the researchers explored the function of human guanylate-binding protein 1 (hGBP1). In cells, it interacts with the energy storage molecule GTP, from which it can split off one or two phosphate groups, in order to release energy.

In the current study, the researchers discovered that hGBP1 uses energy released during splitting to change its structure: it unveils a lipid anchor. Using this anchor, it can form larger ring-shaped polymers with other hGBP1 proteins. With the aid of artificial vesicles, the team also found that hGBP1 uses the anchor to bind to the vesicle membrane. In this way, it brings together many such membrane blebs, which the researchers assume could be a precursor to vesicle fusion.

This kind of fusion is crucial for the immune defence mechanism: pathogens are trapped in the human body in vesicles, which merge with certain cell organelles, lysosomes. The latter contain enzymes that degrade pathogens. In the current study, the team also demonstrated that the protein hGBP1 in living cells is actually involved in the signal path, which leads via the lysosomes to the degradation of viruses and bacteria.

The German Research Foundation funded the work as part of the cluster of excellence Resolv (EXC 1069), the Collaborative Research Centre SFB 635 and the priority programme 1580. Further funding came from the European Commission’s seventh framework programme for research in the grant TRANSPOL 264399.