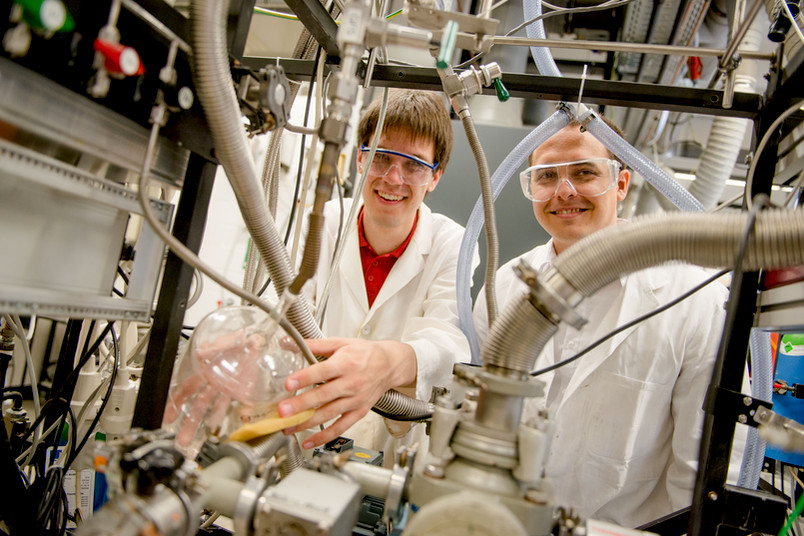 It’s as though a tiger has left his cage, although the fence is too high to jump over it.

Chemists at Ruhr-Universität Bochum have found evidence that carbon atoms cannot only behave like particles but also like waves. This quantum-mechanical property is well-known for light particles such as electrons or hydrogen atoms. However, researchers have only rarely observed the wave-particle duality for heavy atoms, such as carbon. The team led by Prof Dr Wolfram Sander and Tim Schleif from the Chair for Organic Chemistry II together with Prof Dr Weston Thatcher Borden, University of North Texas, reports in the journal “Angewandte Chemie”.

Wolfram Sander explains the paradox: “It’s as though a tiger has left his cage without jumping over the fence, which is much too high for him. But he still gets out.” This is only possible if he behaves like a wave, but not if he behaves like a particle. The probability of an object being able to tunnel depends on its mass. The phenomenon can, for instance, be observed much more easily for light electrons than for relatively heavy carbon atoms.

The researchers investigated the tunnel reaction using the Cope rearrangement, a chemical reaction that has been known for almost 80 years. The starting material for the reaction, a hydrocarbon compound, is identical to the product molecule. The same chemical compound thus exists before and after the reaction. However, the bonds between the carbon atoms change during the process.

In their experiment, the Bochum-based researchers marked one of the carbon atoms in the molecule: They replaced the hydrogen atom bonded to it with the hydrogen isotope deuterium, a heavier version of hydrogen. Molecules before and after the Cope rearrangement differed in terms of the distribution of the deuterium. Due to these different distributions, both molecular forms had slightly different energies.

This transition cannot, however, occur in the classic way – since, when rearranging from one form to the other, an energy barrier has to be overcome, although the molecule itself does not have the energy for this and the cold environment is also unable to provide it. Although the new balance should not occur in the classic way, the researchers were nevertheless able to demonstrate it in the experiment. Their conclusion: the Cope rearrangement at extremely low temperatures can only be explained by a tunnel effect. They thus provided experimental evidence for a prediction made by Weston Borden over five years ago based on theoretical studies.

At Ruhr-Universität, Wolfram Sander undertakes research in the cluster of excellence Ruhr Explores Solvation, where he concerns himself with the interactions of solvents and dissolved molecules. “It is known that solvents influence the ability to tunnel,” says the chemist. “However, so far it has not been understood how they do that.”

The German Research Foundation supported the work as part of the cluster of excellence Ruhr Explores Solvation (EXC 1069), which is based at Ruhr-Universität Bochum. Further financial resources for the University of North Texas came from the Robert A. Welch Foundation (Grant B0027).