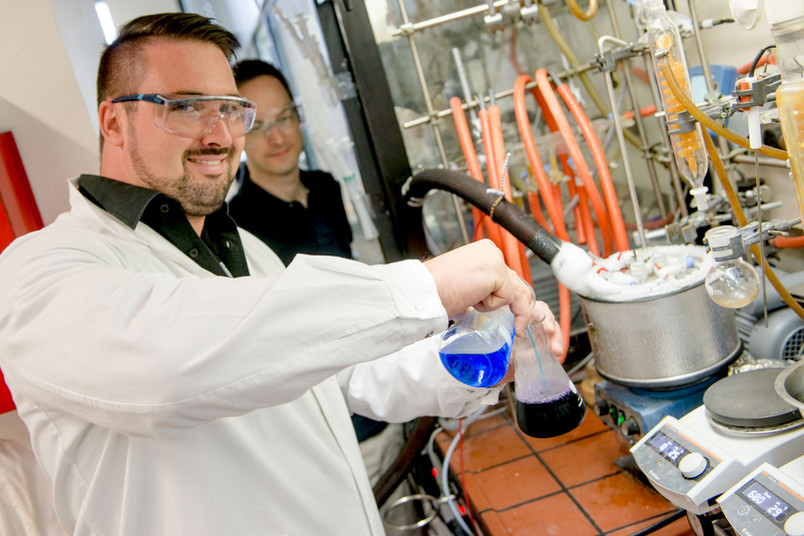 Patrick Wonner and Stefan Huber have transferred the principle of the hydrogen bond to other elements.
© RUB, Marquard
Chemistry

Chemists at Ruhr-Universität Bochum have tested a new approach for activating chemical reactions based on the element selenium. They demonstrated that selenium can form bonds similar to those of hydrogen bonds, resulting in accelerated reactions. The exact mechanism is described by the team at the Chair of Organic Chemistry 1 in Bochum, including Prof Dr Stefan Huber and Patrick Wonner, in the journal “Angewandte Chemie”, in collaboration with Prof Dr Daniel Werz from Braunschweig University of Technology.

Traditionally, metal complexes are used as activators and catalysts. They form complete, i.e. covalent bonds with the molecule whose reactions they are supposed to accelerate. However, the metals are often expensive or toxic.

In the recent years, it has become evident that a covalent bond is not absolutely necessary for activation or catalysis. Weaker bonds, such as hydrogen bonds, might be sufficient. Here, the bond forms between a positively polarised hydrogen atom and the negatively polarised centre of another molecule. In the same way as hydrogen, elements of group 17 in the periodic table, namely halogens such as chlorine, bromide and iodine, can form weak bonds – and thus serve as activators or catalysts.

Stefan Huber’s team transferred this principle to elements from group 16 of the periodic table, i.e. chalcogens. The researchers used compounds with a positively polarised selenium atom. It forms a weak bond to the substrate of the reaction, the transformation of which was accelerated by 20 to 30 times as a result.

For comparison purposes, the chemists also tested compounds in which they’d replaced the selenium centre by another element. Molecules without selenium did not accelerate the reaction. “Consequently, the observed effect can be clearly attributed to selenium as active centre,” says Huber.

In earlier studies, only one comparable case of chalcogen catalysis had emerged; there, sulphur was used instead of selenium. “As selenium can be polarised more easily than sulphur, it has greater potential as a catalyst component in the long term,” explains Stefan Huber. “In combination with halogen bonds, chalcogen bonds have added two fascinating mechanism to the chemists’ repertoire, for which there is no known equivalent in nature, for example in enzymes.”

In the next step, the team plans to demonstrate that selenium compounds can be utilised as adequate catalysts. At present, the researchers refer to them as activators, as relatively large amounts of the substance are required to trigger the reaction. This is because the term catalyst cannot be used until the amount of the necessary selenium compounds is smaller than the amount of the starting materials required for the reaction.

The project was funded by the European Research Council (ERC) as part of the Horizon 2020 Programme (638337).