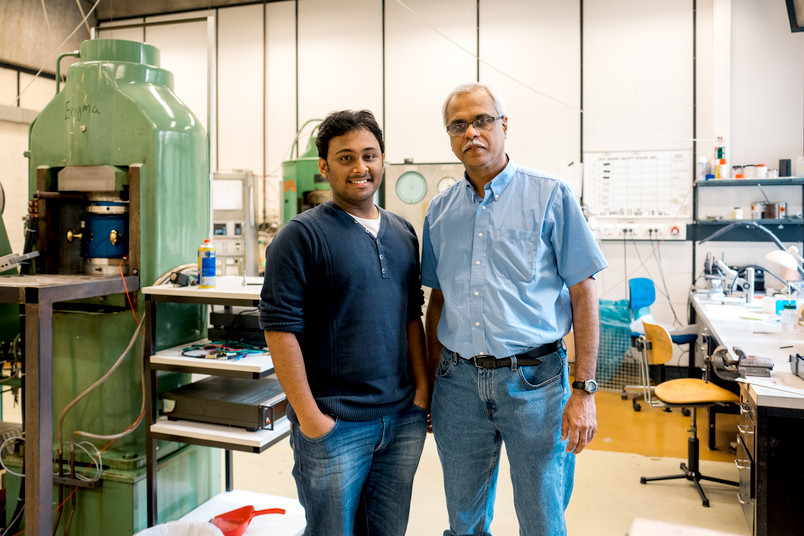 Priyadarshi Chowdhury (left) and Sumit Chakraborty (right) have developed a model that reconstructs billions of years in the history of the Earth.
© RUB, Kramer
Earth history

How continents were recycled

Plate tectonics is the reason for the Earth’s dynamic surface. But when did it first emerge? And will the present-day continents last forever?

Researchers from Germany and Switzerland have used computer simulations to analyse how plate tectonics have evolved on Earth over the last three billion years. They show that tectonic processes have changed in the course of the time, and demonstrate how those changes contributed to the formation and destruction of continents. The model reconstructs how present-day continents, oceans and the atmosphere may have evolved.

Priyadarshi Chowdhury and Prof Dr Sumit Chakraborty from Ruhr-Universität Bochum, together with Prof Dr Taras Gerya from the Swiss Federal Institute of Technology in Zürich (ETH), present their work in the journal “Nature Geosciences”.

The Earth formed approximately four and a half billion years ago. There was a phase – perhaps even several – when it was mainly composed of molten rock. As it cooled, solid rock and the Earth’s crust formed. Generally speaking, there are two types of crust on Earth: a lighter continental crust that is rich in silicon and constitutes the dry land above sea level, and a denser oceanic crust where water gathers in the form of large oceans. “These properties render the Earth habitable,” says Sumit Chakraborty. “We haven’t found anything comparable anywhere else in the universe.”

Even though the young Earth did have continents and oceans, there were initially perhaps no plates and, consequently, no plate tectonics. The question when they emerged is much disputed. The Earth’s crust slowly assumed its present dynamic form: in some places the plates go into the mantle; in other places new plates form from the hot material that rises from the interior of the Earth.

Also, the question when plate tectonics first emerged is not the only one that remains unanswered; it is also unclear whether that process has always been the same and whether continents last forever or are recycled. These are the questions that the German-Swiss research team investigated. Their new thermomechanical computer model supports the growing notion that perhaps plate tectonics was already operating approximately three billion years ago. More uniquely, the study demonstrates how the Earth’s earliest continental crust – richer in iron and magnesium – was destroyed some two or three billion years ago and how the present continental crust – richer in silicon – formed from it.

Continental recycling is the order of the day

On the young Earth, continents were recycled all the time. Continental recycling still takes place today when two continents collide, but it progresses more slowly and in a different manner than it used to. “Over time, the continental crust became prone to preservation during continent-continent collision,” says Priyadarshi Chowdhury. On the old, still hot Earth, thin layers peeled off from the Earth’s crust whereas on the present-day Earth, chunks of the continental crust break off in the collision zones, i.e. in places where one plate moves under another.

The researchers assume that the destruction of the early iron-magnesium rich continental crust was crucial for the formation of the silicon-rich continents and that it was the reason why these continents could rise above sea level to a larger extent. “These changes to the continental character might have contributed to the Great Oxygenation Event on Earth – and, consequently, to the origin of life as we know it,” suspects Chowdhury.