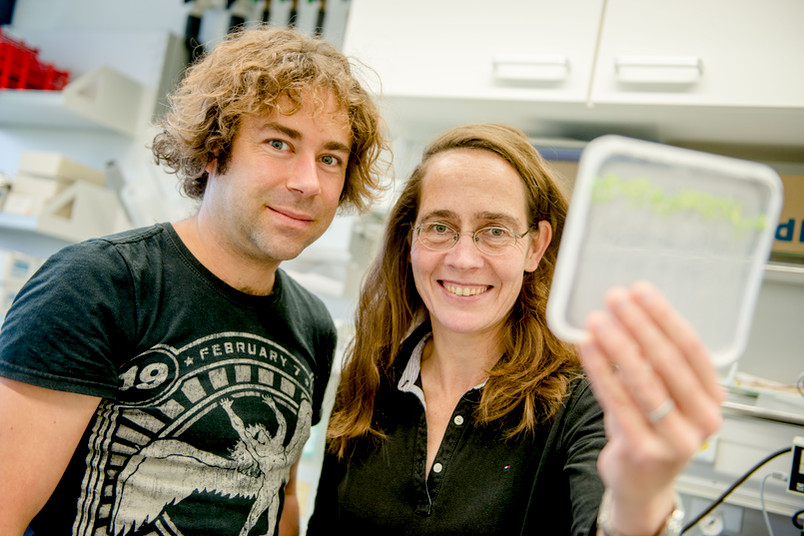 Why plants form sprouts in the dark

Exposed to light, plants turn green and form leaves. Not so in the dark. A signal responsible for this phenomenon has now been decoded.

A signal from the cell wall decides that, in the dark, seeds grow into long yellow sprouts, instead of turning green and forming leaves. The signal that switches on the darkness programme in seedling development has not hitherto been identified. Earlier studies had shown that these processes involve photoreceptors inside plant cells. One vital signal outside the cells has now been described by the team of Prof Dr Ute Krämer and Dr Scott Sinclair at Ruhr-Universität Bochum, in collaboration with Prof Dr Dominik Begerow, likewise from Bochum, as well as colleagues from Australia, France, Switzerland, and from the Max Planck Institute of Plant Breeding Research in Cologne, in the journal “Current Biology”. The article was published online on November 2, 2017.

“Cell walls are often considered dead matter that renders the cells stable,” says Ute Krämer, Head of the Department of Molecular Genetics and Physiology of Plants. “This view has been changing in the recent years.” The current study shows that the cell wall of plants is capable of switching between different development programmes.

The researchers analysed several mutants of Arabidopsis thaliana, the cell walls of which have an atypical composition. They compared their dark development with that of plants that did not feature any genetic changes.

Darkness programme ensures the survival of the seedling

A normal Arabidopsis thaliana with an intact cell wall forms sprouts in darkness, characterized by an elongated, etiolated grown form. “Thus, the seedling has a better chance to reach the surface of the earth in order to capture light, which is crucial for photosynthesis, before the energy reserves stored in the seed run out,” explains Scott Sinclair.

Some mutants with specific changes in cell wall composition did not have the ability to switch on the darkness programme. In darkness, they developed just like normal plants do in light. Additional analyses showed that these plants lacked certain metabolic breakdown products of pectin, a complex sugar molecule used as a gelling agent to make jam. The researchers hypothesise that plant cells use these metabolic products to communicate to other plant cells that the seedling is surrounded by darkness.