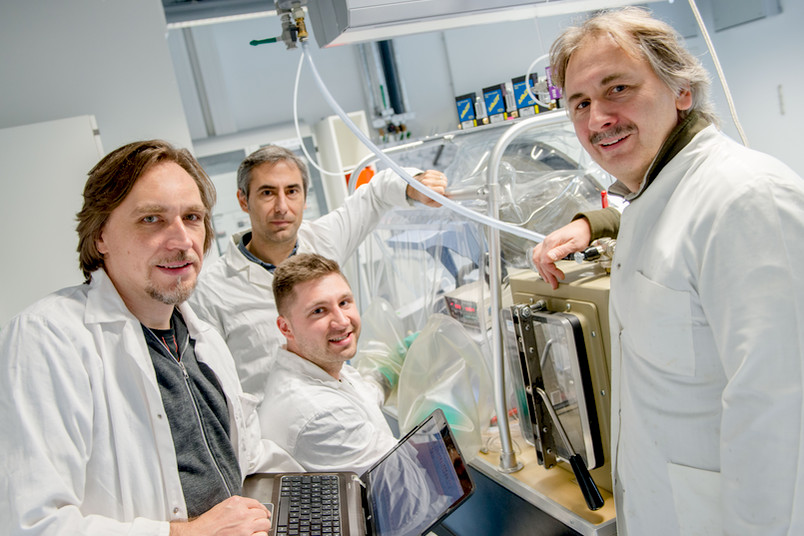 The Bochum scientists Martin Winkler, Oliver Lampret and Thomas Happe (from left to right) together with Olaf Rüdiger (in the background) from the Max Planck Institute
© RUB, Marquard
Hydrogen production

Biocatalysts are large protein molecules. The actual reaction takes place only at a small centrepiece. But the rest also plays a role.

The interaction of protein shell and active centre in hydrogen-producing enzymes is crucial for the efficiency of biocatalysts. A team from Ruhr-Universität Bochum and the Max Planck Institute for Chemical Energy Conversion in Mülheim an der Ruhr specifically analysed the role of hydrogen bonds in certain enzymes from green algae, the hydrogenases. The groups, which cooperate in the Excellence Cluster Resolv, reported the results in the Journal of the American Chemical Society.

“The findings not only contribute to the understanding of this globally recognized biocatalyst group, but also give applied research important pointers for the development of chemical catalysts modelled on the highly active biomolecule”, says Dr Martin Winkler from the Bochum-based working group Photobiotechnology.

The study was conducted on a special type of hydrogenases, so called [FeFe]-hydrogenases. They consist of a protein scaffold and an active centre, called H-cluster. The latter consists of six iron and six sulphur atoms as well as six unusual building blocks. This is the location where the actual synthesis of molecular hydrogen from protons and electrons takes place. “[FeFe]-hydrogenases are among the most powerful biocatalysts ever”, explains Prof Dr Thomas Happe, head of the working group Photobiotechnology. The communication between H-cluster and protein environment plays a crucial role.

It helps in the targeted delivery of the starting materials for the synthesis and in the efficient removal of the product. “Additionally, the protein shell ensures optimal spatial alignment of the H-cluster and protects it from damaging influences”, adds Oliver Lampret, who is writing his doctoral thesis on this topic.

The group from Bochum and its Mühlheim-based colleagues Dr Agnieszka Adamska-Venkatesh, Dr Olaf Rüdiger and Prof Dr Wolfgang Lubitz demonstrated that the hydrogen bonds between H-cluster and protein environment significantly influence the electrochemical properties of the active enzyme centre. They removed individual hydrogen bonds or added additional ones and studied the effects.

The manipulation changed both, the electron transport properties of the enzyme and the catalytic direction in which it works, because hydrogenases can produce hydrogen and also catalyse the reverse reaction, that is, the cleavage of molecular hydrogen to protons and electrons.

The influence of hydrogen bonds was demonstrated by the scientists using three different types of approaches: spectroscopy, electrochemistry and enzyme-kinetics.

The work was supported by the Max Planck Society, the German Research Society as part of the Excellence Cluster Resolv (EXC1069), the German-Israeli project cooperation as part of the project “Nanoengineered Optobioelectronics with Biomaterials and Bioinspired Assemblies” and the Volkswagen Foundation (LigH2t).