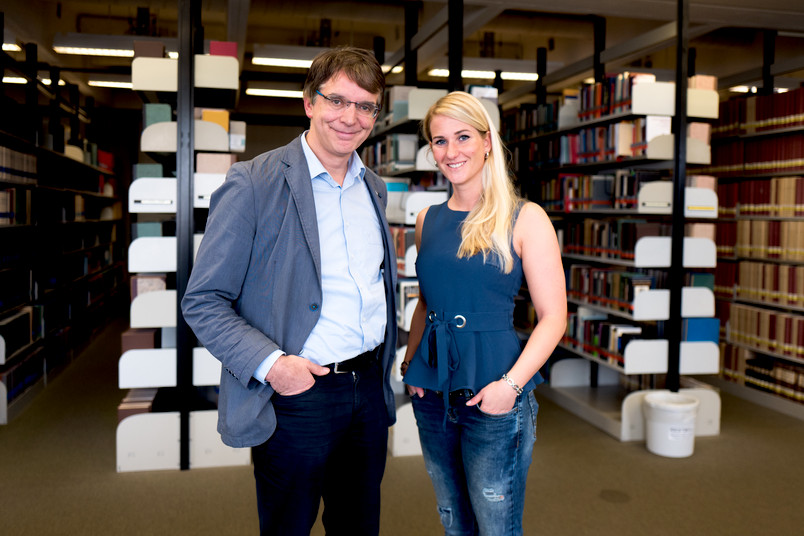 Humans make judgments in a way that does not conform to the ideas of moral philosophers – according to a conclusion drawn by Albert Newen (on the left) and Pascale Willemsen (on the right) who cooperated with Kai Kaspar from University of Cologne.
© RUB, Kramer
Philosophy

Why the boss always gets the blame

When it comes to offering blame, the boss always comes off worse than an employee. It appears this has nothing to do with whether he made the poor decision or not.

An employee receives significantly more praise if his actions result in positive consequences than his superior. An experiment conducted by a team of researchers from Bochum and Cologne has demonstrated that, unlike previously assumed, the acting person’s social status plays an important role when it comes to the distribution of praise and blame – rather than the extent to which an individual has influenced a given situation. The findings are described by philosophy scholars Prof Dr Albert Newen and Pascale Willemsen from Ruhr-Universität Bochum together with Prof Dr Dr Kai Kaspar from the University of Cologne in the journal “Philosophical Psychology”.

“In the field of ethics, it is typically assumed that the degree of praise or blame a person deserves is determined by three factors: what he did, how bad the consequences of his action are for other people, and what his intentions were,” says Pascale Willemsen. “But this is not how it works in real life.” A boss receives considerably more blame for the negative consequences of his actions than an employee.

Theories to date had assumed that praise and blame were determined by the extent to which an individual is able to exercise causal influence over something. “That means the reason why the boss is criticised more severely than the employee is because it was he who made the decision and, therefore, his causal influence over the situation was more significant,” explains Kai Kaspar. According to this theory, his social role as the boss is irrelevant.

Willemsen, Newen, and Kaspar tested this assumption in an online study with 209 test participants from the USA. The participants were asked to state their position on the following situation: rather than the boss, an employee makes an important decision in the company. Both employee and boss are aware that, while the decision is in the best interest of the enterprise, it will have a negative impact on the environment as a side-effect. Both explicitly state that they do not care about this side-effect.

In the experiment, the boss received more criticism than the employee, even though he did not personally make the decision. “We now have ample reason to assume that the social function plays a significant role in determining how much praise or criticism we allocate to a person for any negative consequences of their actions,” concludes Albert Newen.

“In the field of philosophical ethics, the social anchorage of ethical judgements has so far been disregarded,” points out Newen. “Even though empirical findings clearly indicate that humans make moral judgements in a way that does not comply with the ideas of moral philosophers.”

The study was financed by the Humboldt Foundation’s Anneliese Maier Research Award, which was awarded to the US-American visiting researcher Prof Shaun Gallagher for the collaboration with the team headed by Prof Albert Newen.