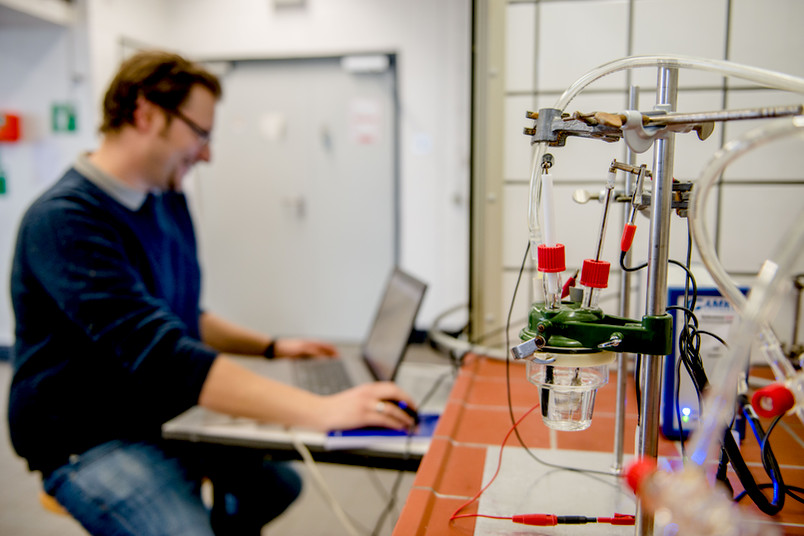 The fuel cell in the laboratory
© RUB, Marquard
Fuel Cells

A catalyst with self-defense against oxygen

On the route to cheap and efficient fuel cells.

Even traces of oxygen can deactivate molecular catalyst that are incorporated in fuel cells. Consequently, this drawback hampered the use of such catalyst based on abundant metals, which mimic the active center of natural biocatalyst, in technological relevant applications. Now, a team of researchers from the Ruhr-Universität Bochum (RUB), the Max-Planck-Institute for Energy Conversion in Mülheim and the from the Pacific Northwest National Laboratories in Washington, USA, was able to equip such a catalyst with a self-defense mechanism against molecular oxygen. Their results were published in Nature Communications, 28th February 2018.

An alternative for scarce and noble catalyst

Hydrogen is believed to be one of the most promising energy vectors in the future. Typically, catalyst based on noble and scarce materials like platinum are used for the use in highly efficient H2/O2 driven fuel cells. A promising alternative for this expensive and limiting catalyst materials are molecular catalysts based on abundant metals like nickel and/or iron, which resemble a mimic of the active center of nature’s highly active hydrogenases.

An interesting class of such molecular catalyst are the DuBois type complexes. Their active center comprises a central nickel-atom that is coordinated by pendant beases. These catalyst reveal a high activity which is similar to those of the hydrogenases and their ligand structure can be altered to enable catalysis in aqueous systems and allow for the covalent attachment to electrode surfaces. “The latter is of particular importance for technological applications since the immobilization enhances the performance of such fuel cell system” as it is explained by Prof Dr Wolfgang Schuhmann, Analytical Chemistry, RUB, member of the cluster of excellence Ruhr explores Solvation (Resolv).

A drawback of such catalyst is their high oxygen sensitivity, which hampered the use of this material in technological applications in current fuel cell systems. However, in analogy to the hydrogenases, that can be protected by incorporation for the biocatalyst into an oxygen reducing polymer matrix, the researchers were now able to transpose this protection system also to a DuBois-catalyst.

For the protection against oxygen, the researchers introduced a hydrophobic and redox-inactive polymer as immobilization matrix for the nickel-complex based catalyst. The embedment of the catalyst into the polymer matrix ensures the formation of two separated reaction layers: a catalytically active layer close to the electrode surface and a protection layer at the polymer/electrolyte interface. The first layer allows for an efficient conversion of hydrogen at the electrode surface and the second layer removes incoming oxygen at the interface and thus protects the active layer from oxygen damage.

According to Wolfgang Schuhmann, “the catalyst itself provides the protection against oxygen. For this, the catalyst uses electrons from the hydrogen oxidation in the outer polymer layer which are then used to reduce oxygen at the catalyst centers.” This becomes possible because the developed polymer matrix electrically disconnects the nickel-catalyst located in the outer polymer layer from the electrode surface. Hence, all electrons extracted from the hydrogen oxidation in the outer layer can be used for the reduction of harmful oxygen at the polymer/electrolyte interface.

The polymer/catalyst modified electrodes showed an excellent long-term stability and remarkable current densities which are both prerequisites for powerful fuel cells. The proposed hydrogen oxidation electrodes are thus a promising alternative for the development of sustainable and cost-efficient energy conversion systems.