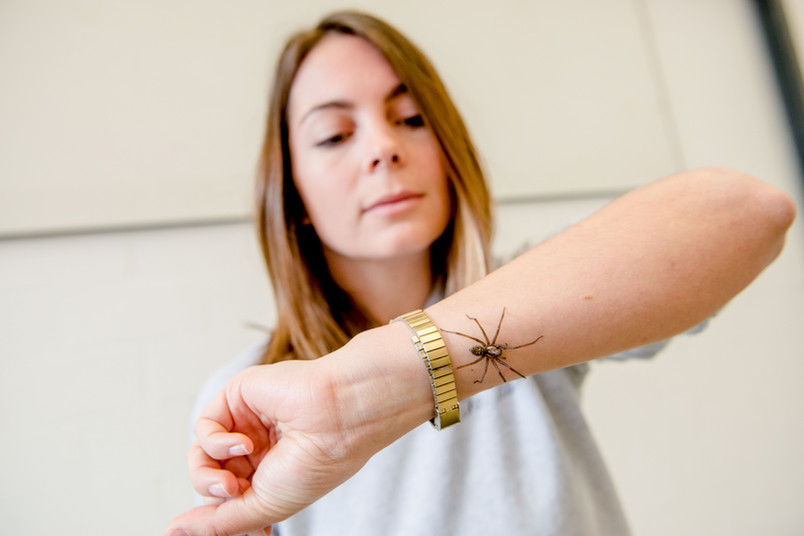 People suffering from arachnophobia can overcome it by exposing themselves progressively to the cause of their phobia. Extinction learning plays a role in the process.
© RUB, Marquard
Neuroscience

New findings on extinction learning may prove useful for therapies.

Stress can have a positive effect on extinction learning, which causes previously learned associations to dissolve. According to the findings of cognitive psychologists at Ruhr-Universität Bochum, stress causes extinction learning to occur independent of context. This might prove useful for example in therapies for anxiety disorders. Dr Shira Meir Drexler, Prof Dr Oliver Wolf, and assistant professor Dr Christian Merz from the Institute for Cognitive Neuroscience in Bochum outline their findings in the journal Behavior Therapy.

If two stimuli are repeatedly paired, the brain will at some point present the response to the first stimulus that should be elicited by the second stimulus. Experts speculate that this so-called conditioning is one of the causes of anxiety disorders. They can be treated by, for example, exposing the patient progressively to the object that triggers anxiety attacks. “It is generally assumed that extinction plays a vital role in exposure therapy,” says Christian Merz. In the process, patients learn new associations – for example that a previously fear-provoking stimulus does not mean danger.

“Extinction learning very much depends on the context, though,” explains Shira Meir Drexler and supplies an example: “If a person learns in their therapist’s practice that a spider is no cause for fear, they might still react with fear to arachnids in their own basement.”

The psychologists from Bochum have now demonstrated that such context dependence does not occur if extinction learning is preceded by a stressful situation. The study was conducted with 40 participants on three consecutive days. They were shown pictures on the computer screen of a desk lamp in an office. Every time the lamp lit up in a certain colour, it was followed by a mild electric stimulation of the skin that, though not painful, was unpleasant. Other colours were not accompanied by an electric stimulation. Thus, the participants learned to associate light of a certain colour with an unpleasant stimulus. 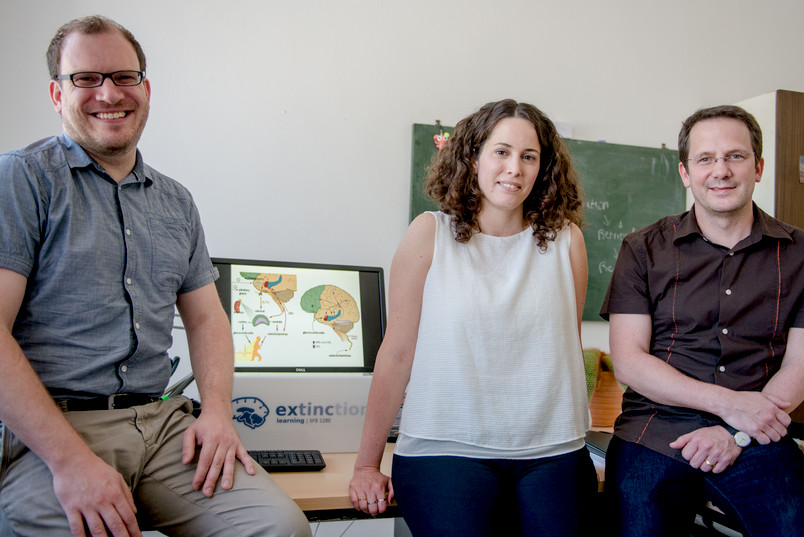 Christian Merz, Shira Meir Drexler and Oliver Wolf (from left) have studied in what way extinction learning is affected by stress.
© RUB, Marquard

By measuring skin conductance responses, the researchers demonstrated that, after a few trial rounds, the participants responded with fear to that colour of light as it was presented to them.

On the following day, 50 per cent of the cohort were exposed to a stressful situation: they had to hold one hand in ice water and were filmed and monitored by a supervisor. The other 50 per cent of the cohort were not subjected to the stress test. Subsequently, all participants were shown pictures of the lamp emitting coloured light, which were not followed by electric stimulations; however, the lamp was no longer located in an office but in a library. On the third day, the team presented the office and the library photos of the lamp emitting coloured light without following it up by electric stimulations.

In both the office and the library context, participants in the stress group responded less anxiously to the colour of light, which had preceded electric stimulations on the first day. They had transferred the knowledge that no unpleasant stimulus would follow from the library context to the office context. This was not the case in the non-stress cohort. The participants of this group continued to present an anxious response when they saw the colour of light in the office context that had been accompanied by electric stimulations on the first day. When presented library photos, they responded in the same way as the control group, i.e. showing no anxiety. For them, extinction learning occurred only in one specific context.

“Pharmacological studies have demonstrated that the treatment of anxiety disorders can be improved if the stress hormone cortisol is administered to the patients,” says Oliver Wolf. “Our study has produced evidence for an underlying mechanism.” Under the umbrella of the Collaborative Research Centre 1280, several research groups from Bochum are planning to investigate if an exposure to stress prior to exposure therapy may improve its efficacy.

The German Research Foundation financed the study under the framework of the Collaborative Research Centre 1280 “Extinction Learning”.