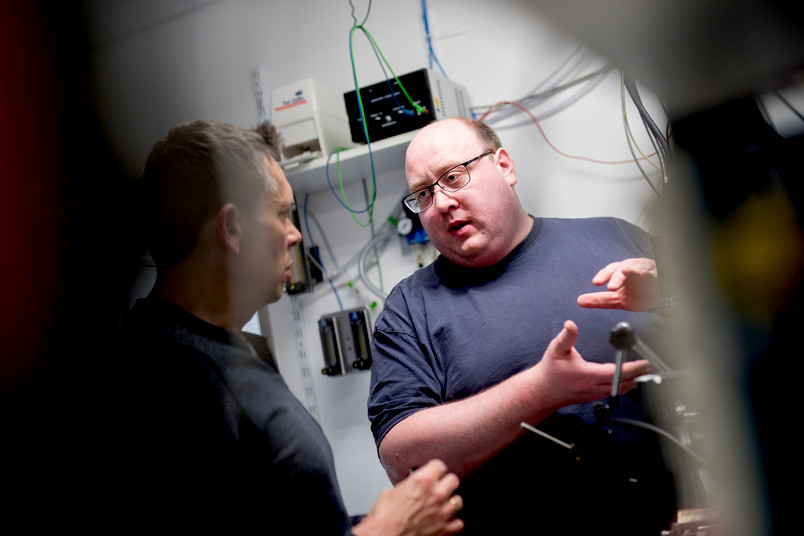 Dirk Jancke (on the left) and Robert Staadt, one of the study’s co-authors
© RUB, Kramer
Neuroscience

Effects of transcranial magnetic stimulation on the brain

The procedure facilitates reorganisation of connections between neurones which could be useful for therapies.

Researchers of the Ruhr-Universität Bochum have gained new insights on the question of how transcranial magnetic stimulation (TMS) effects functional interconnectivity of neurones. For visualisation, they employed fluorescent dyes which provide information on the activity of neurones by light. Using this technique, they showed in an animal model that TMS predisposes neuronal connections in the visual cortex of the brain for processes of reorganisation.

TMS is being used as a treatment for a number of brain diseases such as depression, Alzheimer’s disease and schizophrenia, but there has been little research on how exactly TMS works. The team of associate professor Dr Dirk Jancke of the Optical Imaging Lab in Bochum describes its new discoveries in the journal Proceedings of the National Academy of Science of the United States of America (June 4, 2018).

Examining the effects on cortical maps in the visual cortex

The researchers have investigated how TMS affects the organisation of so-called orientation maps in the visual part of the brain. Those maps are partly genetically determined and partly shaped by the interaction with our surroundings. In the visual cortex, for example, neurones respond to contrast edges of certain orientations, which typically constitute boundaries of objects. Neurones that preferably respond to edges of a specific orientation are closely grouped while clusters of neurones with other orientation preferences are gradually located further away, altogether forming a systematic map across all orientations. 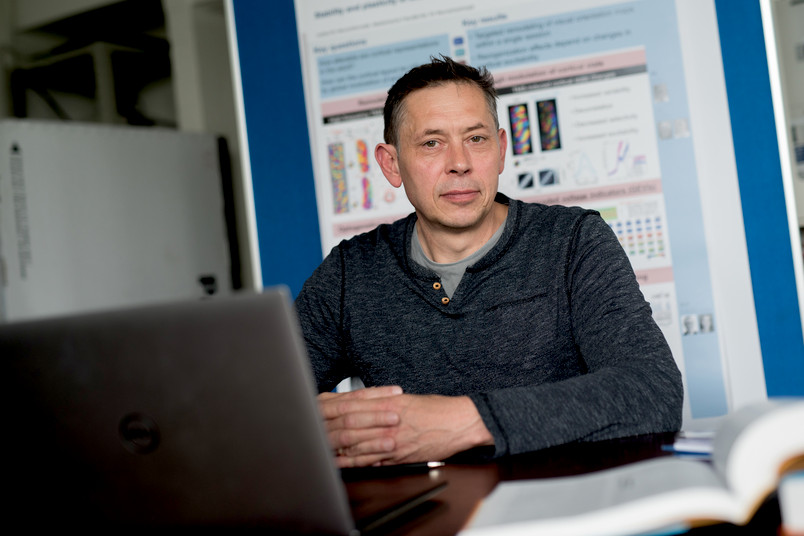 Dirk Jancke is Head of the Optical Imaging Lab at RUB
© RUB, Kramer

The team employed high frequency TMS and compared the behaviour of neurones to visual stimuli with a specific angular orientation before and after the procedure. The result: After the magnetic stimulation the neurones responded more variable, that is, their preference for a particular orientation was less pronounced than before the TMS. “You could say that after the TMS the neurones were somewhat undecided and hence, potentially open to new tasks”, explains Dirk Jancke. “Therefore, we reasoned that the treatment provides us with a time window for the induction of plastic processes during which neurons can change their functional preference.”

The team then looked into the impact of a passive visual training after TMS treatment. 20-minutes of exposure to images of a specific angular orientation led to enlargement of those areas of the brain representing the trained orientation. “Thus, the map in the visual cortex has incorporated the bias in information content of the preceding visual stimulation by changing its layout within a short time,” says Jancke. “Such a procedure – that is a targeted sensory or motor training after TMS to modify the brain’s connectivity pattern – might be a useful approach to therapeutic interventions as well as for specific forms of sensory-motor training,” explains Dirk Jancke.

Transcranial magnetic stimulation is a non-invasive painless procedure: A solenoid is being positioned above the head and the brain area in question can be activated or inhibited by means of magnetic waves. So far little is known about the impact of the procedure on a cellular network level, because the strong magnetic field of the TMS superimposes signals that are used by researchers in order to monitor the neuronal effects of the TMS. The magnetic pulse interferes in particular with electrical measurement techniques, such as EEG. In addition, other procedures used in human participants, e.g. functional magnetic resonance imaging, are too slow or their spatial resolution is too low.

Dirk Jancke’s team used voltage dependent fluorescent dyes, embedded in the membranes of the neurones, in order to measure the brain’s activity after the TMS with high spatiotemporal resolution. As soon as a neurone’s activity is modulated, the dye molecules change emission intensity. Light signals therefore provide information about immediate changes in activity of groups of neurones.

The research project has been funded by the Deutsche Forschungsgemeinschaft as part of the Collaborative Research Centre 874 (Project A2, Eysel/Jancke), which explores the question of how the brain processes sensory information at the Ruhr-Universität Bochum since 2010. Furthermore the study has been supported by the German-Israeli Project Cooperation (DIP, JA 945/3-1, SL 185/1-1), the priority programme (Schwerpunktprogramm) 1665 (JA 945/4-1) and the Federal Ministry of Education and Research.