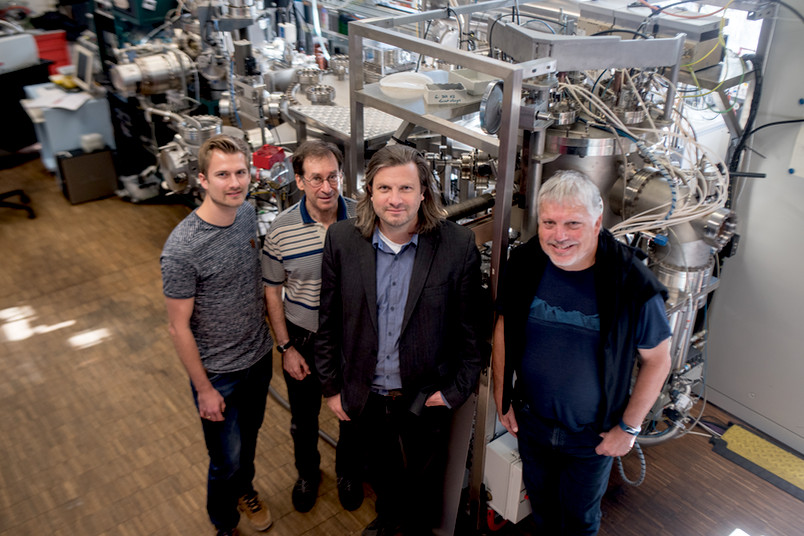 The industry has been traditionally deploying platinum alloys as catalysts for oxygen reduction, which is for example essential in fuel cells or metal-air batteries. Expensive and rare, that metal imposes strict restrictions on manufacture. Researchers at Ruhr-Universität Bochum (RUB) and Max-Planck-Institut für Eisenforschung have discovered an alloy made up of five elements that is noble metal-free and as active as platinum. They published their paper in the journal Advanced Energy Materials on october 21, 2018.

The catalytic properties of non-noble elements and their alloys are usually rather poor. To the researchers’ surprise, one alloy made up of five almost equally balanced components offer much better properties. This is because of the so-called high entropy effect. It causes multinary alloys to maintain a simple crystal structure.

“Through the interaction of different neighbouring elements, new active centres are formed that present entirely new properties and are therefore no longer bound to the limited properties of the individual elements,” explains Tobias Löffler, PhD student at the RUB Chair of Analytical Chemistry – Center for Electrochemical Sciences headed by Professor Wolfgang Schuhmann. “Our research has demonstrated that this alloy might be relevant for catalysis.”

Searching for an alternative to platinum, researchers at the RUB Chair of Materials for Microtechnology headed by Professor Alfred Ludwig deployed a special method to generate an alloy nanoparticle library of five source elements. Their atoms blend in plasma and form nanoparticles in a substrate of ionic liquid. The liquid is placed in small cavities on a carrier.

If the nanoparticles are located in the vicinity of the respective atom source, the percentage of atoms from that source is higher in the respective particle. In the centre of the carrier, all five elements are present in more or less equal quantities. “This combinatorial process enables us to precisely control the composition of the alloy nanoparticles anywhere in the material library,” says Alfred Ludwig.

Headed by Professor Christina Scheu, the research team at the Max-Planck-Institut für Eisenforschung analysed the thus generated nanoparticles using transmission electron microscopy. RUB chemists determined their catalytic activity and compared it with that of platinum nanoparticles.

In the process, they identified a system made of up five elements where the high entropy effect results in catalytic activity for an oxygen reduction that is similar to that of platinum. By optimising the composition further, they successfully improved the overall activity.

“These findings may have far-reaching consequences for electrocatalysis in general,” surmises Wolfgang Schuhmann. The researchers are hoping to adapt the properties for any required reactions by taking advantage of the almost infinite number of possible combinations of the elements and modifications of their composition. “Accordingly, the application will not necessarily be limited to oxygen reduction,” says Ludwig. The research team has already applied for a patent.

However, as the interplay of the elements is not fully understood, the researchers cannot develop any specific catalysts as yet. “This research project lays the foundation for further studies to gain a better understanding of the process, and it introduces high-entropy alloys made up of multiple elements as a new catalyst category,” point out the researchers.

The project was funded by the Federal Ministry of Education and Research (NEMEZU, FKZ 03SF0497B and Mangan (FKZ 03EK3548)) and by the German Research Foundation (LU1175/23-1, SCHE634/21-1, Exploring Multinary Nanoparticles by Combinatorial Sputtering into Ionic Liquids and Advanced Transmission Electron Microscopy) as well as under the umbrella of the Transregio Collaborative Research Centre 247 and the Cluster of Excellence Ruhr explores Solvation, short Resolv (EXC1069).