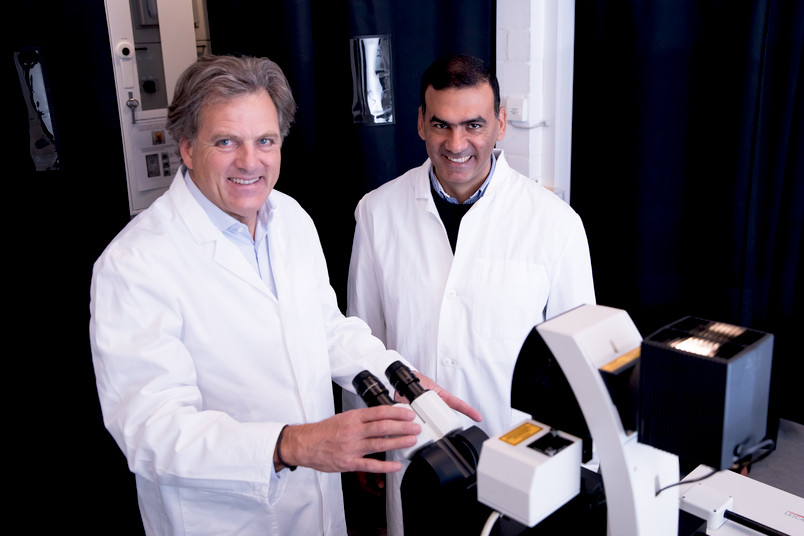 Traditional approaches are based on antibodies or markers. The new method doesn’t need such aids.

Biophysicists at Ruhr-Universität Bochum (RUB) have demonstrated that Raman microscopy can be used to detect the resistance of tumour cells to cancer drugs. Unlike conventional approaches, this method does not require any antibodies or markers. It detects the response of cells to administered drugs and therefore could determine the effect of drugs in preclinical studies.

For their study, the researchers used the drugs erlotinib and osimertinib, which are available under the trade names Tarceva and Tagrisso, respectively, and have been approved for lung cancer therapy. They inhibit cell growth by binding to specific proteins on the cell surface. However, patients develop resistance to the drugs in the course of therapy, because of protein changes in cancer cells.

“In order to understand how such resistance develops, we have to be able to better analyse the drugs’ mechanism of action,” says Klaus Gerwert. “Raman microscopy can help to develop better cancer drugs,” adds Samir El-Mashtoly. “It would be a great advantage if we could predict if a drug causes resistance in preclinical studies.”

In recent years, Samir El-Mashtoly and Klaus Gerwert have developed novel marker-free methods of Raman spectroscopy to determine the efficacy and distribution of drugs in cancer cells. For their current study, they mutated proteins in cancer cell lines, in order to simulate protein changes that occur in patients with drug resistance.

To date, it had been challenging to conduct such experiments in vitro – i.e. in a cell culture; rather, they had to be performed with patients. “Consequently, the analysis of drug resistance can now be significantly facilitated,” explains Klaus Gerwert. Using Raman microscopy, the researchers compared the efficacy of the drugs erlotinib and osimertinib in mutated and non-mutated cells.

Raman microscopy can be used to generate a spectroscopic fingerprint of a cell’s molecular composition. A comparison of the spectra before and after the drug treatment provides an indication of the chemical processes triggered by the drug.

Resistance only in mutated cells

Erlotinib and osimertinib remained ineffective in cells with mutated proteins, while the drugs showed an effect in the non-mutated cancer cells. These results match the clinical observations that patients in whom certain proteins have changed in the course of therapy no longer respond to the drugs. Accordingly, the same resistance was detected in cells that had only been observed in patients before.

In conventional tests, the efficacy of drugs is analysed indirectly using markers that are attached to the drug or its target. “Using this approach, the response of one single protein, i.e. the marker, is analysed,” explains Klaus Gerwert. “Raman microscopy, on the other hand, monitors an integral cell response; therefore, it is one of the methods that can test the efficacy of drugs in vitro.”

The state of North Rhine-Westphalia funded the project within the framework of the European protein research network “Pure”.