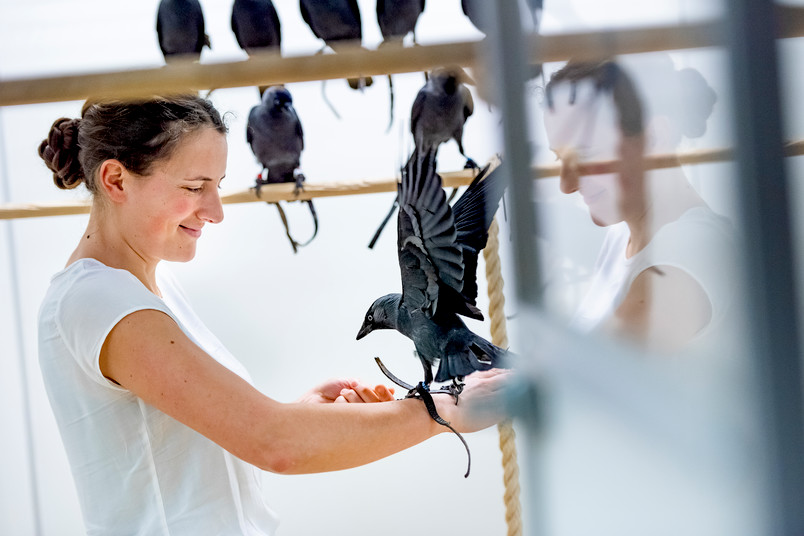 PhD researcher Aylin Klarer spends a lot of time with jackdaws – she has to, because the wild birds are extremely wary when faced with anything new.
© Damian Gorczany
Neuroscience

How jackdaws remember what they did where and when

Time and patience are crucial in order to work with the eccentric corvids. Still, they are among the most intelligent birds in the avian kingdom.

Corvids are capable of cognitive feats that almost resemble those of humans. Neuroscientists at Ruhr-Universität Bochum (RUB) intend to find out how their brain manages to fulfil such complex tasks – although its structure is completely different than that of the human brain. For a year, the researchers have been training two jackdaws in a complex behavioural experiment, where the birds learn to remember what they did where and when. The underlying processes in the brain are to be determined through subsequent neurophysiological analyses. An article on the research conducted by the work group Avian Cognitive Neuroscience, headed by Dr. Jonas Rose, has been published in the RUB’s science magazine Rubin.

For the purpose of the experiment, the animals learn to remember a sequence of locations that they visited and the colours they saw there. They have then to retrieve that information in a different location; if they do everything right, they are rewarded with food. The researchers use this task to study the basis of the so-called episodic memory. It stores unique events and is based on the fact that individuals are able to remember what they did where and when. Other groups have demonstrated in other behavioural experiments that corvids have this ability. However, the neural basis of that ability has as yet not been analysed.

At RUB, the jackdaws complete the experiment in a hexagonal aviary, where they have been undergoing daily training of approximately two and a half hours for the past year. The aviary is fitted out with touchscreens on four walls. On three of them, dots in different colours appear that the animals have to pick. Only after the first dot has been picked does the next one appear, etc. In a fourth location, the bird then has to retrieve the information which colour it saw in which location.

Learned in a month

In order to retrieve the sequence of the locations, the animal had first learned to allocate symbols to the locations: a camping site, bathroom, and a port. However, the symbols are never presented in the locations themselves. The jackdaws only see them on the fourth touchscreen, where they have to provide their answer. Initially, they used to pick the symbols at random; only if they hit the correct sequence, they were rewarded with food. Thus, they learned to allocate camping site, bathroom and port to one of the other three touchscreens.

“We weren’t sure if the animals would be able to learn this,” explains Jonas Rose. “But then, they did it quite fast, within the space of one month.” In 60 to 80 per cent of all experiment rounds, the animals list all three locations correctly. In this experiment design, the probability of getting the answer right by guessing is approximately 17 per cent.

Now, the birds are training to remember which colour they saw at which location, with the sequence of locations and the allocation of colours changing in each round. At first, the jackdaws struggled quite a bit. “We are trying to determine if the animals’ working memory simply can’t cope with so much information,” explains Rose, “or if they struggle with the colour task as such.”

To this end, the researchers don’t require the jackdaws to allocate colours to locations in every trial; rather, in some trials the birds only have to list either the sequence of locations or the sequence of colours. Today, the animals answer correctly in 20 per cent of all experiment rounds where they have to name both locations and colours; thus, they score higher than the probability of guessing, which amounts to 5.5 per cent. The biopsychologists from Bochum are therefore still confident that the animals can learn the task. If not, they will gradually simplify the experiment.

For his studies, Jonas Rose receives a grant through Collaborative Research Centre 874, financed by the German Research Foundation, and through a Freigeist Fellowship provided by the Volkswagen Foundation that has been specifically established to fund research projects that break new ground and the outcome of which is uncertain.

You can find a detailed article on the research conducted with corvids and the challenges associated therewith in the science magazine Rubin. Texts on the website and images on the download page are free to use for editorial purposes, provided the relevant copyright notice is included.