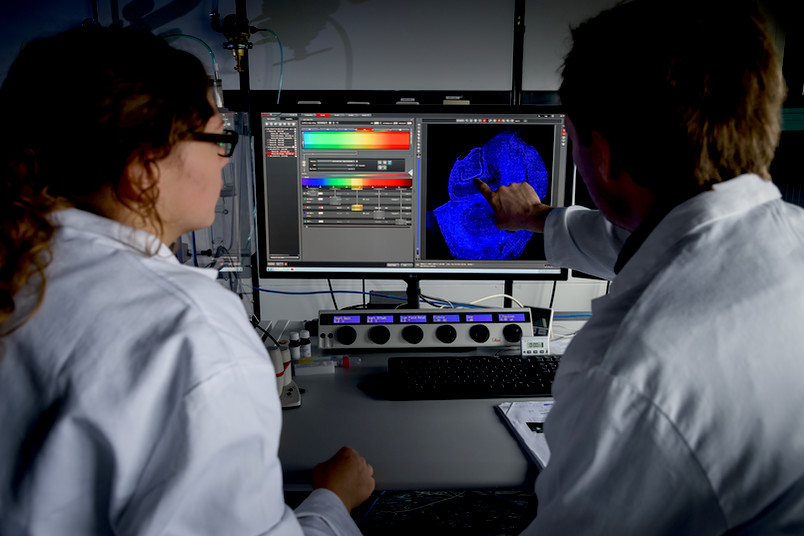 Sophia Meermeyer and Thorsten Müller analyse a brain slice taken from human hippocampus. This type of tissue is most frequently affected by Alzheimer’s disease. The nuclei are dyed blue.
© Roberto Schirdewahn
Biochemistry

The causes of the disease are for the most part obscure. Researchers intend to expose them using cerebral organoids grown from stem cells.

In the majority of cases, dementia can be traced back to Alzheimer’s disease. Its causes are not really understood yet. What is known is that plaques form from misfolded proteins and that there is an increase in neuronal cell death levels in the brain. However, the plaques don’t necessarily go hand in hand with any symptoms. Dr. Thorsten Müller, Head of the research group Cell Signalling at the Chair of Molecular Biochemistry at Ruhr-Universität Bochum (RUB), suspects other deposits to cause the disease, namely ones that form in the nuclei. He intends to verify this hypothesis using tissue that resembles that of the brain. Rubin, the RUB’s science magazine, published a report on his research.

Typically only one cleavage

The amyloid precursor protein APP is the precursor substance of both deposit types. It is embedded in the cell membrane of neuronal cells, protruding from it on both the inside and the outside. Typically, the protein is cleaved only once near the middle. The cleaved fragment inside the cell is unstable and disintegrates.

In Alzheimer’s patients, the protein is cleaved twice and is thus split into three parts. The middle parts resulting from several cleavages agglutinate and form plaques outside the neuronal cells that are typical of Alzheimer’s disease. The cleaved fragment inside the cell is stable. Its interaction with another protein passes through several interim stages and finally results in the residue migrating into the cell nucleus. There, residues accumulate over time, forming complexes. “In cell culture experiments, this process leads to cell death,” says Müller.

Still, he is cautious to conclude that this is actually how Alzheimer’s disease originates, as there is a big difference between cell culture and living brain.

The new method aims at bridging that gap. So-called organoids from stem cells that can be harvested from an adult organism assume the function of a mini brain. The researchers have a number of tricks at their disposal to make the mini brains age artificially. One of the methods is, for example, oxidative stress, which can be induced by adding hydrogen peroxide, or through UV radiation that causes damage to the genetic makeup.

The unique trick employed by the Bochum-based group is to alter the genetic makeup of the stem cells from which the mini brains are formed. “We utilise the Crispr/Cas method for this purpose – so-called genetic scissors,” points out Thorsten Müller. “Unlike many other researchers, we do not simply switch off individual genes; rather, we inject specific components.”

The components in question are markers such as green fluorescent protein (GFP) or marker sequences in different colours. By inserting markers in different colours at, for example, the beginning and the end of a gene sequence that contains the APP blueprint they are able to trace precisely where the protein or its cleaved fragments migrate.

Verification in a living system

In a first step, the researchers have thus been able to verify the findings gathered in cell cultures in a living system. “Using lab-grown tissue that resembles that of the brain, we have now the opportunity to gain new insights in Alzheimer’s research, which is once again in its infancy,” explains Thorsten Müller. Last but not least, a system like that may render animal testing obsolete – the researchers’ last resort when they have no alternatives.

You can find a detailed article on this topic in the science magazine Rubin. Texts on the website and images on the download page are free to use for editorial purposes, provided the relevant copyright notice is included