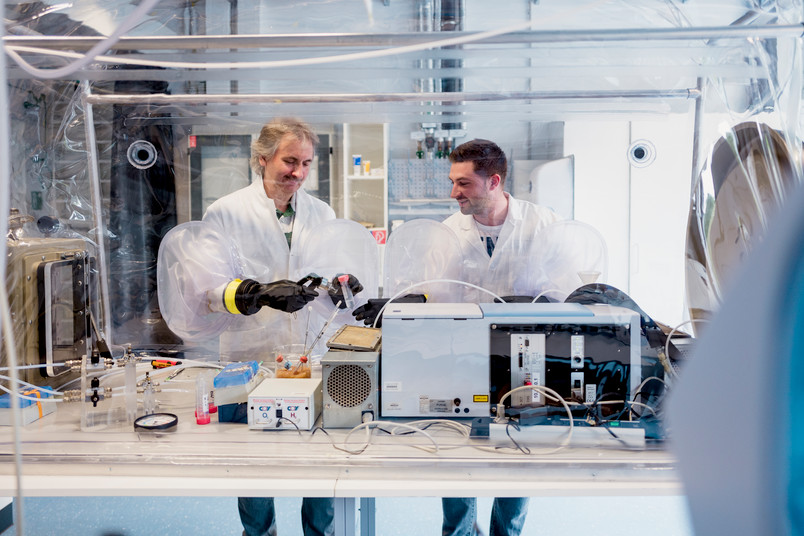 The heart of the biological catalyst is only introduced during the last step. The process is complex.

A team from Ruhr-Universität Bochum and the University of Oxford has discovered how hydrogen-producing enzymes, called hydrogenases, are activated during their biosynthesis. They showed how the cofactor – part of the active centre and also the heart of the enzyme – is introduced inside.

Hydrogenases are of biotechnological interest as they are able to efficiently produce hydrogen. “In order to optimise them for an industrial application, we first need to understand the process of how the protein shell takes up and activates the chemical cofactor,” says Professor Thomas Happe. A team led by Oliver Lampret and Thomas Happe from the Bochum-based Photobiotechnology Research Group published the results in the journal “Proceedings of the National Academy of Sciences”, PNAS for short, on 23 July 2019.

The researchers investigated the subgroup of [FeFe]-hydrogenases, which are the most efficient hydrogen producers. In nature, they can be found in green algae. Within their protein scaffold, the enzymes have an active centre, the so-called H-cluster, where the hydrogen is produced. It is comprised of two structural elements: a cluster containing four iron and four sulphur atoms, and the catalytic cofactor, which consists of two iron and two sulphur atoms. “This cofactor is the linchpin of the enzyme,” explains Oliver Lampret.

In nature, the cofactor is subsequently incorporated into the enzyme following the biosynthesis of the protein scaffold – a highly complex process. Only then is the hydrogenase catalytically active. The researchers clarified the precise sequence of the process using protein engineering, protein film electrochemistry and infrared spectroscopy.

The team showed that the negatively charged cofactor is specifically transported through a positively charged maturation channel into the interior of the enzyme before it is firmly anchored into the protein shell. Particularly flexible structural elements act as hinges here, ensuring that the protein folds differently and firmly envelopes and protects the integrated cofactor. The interaction of protein environment and cofactor is essential in order to stabilise the cofactor in its catalytic form.

“We assume that not only do [FeFe]-hydrogenases obtain their cofactor in this way but that the mechanism also occurs in other metalliferous enzymes,” says Happe.

The work was supported by the German Research Foundation as part of the Cluster of Excellence Resolv (EXC 2033, project number 390677874) and the Research Training Group GRK 2341 “Microbial Substrate Conversion” and by the Volkswagen Foundation (93412).