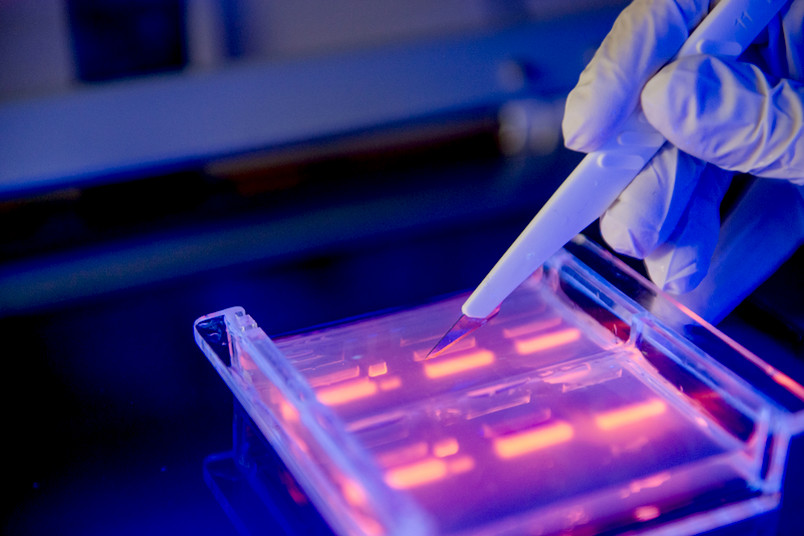 Supposed disorder is not disorder after all

A team of researchers from Bochum has investigated the function of a protein, the malfunction of which leads to cancer.

While the correct function of many proteins depends on their three-dimensional structure, some appear to adopt random forms. For one of them, a team of researchers at Ruhr-Universität Bochum (RUB) has shown that the supposed disorder is not disorder after all: the protein HMGA1a adopts dynamic, more compact structures that depend on its phosphorylation. A malfunction of HMGA1a can lead to cancer. The researchers led by Professor Raphael Stoll therefore expect their results to form a basis for future therapeutic strategies to combat cancers caused by HMGA1a. They report in the journal Nucleic Acids Research on July, 24 2019.

Many – but not all – proteins in a living cell have a defined three-dimensional structure, which is absolutely necessary for their correct activity. The interrelationship between the structure and function of proteins is the focus of many research initiatives that extend to the development of innovative drugs.

At least 30 per cent of all proteins are unstructured

“However, based on recent research results, it is predicted that at least 30 per cent of all proteins in cells containing a nucleus are partially or even completely unstructured,” says Raphael Stoll, head of the Biomolecular Spectroscopy research group. Despite or precisely because of this remarkable feature, these proteins have special, sometimes crucial, functions in both healthy and disease-causing processes. These include, for example, the regulation of the cell cycle, the transmission of biological signals, and the development of cancer or neurodegenerative diseases such as Alzheimer’s or Parkinson’s disease.
One of these seemingly disordered proteins is the high-mobility group protein A1a (HMGA1a). It is highly abundant in the cell nucleus and is important for embryonic development, cell differentiation, and is also involved in the development of uncontrolled cell proliferations, called neoplasia.

The Bochum-based research team has succeeded in showing for the first time that the HMGA1a protein does not adopt completely random forms, but rather dynamic, more compact structures. This enabled the researchers to create the first full-length structural model of the HMGA1a protein.

They were also able to describe the structural effects of the phosphorylation of the HMGA1a protein on its function. The attachment of phosphoryl groups alters the function of many proteins and they are thus switched on or off. Phosphoryl groups can also influence the protein’s ability to bind to other cell components. HMGA1a binds to DNA. This process is very important for its biological mode of action as HMGA1a, for example, is involved in regulating the formation of RNA and reorganising chromosomes.

The researchers applied nuclear magnetic resonance spectroscopy, which is able to provide information not only on the structure but also on the dynamics of proteins. “Our results show that the dynamic and compact structures of this protein depend on its phosphorylation state,” reports Raphael Stoll. Within the cell, the HMGA1a protein is phosphorylated by casein kinase 2. This has an effect on the electrostatic network in the HMGA1a protein and thus changes the dynamic structural ensemble of this protein. Further experiments revealed that these changes even affect the ability of the HMGA1a protein to bind to its natural target sequence in the DNA of the cell nucleus.

The work was supported by the German Research Foundation (DFG) and the RUB Research School Plus.