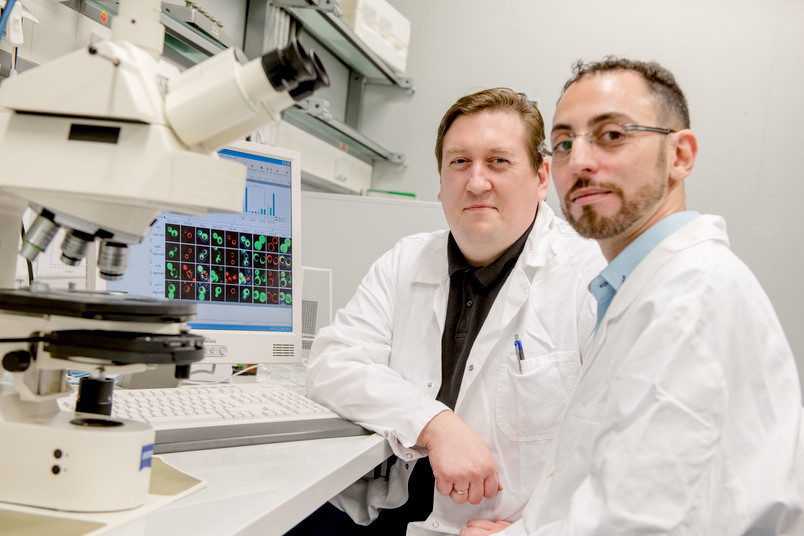 New findings on the recycling centres of cells

Both animal and plant cells depend on their own damaged or superfluous cell material being removed – a process referred to as autophagy. The degradation of substrates is done by proteins. In animals, it takes place in a cell organelle called the lysosome and in plants and yeasts in the vacuole. Initially, the degradation proteins are not located in the vacuole or lysosome; rather, they must be conveyed by transport receptors on small vesicles to their site of action.

The team at the Biochemistry of Intracellular Transport research group at Ruhr-Universität Bochum (RUB), headed by Dr. Harald Platta, has successfully demonstrated how indispensable the Vps10 transport receptor is for the process.

In a second study, the researchers analysed the protein Vac8, which regulates the fusion of small and large vesicles with the vacuole membrane so that the respective load can be released into the interior of the vacuole.

The results were published in June and July 2019 in the Scientific Reports und Cells journals.

Indispensable for the degradation of complex substrates

The researchers demonstrated that the transport receptor Vps10, which in plants and yeasts directs the degradation protein Pro-Pep4 from the endoplasmic reticulum to the vacuole, is not just one of several exchangeable receptors. “Rather, Vps10 contributes significantly to the activity of the vacuole during the degradation of the cell’s own components by effectively transporting Pro-Pep4,” says Harald Platta.

Without Vps10, whose counterpart in human cells is called sortilin, Pro-Pep4 can’t be efficiently transported to the vacuole and activated to Pep4, which is called cathepsin D in humans.

While the degradation of the occasional small proteins and ribosomes in the vacuole is still possible without Vps10, it emerged that the degradation of complex substrates, such as peroxisomes or mitochondria, can no longer take place effectively without Vps10 and is associated with a malfunction and thus inefficient maturation of Pro-Pep4.

“The findings from this study are also relevant for follow-up questions,” explains Platta. “Pep4 determines, for example, the toxicity of various fungi that are harmful to plants. Moreover, Pep4 protects yeast cells from the spontaneous formation of prions, i.e. specific harmful protein particles, while the loss of Pep4 activity results in a shortened lifespan. In mammals, a deficiency of the mature Pep4 homologue cathepsin D leads to neurodegenerative disorders. And the malfunction of pro-cathepsin D has been observed in various forms of cancer.”

Vesicles and vacuole membranes must fuse with each other

The second study analysed the protein Vac8, which is closely related to the mammalian proteins plakoglobin, a tumour suppressor, and catenin. While the latter mediate cell-cell contacts at the plasma membrane, Vac8 regulates the fusion of the membranes of transport vesicles with the vacuolar membrane within the cell. These are either small vesicles containing degradation proteins or large vesicles loaded with the substrates that are to be degraded.

Contrary to what one might assume, the fusion of the membranes does not seem to take place by binding to other proteins, but, as the researchers have demonstrated, via the coordination of lipids. “In the course of the study, we were able to show that the fusion and degrading activity of the vacuole in Vac8-deficient cells could be regenerated by the experimental addition of the membrane lipid building blocks oleic acid and glycerol,” says Harald Platta. According to the researchers, this is why Vac8 plays a crucial role in the autophagic degradation of all tested substrates – cytosolic proteins, ribosomes and peroxisomes.

Consequently, Vac8 appears not only to act as a simple adapter molecule between two membranes, but may also define the composition of the surrounding lipids in order to prepare the contact between the two membranes. “This raises interesting new questions about the identity of the lipid types involved,” as Harald Platta outlines potential future research questions.

The German Research Foundation funded the project under the umbrella of the PerTrans FOR1905 research group.