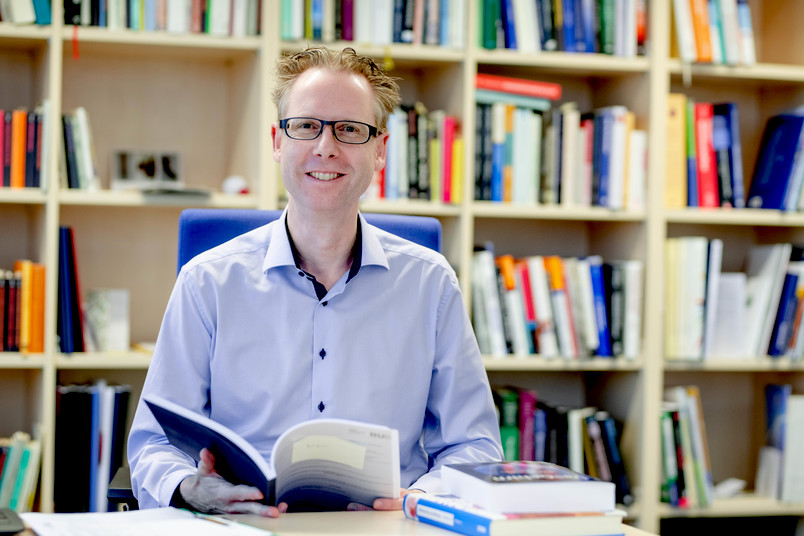 Nikolai Axmacher is Head of the Department of Neuropsychology at Ruhr-Universität Bochum.
© RUB, Marquard
Research funding

Backed by funding from the European Research Council, Nikolai Axmacher hopes to find out how the brain manages spatial navigation. The results will also be relevant for Alzheimer’s research.

Professor Nikolai Axmacher from Ruhr-Universität Bochum (RUB) has received a Consolidator Grant from the European Research Council (ERC) for his research on the neuronal basics of spatial navigation in humans. The grant amounts to 2 million euros over five years. Among other things, Axmacher is interested in grid cells that are believed to play a central role in rodent navigation, but whose function in humans is largely unknown. The research could also provide new insights into early brain changes in Alzheimer’s disease.

The researchers also intend to determine the patterns of grid cell activity much more precisely than before using high-resolution imaging techniques. “Among other things, we want to understand exactly which role these cells play in spatial navigation and whether they also support other cognitive processes,” outlines Axmacher.

Moreover, the researchers are planning to investigate whether altered grid cell patterns are related to pathological changes in Alzheimer’s disease and – if so – whether these processes can be manipulated by drugs. The entorhinal cortex, in which the grid cells are located, is one of the first brain regions to be altered by Alzheimer’s disease. “There is ample evidence that the first brain changes precede clinical symptoms by decades,” says Nikolai Axmacher. “Current research into Alzheimer’s is therefore aiming at gaining a better understanding of these early abnormalities.” For one, the researchers are hoping that an altered grid cell pattern could be an early marker for Alzheimer’s disease.

Nikolai Axmacher initially studied philosophy at Freie Universität Berlin, before switching over to medicine, in which he graduated at Charité Berlin in 2004. He received his doctorate in 2005 from the Institute for Physiology and the Institute for Theoretical Biology at Humboldt-Universität Berlin. Four years later he completed his habilitation. From 2004 to 2011, Axmacher worked as a clinical researcher at the Department of Epileptology at the Bonn university hospital, where he subsequently headed an Emmy Noether Group until 2014. At the same time, he was head of a junior research group at the German Centre for Neurodegenerative Diseases in Bonn. In 2014, he accepted an appointment at RUB and became professor of neuropsychology. Axmacher is an elected member of the Memory Disorders Research Society, Advisory Board Member of the Transfaculty Research Platform Molecular and Cognitive Neurosciences at the University of Basel, and board member at the RUB Research Department of Neuroscience. In 2019, he received the teaching award of the Faculty of Psychology. Since 2019, he additionally became co-director of the Beijing Center for Intracranial EEG Research at Beijing Normal University.