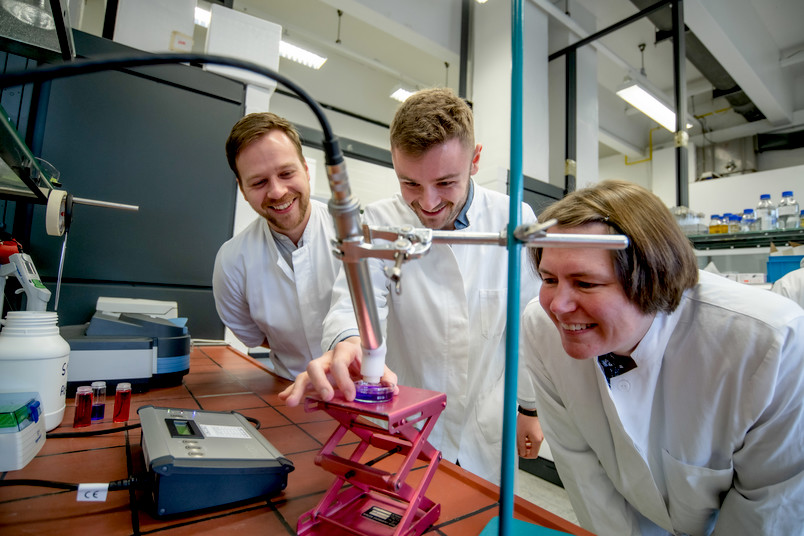 A research team from Bochum has developed a new method to drive catalytically active enzymes.

Compared with traditional chemical methods, enzyme catalysis has numerous advantages. But it also has weaknesses. Some enzymes are not very stable. Enzymes that convert hydrogen peroxide are even inactivated by high concentrations of the substrate. A research team at Ruhr-Universität Bochum (RUB), together with international partners, has developed a process in which the starting material, i.e. hydrogen peroxide, is fed to the biocatalysts in a controlled manner using plasma. The enzymes themselves are protected from harmful components of the plasma by a buffer layer. Using two model enzymes, the team showed that the process works, as reported in the journal “ChemSusChem” from 5 February 2020.

In biocatalysis, chemicals are produced by cells or their components, in particular by enzymes. Biocatalysis has many advantages over traditional chemical processes: the reaction conditions are usually much milder, energy consumption is lower and less toxic waste is produced. The high specificity of enzymes also means that fewer side reactions occur. Moreover, some fine chemicals can only be synthesised by biocatalysis.

The weak spot of enzyme biocatalysis is the low stability of some enzymes. “Since the enzyme often has to be replaced in such cases – which is expensive – it is extremely important to increase the stability under production conditions,” explains lead author Abdulkadir Yayci from the Chair of Applied Microbiology headed by Professor Julia Bandow.

The research team has been studying two similar classes of enzymes: peroxidases and peroxygenases. Both use hydrogen peroxide as a starting material for oxidations. The crucial problem is that hydrogen peroxide is absolutely necessary for activity, but in higher concentrations it leads to a loss of activity of the enzymes. As far as these enzyme classes are concerned, it is therefore vital to supply hydrogen peroxide in precise doses.

To this end, the researchers investigated plasmas as a source of hydrogen peroxide. Plasma describes the fourth state of matter that is created when energy is added to a gas. If liquids are treated with plasmas, a large number of reactive oxygen and nitrogen species are formed, some of which then react to form long-lived hydrogen peroxide, which can be used for biocatalysis.

In an experiment in which horseradish peroxidase served as one of the model enzymes, the team showed that this system works in principle. At the same time, the researchers identified the weak points of plasma treatment: “Plasma treatment also directly attacks and inactivates the enzymes, most likely through the highly reactive, short-lived species in the plasma-treated liquid,” outlines Abdulkadir Yayci. The research group improved the reaction conditions by binding the enzyme to an inert carrier material. This creates a buffer zone above the enzyme in which the highly reactive plasma species can react without harming the enzyme.

The researchers then tested their approach using a second enzyme, the unspecific peroxygenase from the fungus Agrocybe aegerita. This peroxygenase has the ability to oxidise a large number of substrates in a highly selective way. “We successfully demonstrated that this specificity is maintained even under plasma treatment and that highly selective biocatalytic reactions are possible using plasma,” concludes Julia Bandow.

The research was funded by the German Research Foundation (DFG) within the Collaborative Research Centre Transient Atmospheric Plasmas (SFB 1316) and benefited directly from studies of bacterial protection mechanisms in the context of a DFG research grant (BA 4193/7-1).