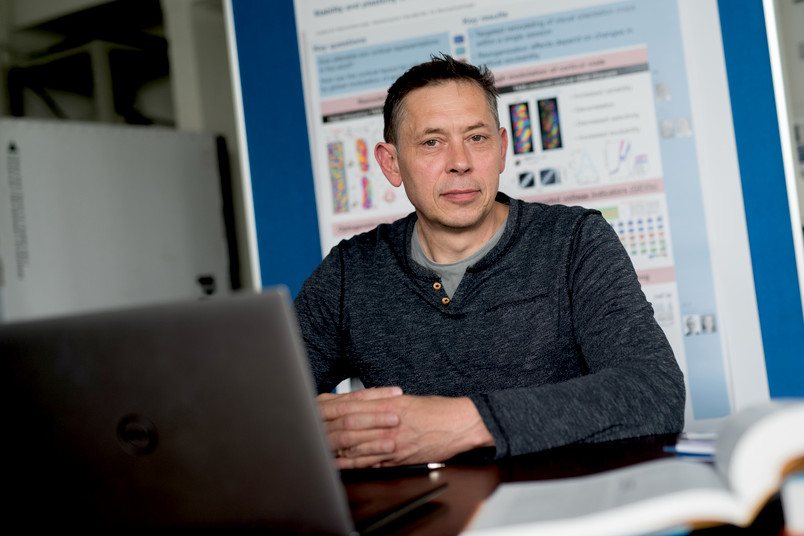 How serotonin balances communication within the brain

Our brain is steadily engaged in soliloquies. These internal communications are usually also bombarded with external sensory events. Hence, the impact of the two neuronal processes need to be permanently fine-tuned to avoid their imbalance. A team of scientists at the Ruhr-Universität Bochum (RUB) revealed the role of the neurotransmitter Serotonin in this scenario. They discovered that distinct serotonergic receptor types control the gain of both streams of information in a separable manner. Their finding may facilitate new concepts of diagnosis and therapy of neuronal disorders related to malfunction of the serotonin system. The study is published online in the open access journal „Elife“ on 7. April 2020.

Impacting on different streams of information in the brain

„The following everyday life example may sketch the task that the brain needs to solve“, explains Dr. Dirk Jancke, Head of the Optical Imaging Group at the Institute of Neural Computation: „Imagine sitting with your family at dinner, a heated debate is going on how to properly organise some internal affairs. Suddenly the phone starts ringing; you are picking up while family discussion goes on. In order to understand the calling party correctly, the crowd in the back must speak lower or the caller needs to speak up. Thus, the loudness of each internal background conversation and external call need to be properly adjusted to ensure non-interfered – that means separable – information transfer.“ As in this anecdote, comparable brain processes involve serotonin.

Serotonin is a neurotransmitter of the central nervous system, in common parlance called „Happy hormone“ because it contributes to changes in brain state and is often associated with effects on mood. The study of the RUB team now demonstrates that serotonin participates also in the scaling of current sensory input and ongoing brain signals.

The RUB neuroscientists discovered the underlying mechanisms in experiments that investigated cortical processing of visual information. For their study, they used genetically modified mice in which the release of serotonin could be controlled by light. This mouse line was developed by the group of Professor Stefan Herlitze, Department of General Zoology and Neurobiology, to enable specific activation of serotonergic neurons by an implanted light fiber.

Combining this technique with optical imaging, the RUB team found that increasing levels of serotonin in the visual brain leads to concurrent suppression of ongoing activity and activity evoked by visual stimuli. Two types of receptors played a distinct major role here. “This was surprising to us, because both receptors are not only co-expressed in specific neurons but also widely distributed across different cell types in the brain”, says Zohre Azimi, first author of the study. Separable action of these receptors allows distinct modulations of information carrying internal brain communication and evoked sensory signals. Low serotonin levels, as they typically occur during sleep at night, favor internal brain communication, and thus, may promote important functions of dreaming. “Dysfunction in the interplay of these receptors, on the other hand, harbor the risk of an overemphasis of either internally or externally driven information channels”, says Jancke. For example, irregular 5-HT receptor distributions caused by genetic predisposition may become manifest in an imbalanced perception of inner and outside world, similar as seen in clinical pictures of depression and autism.

The scientists hope that their findings contribute to a better understanding of how serotonin affects fundamental brain processes. In turn, their study may trigger future research in developing receptor-specific drugs that benefit patients with serotonin-related psychiatric diseases.

The study was partly financed through grants of the Collaborative Research Centre (CRC) 874 at RUB, which is supported by the German Research Foundation since 2010. The CRC “Integration and representation of sensory processes” investigates how sensory signals generate neuronal maps, and result in complex behaviour and memory formation.