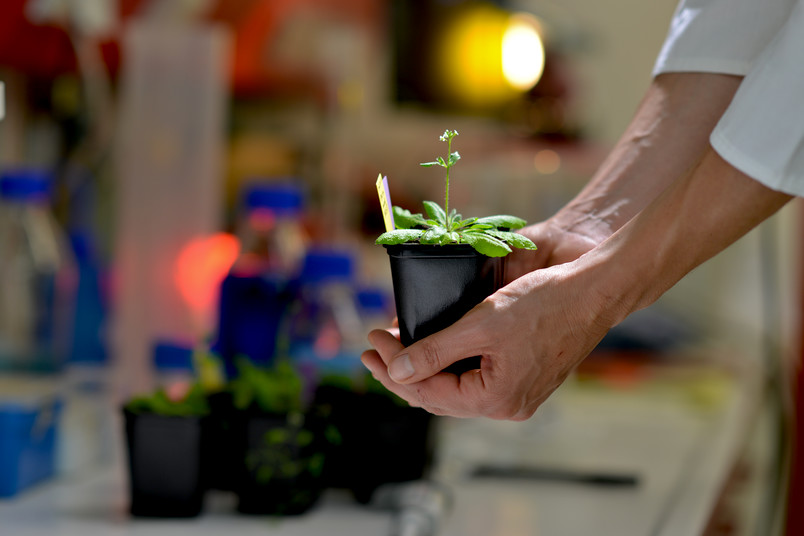 How a defect leads to more efficient growth.

In a way, plants are energy wasters: in order to protect themselves from excessive electron transport, they continuously quench light energy and don’t use it for photosynthesis and biomass production. A mutation can make them work more efficiently, as was discovered by a team from Ruhr-Universität Bochum (RUB) and Martin Luther University Halle-Wittenberg (MLU). To this end, the team identified several thousand proteins, determined their respective amounts in mutant and reference lines and combined the findings with measurements of photosynthetic performance. Their findings were published in the journal Nature Communications on 3 April 2020.

For their joint research, the team headed by Dr. Julia Grimmer from MLU and Professor Sacha Baginsky, Head at the Chair for Plant Biochemistry at RUB, used Arabidopsis thaliana as model organism. “This plant has been studied in detail and there are many known mutations,” explains Julia Grimmer. Two of these mutations were of particular interest to the research group and were pivotal for the discoveries that have now been described.

One of the mutations is characterised by a defect in protein import into the chloroplasts. Chloroplasts are dependent on importing a large proportion of their proteins from the cytoplasm. “A defect in the import prevents the production of sufficient chlorophyll – the plants are not green, they are albino mutants,” explains lead author Julia Grimmer. The other mutation affects the function of the so-called proteasome, a protein complex responsible for degrading proteins in the cytoplasm. In the mutant, the functionality of the proteasome is altered.

“The combination of these two mutations has resulted in a new phenotype of the plant,” explains Sacha Baginsky. “The plants are greener than the albino mutant and they carry out more photosynthesis. This surprised us, because it is contra-intuitive. If a second defect is added to the first, the function improves.” The researchers interpret this result as follows: the reduced degradation of proteins due to the proteasome mutation means that more chloroplast proteins are available in the cytoplasm. Even though transport is disrupted due to the import mutation, some proteins can still be transported into the chloroplasts, where more chlorophyll can thus be formed than in albino plants. The new double mutant also has more thylakoid stacks: this is where the functional photosynthetic complexes are located.

Studies of wild-type Arabidopsis plants showed that the improvement in photosynthetic performance due to the proteasome mutation also occurs independently of the import mutation. “We assume that the proteasome is constantly degrading chloroplast proteins in the cytoplasm, which in turn protects the plant from potential damage caused by too much photosynthesis,” says Sacha Baginsky. This means the plant wastes energy that could be used to build up biomass in order to protect itself. Due to the proteasome mutation, which interferes with the degradation of proteins in the cytoplasm, this limiting factor is reduced and photosynthesis is rendered more efficient. “Since all photosynthetic organisms protect themselves through similar mechanisms, we assume that this effect can also be transferred to higher plants,” reckons the biologist. This could potentially help to render the conversion of carbon dioxide into biomass by plants more efficient.

The research team has based its findings on complex analyses of the entirety of plant proteins, the so-called proteome. Several thousand proteins were both identified and their respective amounts in the different mutants were quantitatively determined. “Only very few research groups are able to do this in this level of detail. This has enabled us to document the effects and to understand them,” concludes Sacha Baginsky.

The research was funded by the German Research Foundation (funding codes BA 1902/3–2 and INST 271/283–1 FUGG) and by the European Regional Development Fund and the state of Saxony-Anhalt (funding code W21004490).