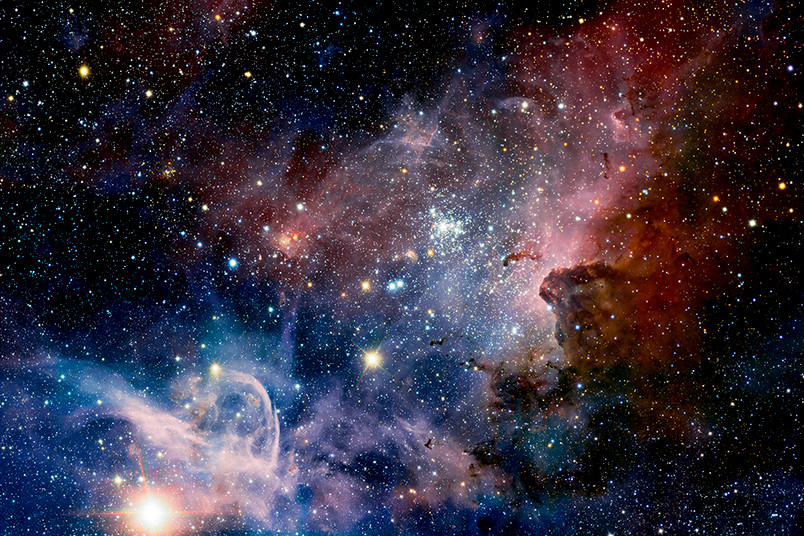 The Universe contains unimaginably many objects. Cosmologists are trying to weigh them all.
© ESO/T. Preibisch
Cosmology

The weight of the Universe

Results from physicists in Bochum have challenged the Standard Model of Cosmology. Infrared data, which have recently been included in the analysis, could be decisive.

Bochum cosmologists headed by Professor Hendrik Hildebrandt have gained new insights into the density and structure of matter in the Universe. Several years ago, Hildebrandt had already been involved in a research consortium that had pointed out discrepancies in the data between different groups. The values determined for matter density and structure differed depending on the measurement method. A new analysis, which included additional infrared data, made the differences stand out even more. They could indicate that this is the flaw in the Standard Model of Cosmology.

Rubin, the science magazine of Ruhr-Universität Bochum, has published a report on Hendrik Hildebrandt’s research. The latest analysis of the research consortium, called Kilo-Degree Survey, was published in the journal Astronomy and Astrophysics in January 2020.

Two methods for determining the structure of matter

Research teams can calculate the density and structure of matter based on the cosmic microwave background, a radiation that was emitted shortly after the Big Bang and can still be measured today. This is the method used by the Planck Research Consortium.

The Kilo-Degree Survey team, as well as several other groups, determined the density and structure of matter using the gravitational lensing effect: as high-mass objects deflect light from galaxies, these galaxies appear in a distorted form in a different location than they actually are when viewed from Earth. Based on these distortions, cosmologists can deduce the mass of the deflecting objects and thus the total mass of the Universe. In order to do so, however, they need to know the distances between the light source, the deflecting object and the observer, among other things. The researchers determine these distances with the help of redshift, which means that the light of distant galaxies arrives on Earth shifted into the red range.

To determine distances, cosmologists therefore take images of galaxies at different wavelengths, for example one in the blue, one in the green and one in the red range; they then determine the brightness of the galaxies in the individual images. Hendrik Hildebrandt and his team also include several images from the infrared range in order to determine the distance more precisely.

Previous analyses had already shown that the microwave background data from the Planck Consortium systematically deviate from the gravitational lensing effect data. Depending on the data set, the deviation was more or less pronounced; it was most pronounced in the Kilo-Degree Survey. “Our data set is the only one based on the gravitational lensing effect and calibrated with additional infrared data,” says Hendrik Hildebrandt, Heisenberg professor and head of the RUB research group Observational Cosmology in Bochum. “This could be the reason for the greater deviation from the Planck data.”

To verify this discrepancy, the group evaluated the data set of another research consortium, the Dark Energy Survey, using a similar calibration. As a result, these values also deviated even more strongly from the Planck values.

Scientists are currently debating whether the discrepancy between the data sets is actually an indication that the Standard Model of Cosmology is wrong or not. The Kilo-Degree Survey team is already working on a new analysis of a more comprehensive data set that could provide further insights. It is expected to provide even more precise data on matter density and structure in spring 2020.