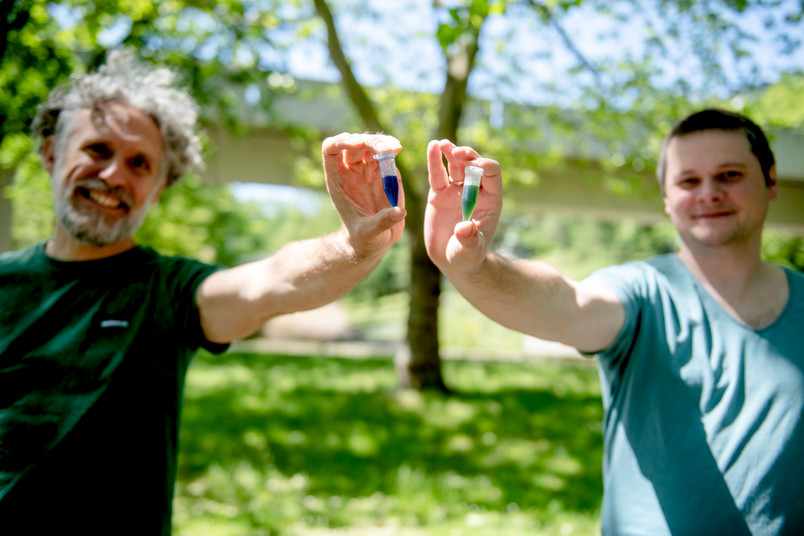 By combining light-collecting and photosynthesis proteins of different types, more energy can be produced.

Potential sources of renewable energy include protein complexes that are responsible for photosynthesis. However, their efficiency in technical applications still leaves much to be desired. For example, they cannot convert green light into energy. A research team from Ruhr-Universität Bochum (RUB) and the Israel Institute of Technology in Haifa has successfully closed this so-called green gap by combining a photosynthesis protein complex with a light-collecting protein from cyanobacteria. The team pre-published their report online in the Journal of Materials Chemistry A on 11 May 2020.

Biosolar cells are an innovative concept for converting sunlight into electrical energy. They are manufactured using biological components from nature. At their core are so-called photosystems: large protein complexes that are responsible for energy conversion in plants, algae and cyanobacteria. Photosystem II, PSII for short, plays a central role in the process, because it can use water as an electron source for the generation of electricity.

Cooperation so far unsuccessful in the test tube

“However, as unique as PSII is, its efficiency is limited, because it can use merely a percentage of the sunlight,” explains Professor Marc Nowaczyk, Head of the Molecular Mechanisms of Photosynthesis project group at RUB. When it comes to the so-called green gap in particular, PSII is almost inactive. “Cyanobacteria have solved the problem by forming special light-collecting proteins, i.e. phycobilisomes, which also make use of this light. This cooperation works in nature, but not yet in the test tube.”

Super complexes use twice as many photons of the green gap

The researchers stabilised these super complexes using short-chain chemical crosslinkers that permanently fix the proteins at a very short distance from each other. In the next step, they inserted them into appropriate electrode structures. “We mastered this challenge by using customised, three-dimensional and transparent electrodes in combination with redox-active hydrogels,” says Dr. Volker Hartmann, lead author of the study. This design enabled the researchers to use twice as many photons within the green gap, compared to a system without any light collection complexes.

The assembly of protein complexes in the test tube is considered a promising interim stage in the development of biological solar cells. The advantages of different species can thus be functionally combined in semi-artificial systems. In future, the researchers will be mainly focusing on optimising the production and life span of the biological components.

The research was funded by the Ruhr Explores Solvation Resolv Cluster of Excellence, the GRK 2341 Microbial Substrate Conversion Research School (Micon), which are financed by the German Research Foundation (DFG), and the German-Israeli research project Nano-engineered opto-bioelectronics with biomaterials and bio-inspired assemblies under the auspices of the DFG and the Israel Science Foundation.