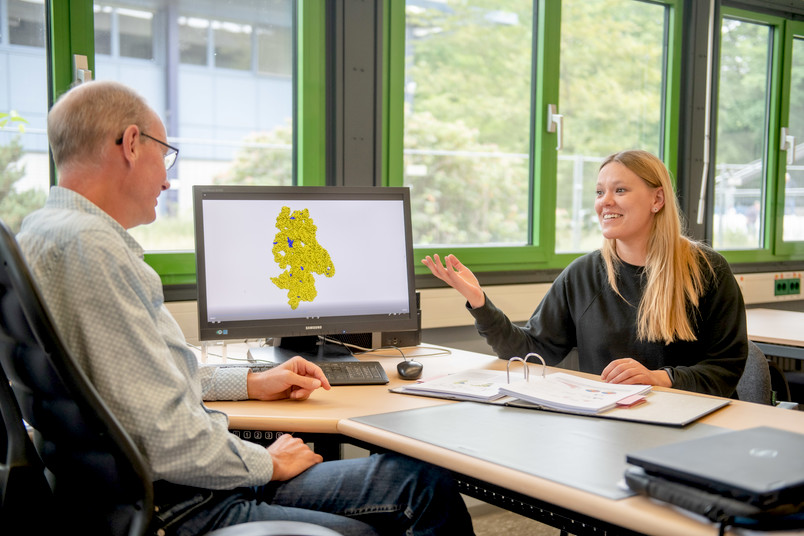 RNA structures by the thousands

Every cell contains thousands of different RNA molecules. In the past, it would have taken many research careers to decipher their structures using traditional methods. But not anymore.

Researchers from Bochum and Münster have developed a new method to determine the structures of all RNA molecules in a bacterial cell at once. In the past, this had to be done individually for each molecule. Besides their exact composition, their structure is crucial for the function of the RNAs. The team describes the new high-throughput structure mapping method, termed Lead-Seq for lead sequencing, in the journal Nucleic Acids Research, published online on 28 May 2020.

Christian Twittenhoff, Vivian Brandenburg, Francesco Righetti and Professor Franz Narberhaus from the Chair of Microbial Biology at Ruhr-Universität Bochum (RUB) collaborated with the bioinformatics group headed by Professor Axel Mosig at RUB and the team led by Professor Petra Dersch at the University of Münster, previously from the Helmholtz Centre for Infection Research in Braunschweig.

No structure – no function

In all living cells, genetic information is stored in double-stranded DNA and transcribed into single-stranded RNA, which then serves as a blueprint for proteins. However, RNA is not only a linear copy of the genetic information, but often folds into complex structures. The combination of single-stranded and partially folded double-stranded regions is of central importance for the function and stability of RNAs. “If we want to learn something about RNAs, we must also understand their structure,” says Franz Narberhaus.

With lead sequencing, the authors present a method that facilitates the simultaneous analysis of all RNA structures in a bacterial cell. In the process, the researchers take advantage of the fact that lead ions cause strand breaks in single-stranded RNA segments; folded RNA structures, i.e. double strands, remain untouched by lead ions.

By applying lead, the researchers split the single-stranded RNA regions at random locations into smaller fragments, then transcribed them into DNA and sequenced them. The beginning of each DNA sequence thus corresponded to a former strand break in the RNA. “This tells us that the corresponding RNA regions were present as a single strand,” explains Narberhaus.

Vivian Brandenburg and Axel Mosig then used bioinformatics to evaluate the information on the single-stranded RNA sections obtained in the experiments. “We assumed that non-cut RNA regions were present as double strands and used prediction programs to calculate how the RNA molecules must be folded,” elaborates Vivian Brandenburg. “This resulted in more reliable structures with the information from lead sequencing than without this information.”

This approach enabled the researchers to simultaneously determine the structures of thousands of RNAs of the bacterium Yersinia pseudotuberculosis all at once. The team compared the results obtained by lead sequencing of some RNA structures with results obtained using traditional methods – they were both the same.

The group carried out their experiments at 25 and 37 degrees Celsius, since some RNA structures change depending on the temperature. Using what is known as RNA thermometers, bacteria such as the diarrhoea pathogen Yersinia pseudotuberculosis can detect whether they are inside the host. Using lead sequencing, the team not only identified already known RNA thermometers, but also discovered several new ones.

Establishing lead sequencing took about five years. “I’m happy to say that we are now able to map numerous RNA molecules in a bacterium simultaneously,” concludes Franz Narberhaus. “One advantage of the method is that the small lead ions can easily enter living bacterial cells. We therefore assume that this method can be used universally and will in future facilitate the detailed structure-function analysis of bacterial RNAs.”

The German Research Foundation funded the study under the umbrella of project no. DFG NA 240/10-2.