New insights into the energy levels in quantum dots

Researchers have experimentally proven the theoretically predicted Auger effect in quantum dots. The findings help to understand the structures that form the basis of quantum communication.

Researchers from Basel, Bochum and Copenhagen have gained new insights into the energy states of quantum dots. They are semiconductor nanostructures and promising building blocks for quantum communication. With their experiments, the scientists confirmed certain energy transitions in quantum dots that had previously only been predicted theoretically: the so-called radiative Auger process. For their investigations, the researchers in Basel and Copenhagen used special samples that the team from the Chair of Applied Solid State Physics at Ruhr-Universität Bochum had produced. The researchers report their results in the journal Nature Nanotechnology, published online on 15 June 2020.

In order to create a quantum dot, the Bochum researchers use self-organizing processes in crystal growth. In the process, they produce billions of nanometer-sized crystals of, for example, indium arsenide. In these they can trap charge carriers, such as a single electron. This construct is interesting for quantum communication because information can be encoded with the help of charge carrier spins. For this coding, it is necessary to be able to manipulate and read the spin from the outside. During readout, quantum information can be imprinted into the polarization of a photon, for example. This then carries the information further at the speed of light and can be used for quantum information transfer.

This is why scientists are interested, for example, in what exactly happens in the quantum dot when energy is irradiated from outside onto the artificial atom.

Atoms consist of a positively charged core which is surrounded by one or more negatively charged electrons. When one electron in the atom has a high energy, it can reduce its energy by two well-known processes: in the first process the energy is released in the form of a single quantum of light (a photon) and the other electrons are unaffected. A second possibility is an Auger process, where the high energy electron gives all its energy to other electrons in the atom. This effect was discovered in 1922 by Lise Meitner and Pierre Victor Auger. 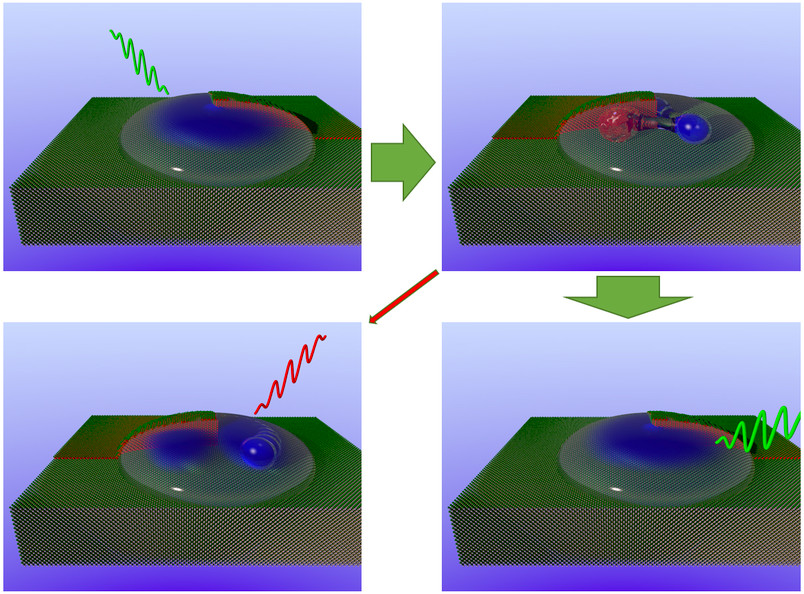 An electron inside a quantum dot is raised by a photon (green waveform) to a higher energy level. The result is a so-called exciton, an excited state consisting of two electrons and one hole. By emitting a photon (green waveform), the system returns to the ground state (green path). In rare cases, a radiative Auger process takes place (red arrow): an electron stays in the excited state, while a photon of lower energy (red waveform) is emitted.
© RUB, Arne Ludwig

Using the radiative Auger effect, scientists can also precisely determine the structure of the quantum mechanical energy levels available to a single electron in the quantum dot. Until now, this was only possible indirectly via calculations in combination with optical methods. Now a direct proof has been achieved. This helps to better understand the quantum mechanical system.

In order to find ideal quantum dots for different applications, questions such as the following have to be answered: how much time does an electron remain in the energetically excited state? What energy levels form a quantum dot? And how can this be influenced by means of manufacturing processes?

The group observed the effect not only in quantum dots in indium arsenide semiconductors. The Bochum team of Dr. Julian Ritzmann, Dr. Arne Ludwig and Professor Andreas Wieck also succeeded in producing a quantum dot from the semiconductor gallium arsenide. In both material systems, the team from Bochum has achieved very stable surroundings of the quantum dot, which has been decisive for the radiative Auger process. For many years now, the group at Ruhr-Universität Bochum has been working on the optimal conditions for stable quantum dots.

The project was funded by the National Centre of Competence in Research „Quantum Science and Technology“, the Swiss National Science Foundation (grant no. 200020 156637), the European Union within the Horizon 2020 program (grant no. 721394 and 840453), the German Research Foundation (Collaborative Research Centre TRR160, project DFH/UFA CDFA05-06 and project 383065199), the German Federal Ministry of Education and Research (project Q.Link.X/grant no. 16KIS0867), the Danish Center of Excellence Hy-Q, (grant no. DNRF139) as well as the European Research Council (ERC Advanced Grants „Scale“).