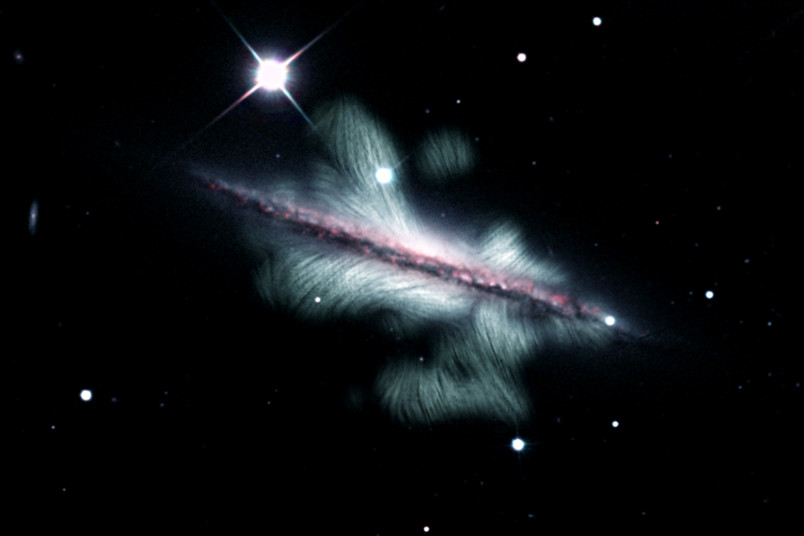 The spiral galaxy NGC 4217 has a huge magnetic field that is shown here as green lines. The data for this visualisation were recorded with the radio telescope Karl G. Jansky Very Large Array (VLA) of the National Science Foundation. The image of the galaxy shown from the side is taken from data from the Sloan Digital Sky Survey and Kitt Peak National Observatory.
© please see information box below
Astronomy

Superbubbles, giant loops and X-shaped magnetic field structures – this galaxy boasts a veritable wealth of shapes. How such structures are formed is a mystery. A new study provides some clues.

Spiral galaxies such as our Milky Way can have sprawling magnetic fields. There are various theories about their formation, but so far the process is not well understood. An international research team has now analysed the magnetic field of the Milky Way-like galaxy NGC 4217 in detail on the basis of radio astronomical observations and has discovered as yet unknown magnetic field structures. The data suggest that star formation and star explosions, so-called supernovae, are responsible for the visible structures.

The team led by Dr. Yelena Stein from Ruhr-Universität Bochum, the Centre de Données astronomiques de Strasbourg and the Max Planck Institute for Radio Astronomy in Bonn together with US-American and Canadian colleagues, published their report in the journal Astronomy and Astrophysics, released online on 21 July 2020.

The analysed data had been compiled in the project “Continuum Halos in Nearby Galaxies”, where radio waves were utilised to measure 35 galaxies. “Galaxy NGC 4217 is of particular interest to us,” explains Yelena Stein, who began the study at the Chair of Astronomy at Ruhr-Universität Bochum under Professor Ralf-Jürgen Dettmar and who currently works at the Centre de Données astronomiques de Strasbourg. NGC 4217 is similar to the Milky Way and is only about 67 million light years away, which means relatively close to it, in the Ursa Major constellation. The researchers therefore hope to successfully transfer some of their findings to our home galaxy.

When evaluating the data from NGC 4217, the researchers found several remarkable structures. The galaxy has an X-shaped magnetic field structure, which has also been observed in other galaxies, extending far outwards from the galaxy disk, namely over 20,000 light years.

In addition to the X-shape, the team found a helix structure and two large bubble structures, also called superbubbles. The latter originate from places where many massive stars explode as supernovae, but also where stars are formed that emit stellar winds in the process. Researchers therefore suspect a connection between these phenomena.

“It is fascinating that we discover unexpected phenomena in every galaxy whenever we use radio polarisation measurements,” points out Dr. Rainer Beck from the MPI for Radio Astronomy in Bonn, one of the authors of the study. “Here in NGC 4217, it is huge magnetic gas bubbles and a helix magnetic field that spirals upwards into the galaxy’s halo.”

The analysis moreover revealed large loop structures in the magnetic fields along the entire galaxy. “This has never been observed before,” explains Yelena Stein. “We suspect that the structures are caused by star formation, because at these points matter is ejected outward.”

For their analysis, the researchers combined different methods that enabled them to visualise the ordered and chaotic magnetic fields of the galaxy both along the line of sight and perpendicular to it. The result was a comprehensive image of the structures.

To optimise the results, Yelena Stein combined the data evaluated by means of radio astronomy with an image of NGC 4217 that was taken in the visible light range. The image is available for download on the website public.nrao.edu. “Visualising the data was important to me,” stresses Stein. “Because when you think about galaxies, magnetic fields is not the first thing that comes to mind, although they can be gigantic and display unique structures. The image is supposed to shift the magnetic fields more into focus.”

Composite image by Yelena Stein of the Centre de Données astronomiques de Strasbourg (CDS) with the support of Jayanne English (University of Manitoba). VLA radio data from Yelena Stein and Ralf-Jürgen Dettmar (Ruhr University Bochum). The observations are part of the project Continuum Halos in Nearby Galaxies – an EVLA Survey (CHANG-ES) led by Judith Irwin (Queen’s University, Canada). The optical data are from the Sloan Digital Sky Survey (www.sdss.org). The ionised hydrogen data (red) are from the 0.9m telescope of the Kitt Peak National Observatory, collected by Richard J. Rand of the University of New Mexico. The software code for tracing the magnetic field lines was adapted from the Linear Integral Convolution code provided by Arpad Miskolczi of Ruhr University.