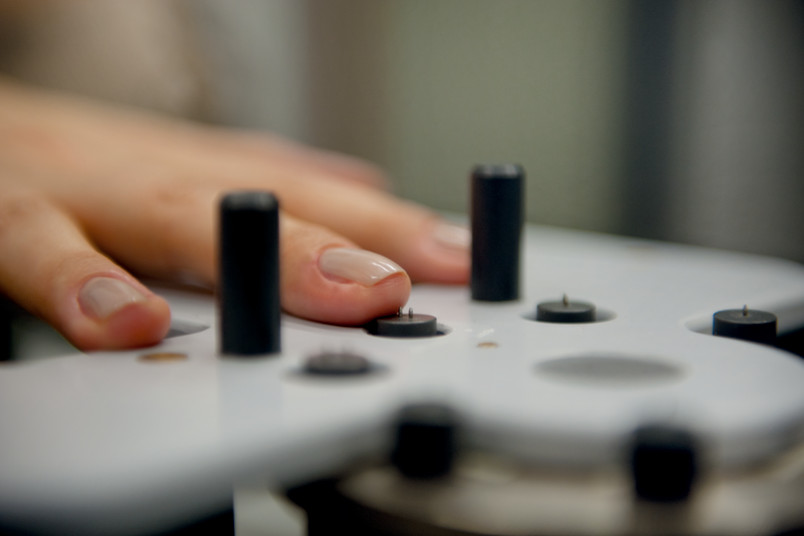 The sense of touch can be improved by appropriate stimulation training – here, for example, by being able to differentiate between needlepoints that are closely spaced.
© RUB, Nelle
Neuroscience

Tactile stimulation repeatedly administered over a sustained period of time changes neuronal processing in the hand area of the brain.

Stimulating the fingertip rhythmically for a sustained period of time, markedly improves touch sensitivity of this finger. A research team led by Associate Professor Dr. Hubert Dinse at Ruhr-Universität Bochum (RUB) analysed the impact of this process in the brain. Using electroencephalography (EEG), the scientists recorded neuronal activity of brain areas associated with tactile processing. They were able to observe changes in activity over time – possibly illustrating a learning process. The team reported their findings in Frontiers in Human Neuroscience on 30 June 2020.

In daily life, people learn through practice and repetition, which is possible by a brain process called neuronal plasticity. A prominent example of a cellular basis for such plasticity processes is called long-term potentiation, the ability of neurons to increase communication efficiency with other neurons they are connected to.

In analogy to the rhythmic neuronal activity underlying long-term potentiation, the RUB team has developed a method of stimulation-based learning. Thereby senses, such as the sense of sight or touch, are rhythmically stimulated. A well-studied example of this is electrical stimulation of the fingertips, which – if administered at the correct frequency – has been shown to increase tactile sensitivity in the stimulated fingertip. Studies show that this fingertip stimulation leads to significant plasticity processes in the somatosensory cortex. However, it has not yet been proven whether long-term potentiation is the foundation of these processes.

The RUB neuroscientists have studied stimulation-based learning in volunteers with EEG recordings. Their goal was to assess neuronal activity as well as its development during this learning process. As such, they carried out two experiments with two groups of subjects. The first experiment served as a control study to confirm that the method of air stimulation administered through an inflatable membrane used in this experiment has the same positive effect on touch sensitivity as the established method of electrical stimulation. The electrical version could not be used in this case, as it distorts the signal of EEG recordings with electrical artefacts.

In the second experiment, volunteers received the aforementioned painless air-stimulation on their fingertip for 40 minutes. At the same time, the activity in the somatosensory cortex of the test subjects was measured with EEG. The scientists concentrated on the area of​​ ​​the brain associated with sensory processing of the hand.

“Using electroencephalic measurements of brain activity, we were able to show that large cell ensembles adapt their activity to the frequency of the stimulation during the active stimulation phases. This reaction remains stable over 20 minutes, without any signs of habituation, which is very similar to cellular long-term potentiation,” explains Dr. Marion Brickwedde, first author of the study.

Furthermore, the scientists were also able to observe how neuronal responses to the stimulation changed over time. They found that the shape of event-related potentials, which represent stimulus processing in the brain, was changing. The event-related desynchronization of the alpha rhythm, a typical response to tactile stimuli, was also reduced after 20 minutes.

“These processes may represent excitability changes in tactile brain areas, that is, a directly observable learning process. It is not yet possible to draw the definite conclusion that the here-applied finger stimulation actually triggers long-term potentiation in the human sensorimotor cortex. But taking into account previous findings which show, for example, the dependence of both processes on the same neuronal receptor type, the accumulating evidence speaks volumes”, explains Marion Brickwedde.

The research was supported by the Deutsche Forschungsgemeinschaft within Sonderforschungsbereich 874 and the International Graduate School of Neuroscience.