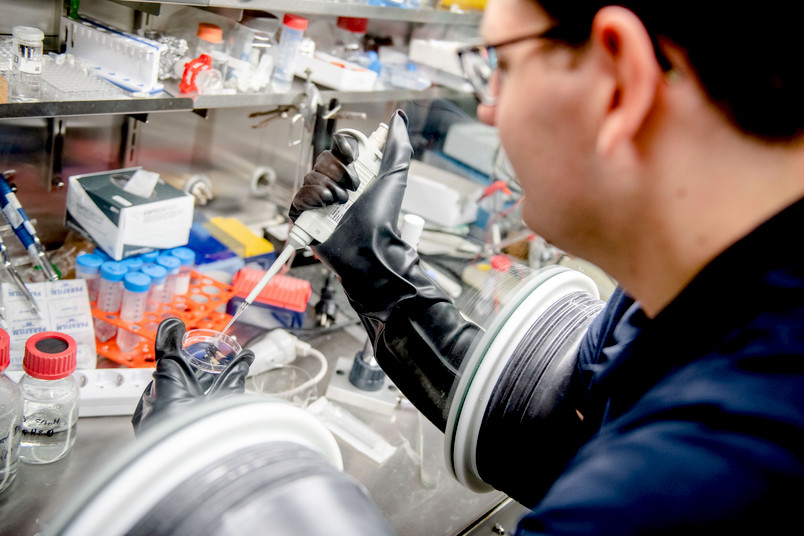 Together with their research partners, the team at the Center for Electrochemistry is working on the development of new catalysts.
© RUB, Marquard
Electrochemistry

Bacterial enzymes are often powerful but also very sensitive catalysts. To call up their performance, they therefore need a special environment.

Researchers at Ruhr-Universität Bochum (RUB) have developed new techniques for efficiently coupling bacterial enzymes to electrodes. Together with a team from the University of Utah, they realised a system for ammonia synthesis based on a nitrogenase enzyme. They also designed a hydrogen/oxygen biofuel cell based on a hydrogenase enzyme together with a team from the Max Planck Institute for Chemical Energy Conversion. Both papers have been published in the journal “Angewandte Chemie” in May and June 2020.

Many enzymes that occur in nature are powerful catalysts, such as the so-called [FeFe]-hydrogenases. Hydrogenases are used by bacteria to produce hydrogen, while nitrogenases succeed in activating the strongest bond in nature in nitrogen (N2). Both enzymes are highly sensitive to oxygen, but use readily available non-precious metals in their active centres. Thus they could one day replace expensive precious metal catalysts. “To use such highly sensitive catalysts for biofuel cells is still one of the biggest challenges in sustainable energy conversion,” says Professor Wolfgang Schuhmann, head of the RUB Centre for Electrochemistry and member of the cluster of excellence “Ruhr Explores Solvation”, Resolv.

In cooperation with the team of Professor Wolfgang Lubitz from the Max Planck Institute for Chemical Energy Conversion in Mülheim an der Ruhr, the Bochum group showed under which circumstances this is nevertheless possible. They used a so-called [FeFe] hydrogenase from the bacterium Desulfovibrio desulfuricans. Although this is a very efficient catalyst, it must be protected in the fuel cell from the oxygen required for operation at the second electrode.

In this work, the scientists integrated the [FeFe]-hydrogenase for the first time into a biofuel cell operated with so-called gas diffusion electrodes. In this cell, hydrogen and oxygen are transported to the enzymes through a membrane. The team embedded the enzyme in a matrix consisting of a so-called redox polymer, which fixes the enzyme to the gas-permeable electrode surface, protects the enzyme from the harmful effects of oxygen and also establishes electrical contact between the enzyme and the electrode. With this design, the fuel cell achieved previously unattained high current densities of 14 milliamperes per square centimetre and high power densities of 5.4 milliwatts per square centimetre.

In the second project, the research team at RUB, together with the US group led by Professor Shelley Minteer from the University of Salt-Lake City, looked for a bioelectrosynthetic alternative for ammonia synthesis. In the chemical industry, ammonia is commonly produced using the Haber-Bosch process at high temperature and high pressure and with a considerable release of CO2.

Some bacteria possess enzymes, called nitrogenases, with which they fix molecular nitrogen (N2) and can metabolise it at room temperature and without increased pressure. However, in living organisms this consumes a lot of energy in the form of the energy storage molecules ATP.

The research team showed that it is possible to couple the nitrogenase from the bacterium Azotobacter vinelandii with an electrode through which the necessary electrons for the reaction can be supplied, so that no ATP is required. Once again, the key to success was a redox polymer that helped to establish a stable and efficient electrical contact between the electrode and the nitrogenase/redox polymer composite. “To our knowledge, the fixation and contacting of nitrogenases in redox polymers is the first step in making nitrogenases applicable for bioelectrosynthesis,” write the authors of the study.

The work with the hydrogenase was financially supported by the German Research Foundation within the framework of the Cluster of Excellence Resolv (EXC 2033, project number 390677874) and within the priority program “Iron-Sulfur for Life” (SPP 1927, project BI 2198/1-1). Further support came from the Max Planck Society.

The work with the nitrogenase was supported by the US Department of Energy (DE-SC0017845), by Fulcrum Biosciences, by the German Research Foundation within the Cluster of Excellence Resolv (EXC 2033, project number 390677874), by the European Research Council and within the framework of the European Union’s Horizon 2020 research and innovation programme (CasCat, funding number 833408).