People with increased risk of Alzheimer’s have deficits in navigating

To unmask their impairments, researchers had to come up with a unique experimental design.

Alzheimer’s patients develop severe symptoms of spatial disorientation as the disease progresses and are unable to find even the simplest ways. An international research team headed by Anne Bierbrauer, Dr. Lukas Kunz, Dr. Carlos Gomez and Professor Nikolai Axmacher from Ruhr-Universität Bochum and Universitätsklinikum Freiburg now reports that problems in spatial navigation can also be detected in people with a genetic risk for Alzheimer’s. Their article was published in the journal Science Advances, released online on 28 August 2020. The team from Bochum, Freiburg, Dortmund, Sevilla, Madrid, Parma and Brussels explored the ability of path integration.

Animals and humans have the ability to follow their own position in space through self-motion cues, even in the absence of any other sensory information. “If you get up at night and want to find your way to the bathroom in the dark, you need – in addition to knowing the arrangement of your own home – a mechanism that tracks your own position in the room without using external cues,” illustrates Anne Bierbrauer. This ability is known as path integration.

Researchers assume that the activity of so-called grid cells in the entorhinal cortex is responsible for this ability. When navigating a spatial environment, these cells display a unique, regular activity pattern. It has long been known that the entorhinal cortex is crucial for spatial navigation. It is also one of the first regions of the brain affected by Alzheimer’s disease.

In a previous study, the researchers had shown that grid cells exhibit altered functioning in people at genetic risk for developing Alzheimer’s disease. However, the test persons did not show any obvious navigation problems. “We assume that they used compensatory mechanisms to find their way,” explains Nikolai Axmacher, “presumably via external cues in their surroundings. In Bochum, for example, the winding tower of the Bergbau-Museum can be seen in many places, as it is often visible over the rooftops of other buildings.”

In the current study, the team therefore used a computerized navigation task in which the participants couldn’t use external landmarks to find their way. The researchers compared the navigation performance of 202 volunteers without genetic Alzheimer’s risk and 65 volunteers with increased genetic risk. The latter had a specific expression of the gene for apolipoprotein E, the APOE-ε4 allele. 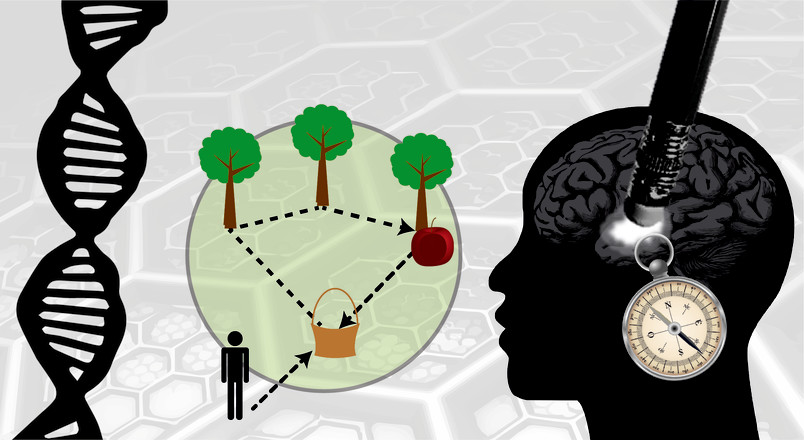 Path integration in a computer experiment: in the Apple Game, participants start at an empty basket and search for a tree with an apple. Once they have found it, they need to remember their starting location and bring the apple to the basket.
© RUB, Anne Bierbrauer

Participants with a genetic risk of Alzheimer’s disease didn’t perform as well as the control group.

An additional group of test persons performed the same task while the researchers recorded their brain activity with functional magnetic resonance imaging. The objective of this experiment was to find out which brain processes play a role in path integration. The team found grid cell representations in the entorhinal cortex to be specifically associated with navigation without external cues, which highlights the role of this brain region for path integration.

“In this study, we demonstrated a very specific deficit in healthy people with a genetically increased risk for Alzheimer’s,” concludes Lukas Kunz. “In the future, such behavioural changes might perhaps help diagnose Alzheimer’s disease earlier, before any serious symptoms appear.” Researchers believe that drug therapies for Alzheimer’s disease have so far failed, because the diagnosis is made too late.

The study was funded by the Federal Ministry of Education and Research (funding code 01GQ1705A), the National Institutes of Health (NIH, grant 563386), the National Science Foundation (grant BCS-1724243), the NIH in collaboration with the National Institute of Neurological Disorders and Stroke (grant U01 NS1113198-01), the German Research Foundation  (EXC 1086, SFB 874, SFB 1280), the Emma and Ernesto Rulfo Foundation for Medical Genetics, the Spanish Ministry of Economy and Competitiveness (funding codes SAF2017-85310-R and PSI2017-85311-P), the Regional Ministry of Innovation, Science and Enterprise, Junta de Andalucia (P12-CTS-2327 to JLC), the International Center on Aging (0348_CIE_6_E) and Ciberned.