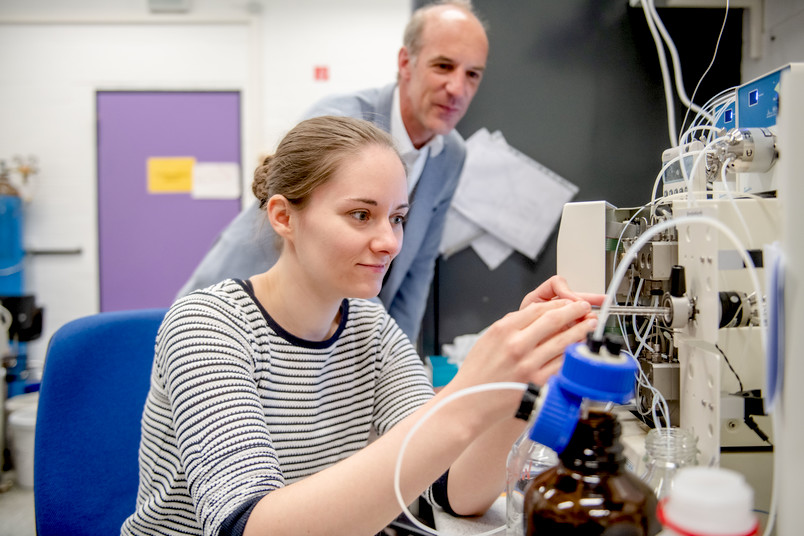 Therapy and diagnostics of tumours in only one step is possible with the aid of so-called theranostic agents. A concept for a new one has been implemented at RUB.

The combination of a biomolecule and a metal complex can target, bind, mark and damage cancer cells. A German-Spanish team has manufactured such a theranostic agent that visualises tumour cells by irradiation with visible light, and proved its effectiveness against lung cancer cells. Andres Luengo from the research group led by Professor M. Concepción Gimeno based at the University of Zaragoza (Spain) carried out part of the work during a research stay in the group headed by Professor Nils Metzler-Nolte at Ruhr-Universität Bochum (RUB). The international research team published its report in the coverstory of the journal Chemistry – A European Journal from 31. August 2020.

Visualisation and treatment in one step

Theranostics, the combination of “therapy” and “diagnostics”, refers to drugs that are used not only to treat tumours but also to render them visible. The principle is as simple as it is ingenious: for example, in prostate cancer treatment, a prostate-specific antibody is radioactively labelled. Once the antibody has bound the prostate cancer cells, the radioactivity emitted by the theranostic agent is used to visualise the tumour and possible metastases, and at the same time it also has a damaging effect on the cancer cells at the target site.

During his research stay at RUB, Andres Luengo took advantage of the experience of the Bioinorganic Chemistry group regarding the production of small biomolecules and metal building blocks that have a toxic effect on cancer cells. He combined a small biomolecule called enkephalin, which can dock to opioid receptors that are abundant in some cancers, with a luminescent and a toxic metal building block. He thus succeeded in producing a molecule that has the same properties as other advanced theranostic agents, but which can be detected by irradiation with visible light rather than radioactivity.

Gimeno’s research team used the molecule’s luminescent properties to detect it within cells and demonstrated its toxic effect at the same time, thus paving the way for further research into this promising and innovative theranostic system.

Following the analysis of the new compound, the researchers found that only one of three slightly different compounds had an active effect against cancer cells. In addition, it turned out that the compound moved to an unexpected location in the cancer cells where the team had not expected to find it. The damaging effect on tumour cells depended on the stability of the bond between the biomolecule, a peptide, and the cell-damaging metal complex: the cell-damaging complex can reach its cellular target structure and attack the cells only if that bond is less stable and can therefore break up.