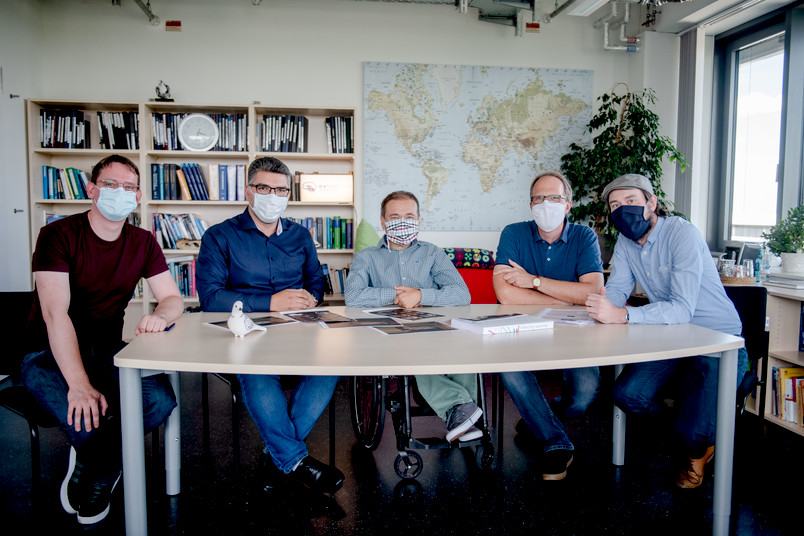 How researchers look at the bird brain in action

For the first time, a research team examined pigeon brains using functional magnetic resonance imaging while the birds were actively involved in a discrimination task.

How do birds make decisions and which brain regions are particularly active when they solve tasks? Researchers from the Department of Biopsychology at Ruhr-Universität Bochum (RUB) are investigating these questions. So far, only anesthetized birds and therefore passive experiments could be examined using the functional magnetic resonance imaging (fMRI). Thus, the examination of brain processes during active tasks was not possible. Now the cognitive neuroscientists at the Biopsychology lab have constructed an experimental set-up which allows them to carry out fMRI examinations on awake pigeons and thus also investigate cognitive processes for the first time. They published their results online in the journal “Nature Communications” on 18 September 2020.

Opening and closing the beak

Within the new experimental setup, the animals can be presented with tasks that they actively work on. During this time, fMRI recordings are continuously made so that the activity of the brain areas that are active during task processing is recorded. In contrast to fMRI examinations in humans, in which the participants can respond to tasks by pressing buttons, the pigeons respond by opening and closing their beak, which is registered by a sensor below the beak.

The researchers checked the quality of the gained fMRI images in a test study. The pigeons had to learn to differentiate between two colours. The animals learned to react to the appearance of the correct colour by opening their beak and received a reward for correct answers. “This study was just a test run to show whether the scan in awake behaving birds works as we had expected,” explains Mehdi Behroozi, the first author of the study.

The way is open for more complex investigations

“The fMRI data of the test study showed that even with this simple discrimination task, a whole network of areas in the pigeon’s brain is active, which could not yet be represented in its entirety,” says Onur Güntürkün, Professor of Biopsychology at RUB about the results of the test study. “Now the way is open for investigations with more complex cognitive tasks. Especially at a time when we are amazed to find out more and more how intelligent birds are, this breakthrough will help to identify the brain basis of these abilities,” adds Güntürkün.

In functional magnetic resonance tomography, slice images of the brain are generated using a strong magnet. They show how well individual parts of the brain are supplied with oxygen. Brain areas that are very active have a lower oxygen saturation than less active areas. Therefore one can for instance see which areas of the brain are particularly challenged when solving a task.

The German Research Foundation supported the work as part of the Collaborative Research Centers 874 and 1280.