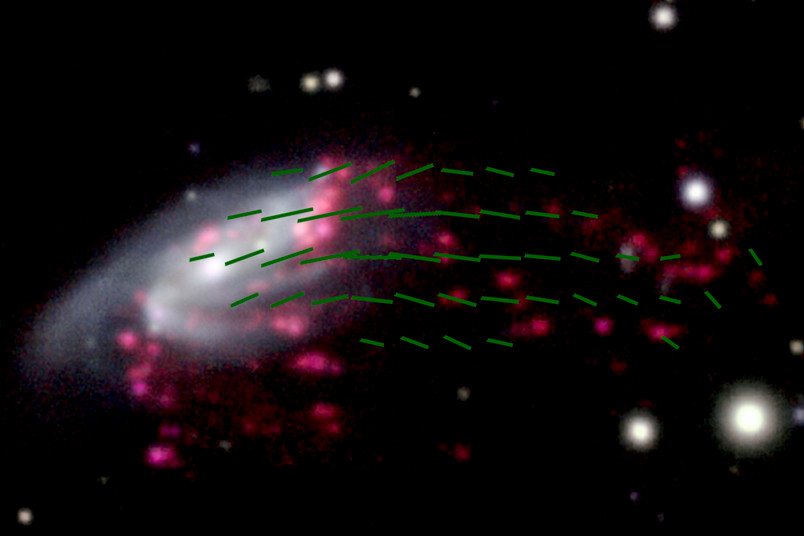 The magnetic fields of the jellyfish galaxy JO206

Their jellyfish-like appearance gives this special class of galaxies their name. Much about what happens in their gas tail hasn’t yet been fully understood. A German-Italian team has gained new insights.

An international team of astronomers has gained new insights into the physical conditions prevailing in the gas tail of so-called jellyfish galaxies. They are particularly interested in the parameters that lead to the formation of new stars in the tail outside the galaxy disk. They analysed, for example, the strength and orientation of the magnetic fields in the galaxy JO206.

Ancla Müller and Professor Ralf-Jürgen Dettmar from Ruhr-Universität Bochum describe their findings together with Professor Christoph Pfrommer and Dr. Martin Sparre from the Leibniz Institute for Astrophysics in Potsdam as well as colleagues from the INAF – Italian national institute of Astrophysics in Padua, Selargius and Bologna in the journal Nature Astronomy from 26 October 2020.

Jellyfish galaxies are galaxies that fall into the centre of a galaxy cluster, so that the motion pushes the interstellar gas in the opposite direction. This results in the formation of a tail, which gives these galaxies their jellyfish-like appearance and hence their name. A team led by Bianca Poggianti, one of the authors of the current paper from the INAF, had shown in earlier studies that stars can form in the gas tails of jellyfish galaxies. The fact that magnetic fields in galaxies can contribute to star formation is well known. However, it has not yet been established whether this is also the case in the rarified gas of jellyfish tails, which are difficult to study due to their low brightness.

The team headed by Ancla Müller has now taken a first step towards resolving this issue. The researchers analysed the magnetic field structure of the galaxy JO206. They have shown that not only the galaxy disk has a strong magnetic field, but also the gas tail. “Considering the unusually high proportion of polarised radiation, we can conclude that the field is aligned very precisely along the tail,” explains Ancla Müller.

Using computer simulations, the group constructed a scenario that can explain the unusual parameters: “While the jellyfish galaxy flies through the galaxy cluster, its magnetic field wraps around the galaxy like a mantle and is further amplified and smoothed by the high galaxy speed and cooling effects,” explains Christoph Pfrommer. This process could amplify the magnetic field of JO206 and also generate the high proportion of polarised radiation.

On the basis of the simulation, the researchers developed the following theory: JO206 falls at high speed into the centre of the galaxy cluster, so that the magnetic fields interact and hot winds from the medium between the galaxies lead to accumulations of plasma. A percentage of the plasma condense on the outer layers of the gas tail, where it mixes with the remaining matter. “This would provide enough material for star formation,” says Ancla Müller. “It should be fascinating to see whether this picture can be confirmed by further measurements on other objects.”

“To verify the hypotheses suggested by the observations of the jellyfish galaxy JO206 we are observing other galaxies with similar tails using radio telescopes in Australia, South Africa and the United States,” concludes Poggianti. “The observation of the magnetic field of JO206 is the first and so far the only investigation of its kind in a jellyfish galaxy. We need more observations to understand if the discovered phenomenon is common or exceptional. This will also allow us to understand what connection exists between the magnetic field and the star formation outside the galaxy disks.”