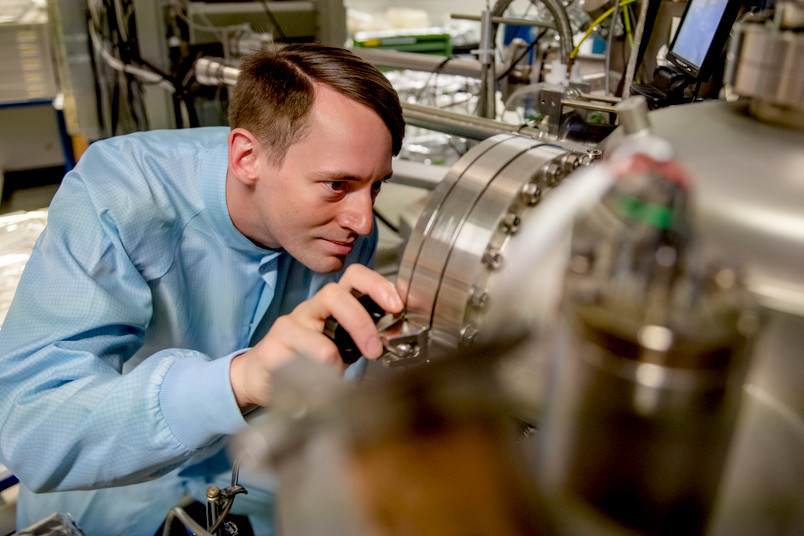 Researchers from Basel and Bochum have realised a key element of quantum communication at the edge of the visible spectrum. So far, that was only possible in the near-infrared range.

Researchers at the University of Basel and Ruhr-Universität Bochum have realised quantum dots – tiny semiconductor nanostructures – that emit light close to the red part of the spectrum with ultra-low background noise. Quantum dots might one day constitute the basis for quantum computers; the light particles, also called photons, would then serve as information carriers. Quantum dots with adequate optical properties had previously only been obtained for photons with wavelengths in the near-infrared range. Now, the researchers have succeeded in creating low-noise states at wavelengths between 700 and 800 nanometres, i.e. close to the visible red range. This would, for example, enable coupling to other photonic systems. They outline their findings in the journal “Nature Communications” from 21 September 2020.

Systems for quantum communication require photons of different wavelengths. For communication over long distances, the main requirement is to avoid signal losses; wavelengths around 1,550 nanometres can be used for this purpose. For short distances, on the other hand, photons are needed that can be detected as effectively as possible and connected to other quantum memory systems. This would be possible with red light, or more precisely with wavelengths between 700 and 800 nanometres. Currently available photon detectors have their highest sensitivity in this range. Moreover, light particles of this frequency could be coupled with a rubidium storage system.

In order for information in a quantum system to be precisely encoded, manipulated and read out, stable optical emission is crucial. This is exactly what the researchers have now achieved for photons near the visible red range.

The project was a collaborative venture between a team of young physicists led by Professor Richard Warburton from the Basel-based Nano-Photonics Group and Professor Andreas Wieck, Dr. Arne Ludwig, Dr. Julian Ritzmann and colleagues from the Chair for Applied Solid State Physics in Bochum. The researchers converted the quantum dots in a semiconductor made of gallium arsenide. Since the system has to be cooled with liquid helium, it operates at low temperatures of minus 269 degrees Celsius.

One of the main challenges was to design a diode with gallium-arsenide quantum dots that reliably emits photons at these low temperatures. The Bochum-based team produced aluminium-gallium-arsenide layers with a lower aluminium concentration than usual, which improved the layers conductivity and stability. The Nano-Photonics team then used this material for the experiments in Basel.

In the next step, the researchers are planning to combine the newly developed quantum dots with a rubidium quantum memory device. Such hybrid structures would be a first step towards practical applications in future quantum communication network.