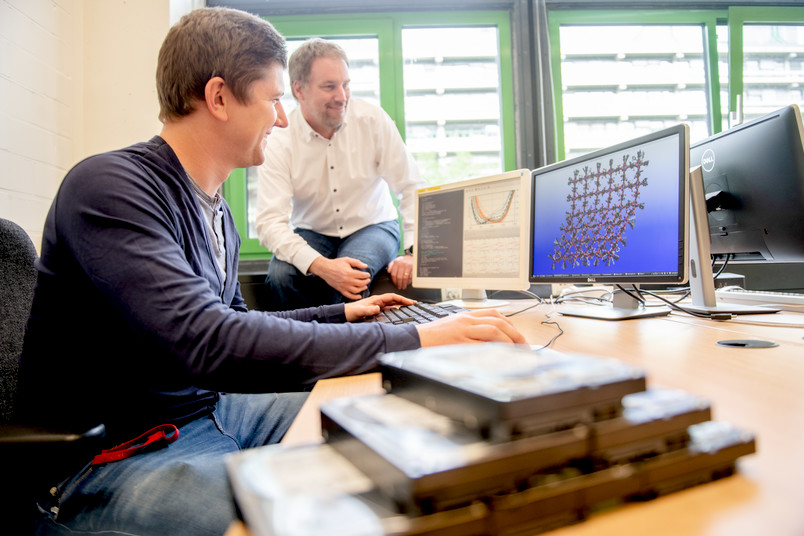 Julian Keupp and Rochus Schmid (right) from the team of authors look at the presentation of a metal-organic framework.
© RUB, Marquard
Materials science

Combined efforts of experiment and simulation pave the way to new applications.

Materials consisting of inorganic and organic components can combine the best of two worlds: under certain circumstances, the so-called MOFs – short for metal-organic frameworks – are structured in the same order as crystals and are at the same time porous and deformable. This opens up the prospect of intelligent materials for energy-saving technical applications. However, so far only a few flexible MOFs have been identified. A research team from Ruhr-Universität Bochum (RUB) and Technische Universität München (TUM) has used experiments and simulations to find out by what means MOFs can be rendered flexible and why: they tricked the system by using clever chemical manipulations to enable a variety of energetically similar arrangements in the crystalline order. The researchers published their report in the journal Angewandte Chemie International Edition from 14 September 2020.

The application potential of MOFs was first discovered around 20 years ago, and almost 100,000 such hybrid porous materials have since been identified. There are great hopes for technical applications, especially for flexible MOFs. As shock absorbers, for example, they could react to sudden high pressure by closing their pores and losing volume, i.e. deforming plastically. Or they could separate chemical substances from each other like a sponge by absorbing them into their pores and releasing them again under pressure. “This would require much less energy than the usual distillation process,” explains Rochus Schmid. However, only a few such flexible MOFs have been identified to date.

In order to get to the bottom of the underlying mechanisms within such materials, the Munich team has carried out a more detailed experimental analysis of an already widely known MOF. To this end, the researchers subjected it to uniform pressure from all sides, while observing what goes on inside using X-ray structure analysis.

“We wanted to know how the material behaves under pressure and which chemical factors are the driving force behind the phase transitions between the open-pored and closed-pore state,” says Gregor Kieslich. The experiment showed that the closed-pore form is not stable; under pressure the system loses its crystalline order, in short: it breaks down.

This is not the case with a variant of the same basic structure: if the team attached flexible side chains of carbon atoms to the organic connecting pieces of the MOF that protrude into the pores, the material remained intact when compressed and resumed its original shape when the pressure decreased. The carbon arms turned the non-flexible material into a flexible MOF.

The secret of phase transformation

The Bochum team investigated the underlying principles using computer chemistry and molecular dynamics simulations. “We have shown that the secret lies in the degrees of freedom of the side chains, the so-called entropy,” outlines Rochus Schmid. "Every system in nature strives for the greatest possible entropy, to put it simply, the greatest possible number of degrees of freedom to distribute the energy of the system."

"The large number of possible arrangements of the carbon arms in the pores ensures that the open-pored structure of the MOF is entropically stabilized,” Schmid continues. "This facilitates a phase transformation from the open-pored to the closed-pore structure and back again, instead of breaking down when the pores are squeezed together as would be the case without the carbon arms.” In order to calculate such a large system comprised of many atoms and to search for the many possible configurations of the arms in the pores, the team developed a precise and numerically efficient theoretical model for the simulation.

The key result of the study is the identification of another chemical option to control and modify the macroscopic response behaviour of an intelligent material by a thermodynamic factor. “Our findings open up novel ways to specifically achieve structural phase transformations in porous MOFs,” concludes Gregor Kieslich.

The work was funded by the Deutsche Forschungsgemeinschaft as part of the research group 2433 “Switchable MOFs” as well as by a start-up grant as part of the priority program 1928 “Coordination Networks: Building Blocks for Functional Systems”, the Fonds der Chemischen Industrie and the University of Edinburgh. The high-pressure powder X-ray diffraction (HPPXRD) data were recorded at the Diamond Light Source in Oxfordshire, England.