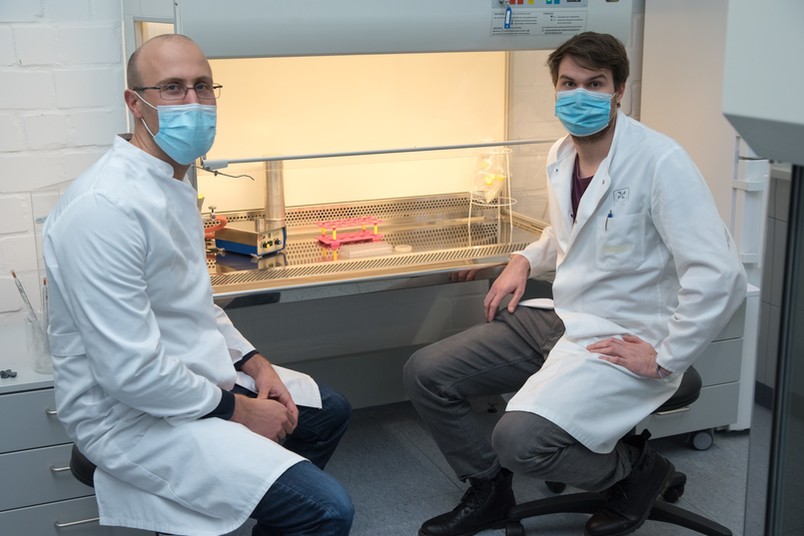 Luminous carbon nanotubes detect pathogens – and are quick and easy to use.

Researchers from Bochum, Göttingen, Duisburg and Cologne have developed a new method for detecting bacteria and infections. They use fluorescent nanosensors to track down pathogens faster and more easily than with established methods. A team headed by Professor Sebastian Kruß, formerly at University of Göttingen, now at Ruhr-Universität Bochum (RUB), describes the results in the journal Nature Communications, published online on 25 November 2020.

Traditional methods of detecting bacteria require tissue samples to be taken and analysed. Sebastian Kruß and his team hope to eliminate the need to take samples by using tiny optical sensors to visualise pathogens directly at the site of infection.

Fluorescence changes in the presence of bacterial molecules

The sensors are based on modified carbon nanotubes with a diameter of less than one nanometre. If they are irradiated with visible light, they emit light in the near-infrared range (wavelength of 1,000 nanometres and more), which is not visible to humans. The fluorescence behaviour changes when the nanotubes collide with certain molecules in their environment. Since bacteria secrete a characteristic mix of molecules, the light emitted by the sensors can thus indicate the presence of certain pathogens. In the current paper, the research team describes sensors that detect and differentiate harmful pathogens that are associated with, for example, implant infections.

“The fact that the sensors work in the near-infrared range is particularly relevant for optical imaging, because in this range there are far fewer background signals that can corrupt the results,” says Sebastian Kruß, who heads the Functional Interfaces and Biosystems Group at RUB and is a member of the Ruhr Explores Solvation Cluster of Excellence (Resolv). Since light of this wavelength penetrates deeper into human tissue than visible light, this could enable bacteria sensors read out even under wound dressings or on implants.

Additional areas of application are conceivable

“In the future, this could constitute the foundation for optical detection of infections on intelligent implants, as sampling would no longer be required. It would thus allow the healing process or a possible infection to be detected quickly, resulting in improved patient care,” says Robert Nißler, lead author of the study from the University of Göttingen. “The possible areas of application are not limited to this,” adds Kruß. “For example, improved rapid diagnosis of blood cultures in the context of sepsis is also conceivable in the future.”

The study was funded by the Volkswagen Foundation and the Resolv Cluster of Excellence.