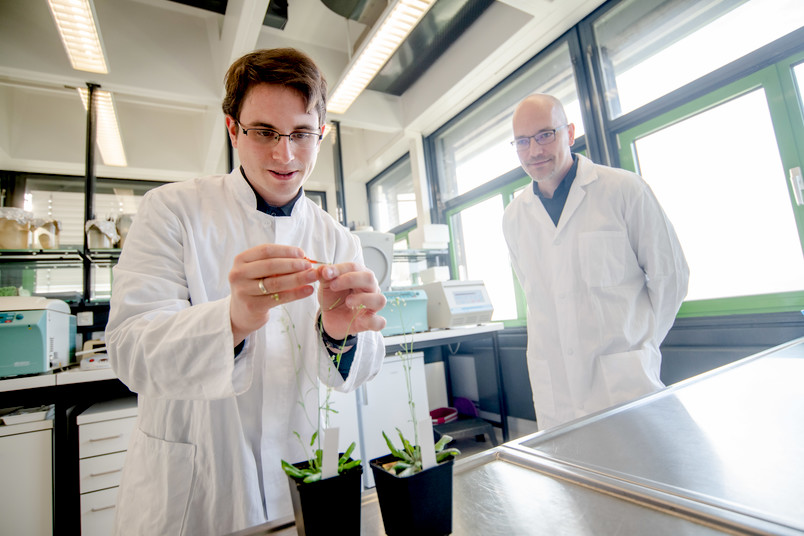 Dietmar Mehlhorn and Christopher Grefen (back) are on the trail of the previously undiscovered receptor.
© RUB, Marquard
Protein research

Newly discovered receptor helps to sneak a peek at evolution

What mammals and yeasts can do, plants can do, too: inserting proteins into membranes via a specific pathway. A legacy of their last common ancestor.

Certain proteins call for unusual ways to get incorporated into membranes, because the signal sequence required for this process is located at their rear end instead of at the front. The relevant mechanism and its components are well-known and well-studied in yeast and mammals. Scientists have already hypothesised that it also occurs in plants, but there was no evidence of an indispensable receptor, until now. Existence of the receptor was now proven experimentally by the team headed by Professor Christopher Grefen from the Chair of Molecular and Cellular Botany at Ruhr-Universität Bochum (RUB). The researchers published their report on the 5. January 2021 in the journal Proceedings of the National Academy of Sciences PNAS.

GET pathway for specific proteins

Together with lipids, membrane proteins are a central component of all biological membranes and fulfil important functions in transport and information transfer within and between cells. The majority of membrane proteins are recognised by a signal recognition particle on the basis of signal sequences at the front end of the protein and are incorporated into the membrane of the endoplasmic reticulum during their synthesis. From there, the proteins are transported to most of the important cellular membranes.

However, there is a functionally important family of membrane proteins whose signal sequence is located at the end of the protein. “Therefore, these proteins can’t be integrated into the membrane the usual way,” explains lead author Lisa Yasmin Asseck. These so-called tail-anchored (TA) proteins use a mechanism known as GET pathway. GET stands for Guided Entry of TA proteins.

The central component of the pathway is a vehicle within the cell fluid, the cytosolic ATPase GET3. It transfers the newly synthesized TA proteins to the receptors GET1 and GET2, which are bound to the endoplasmic reticulum and ensure their membrane insertion.

While the pathway with all its components has been thoroughly described in mammals and their more closely related yeasts, it remained puzzling in plants. “Some components could be identified in plants based on sequence similarities, but there was no trace of the receptor protein GET2,” says Christopher Grefen.

His team has now successfully identified this previously undiscovered receptor in the model plant Arabidopsis thaliana. By specifically eliminating the receptor – using for example the Crispr/Cas9 genetic scissors – the researchers were also able to study its function more closely. “The only difference between wildtype and Arabidopsis mutants lacking the GET2 receptor is that the latter develop shorter root hairs,” explains Grefen. “This does not restrict the growth of the plants under laboratory conditions, it could, however, pose a problem in the wild – especially when water is scarce.” Interestingly, mammals without a GET2 receptor are unable to survive, whereas yeast cells can grow, since they have developed a backup mechanism that kicks in when the receptor is missing.

A remarkable observation for the researchers is the fact that the GET2 receptors of different organisms show great structural similarities despite differences in sequence. “This suggests that their function is evolutionarily conserved. That means that the GET pathway has been around for a very long time, and today’s organisms have inherited it from their last common ancestor during evolution,” elaborates Christopher Grefen. “The discovery of the protein sequence of GET2 from Arabidopsis provides an important piece of the puzzle for understanding the cross-kingdom evolution of the GET pathway and, at the same time, serves as basis for further studies in other plant and algal species.”

The research was funded by a PhD scholarship of the Carl Zeiss Foundation as well as by the German Research Foundation within the Collaborative Research Centres 1190 and 1101 and the Emmy Noether Programme, funding codes GR 4251/1-1 and 1-2.