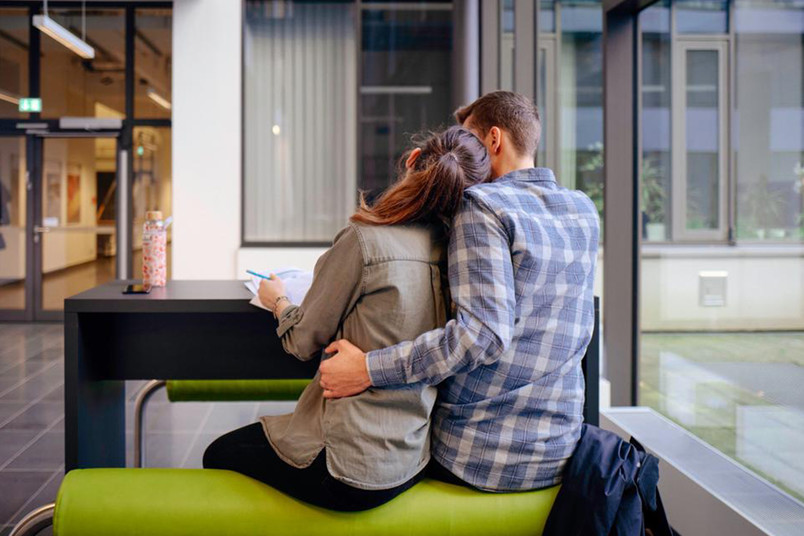 Romantic situations cannot be recreated in the lab as well as they are experienced at home. A team from Bochum has thus chosen a new investigative approach.
© RUB, Kramer
Psychology

Getting romantic at home wearing an EEG cap

Kissing, cuddling, chatting – thanks to modern research equipment, researchers have been able to record the brain activity of couples in emotional situations at home.

Research into the neuronal basis of emotion processing has so far mostly taken place in the laboratory, i.e. in unrealistic conditions. Bochum-based biopsychologists have now studied couples in more natural conditions. Using electroencephalography (EEG), they recorded the brain activity of romantic couples at home while they cuddled, kissed or talked about happy memories together. The results confirmed the theory that positive emotions are mainly processed in the left half of the brain.

In previous studies on the neuronal correlates of emotion processing, feelings were usually triggered in subjects by presenting certain images or videos in the laboratory. “It was unclear whether that really reflects how people experience and act out feelings,” says Julian Packheiser. “Ultimately, emotions comprise not only the perception of feelings but also their expression.”

This is why, in the current study, the researchers measured the brain waves of 16 couples in positive emotional situations in their own homes. A measurement of this kind would not be possible using conventional EEG systems as the movements created during kissing, cuddling or gesticulation produce artifacts in the data. “We have used a mobile EEG system that records not only brain waves but also the movement patterns of the subjects,” explains Julian Packheiser. This allowed the team to control the artifacts in the data.

Positive situations, above all emotional situations involving kissing and talking, were associated with greater activity in the frontal areas of the left half of the brain. The study thus confirmed the results from laboratory investigations and what is known as the valence model of emotional lateralisation, which states that positive emotions tend to be processed in the left half of the brain and negative emotions in the right.

The German Research Foundation supported the work within the framework of funding code OC127/9-1 and the Research Training Group “Situated Cognition” (GRK 2185/1).