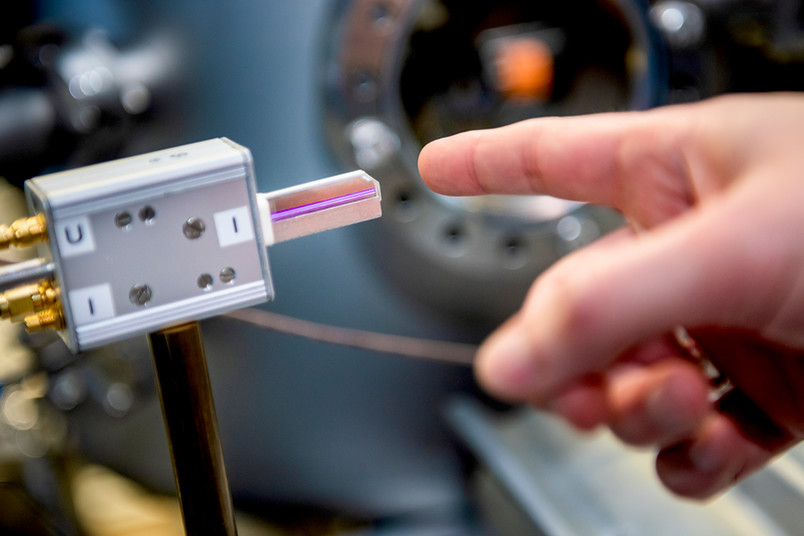 A microplasma jet that the researchers operate using voltage waveform tailoring. The plasma emits light between the two parallel electrodes. Through an opening on the right, the reactive particles generated in the plasma, such as atomic oxygen, are released into the surrounding atmosphere. There, they can then interact with surfaces.
© Damian Gorczany
Low-temperature plasmas

How plasmas become up to ten times more efficient with the same energy input.

Plasmas are used in industry, for example, to specifically alter surfaces such as coating glasses lenses or displays or etching microscopic channels into silicon wafers – a billion-dollar industry. However, they could work much more efficiently if their activity were specifically controlled. Associate professor Dr. Julian Schulze from the Institute for Electrical Engineering and Plasma Technology at Ruhr-Universität Bochum (RUB) is working on this. By generating the plasma using electrical voltage with optimised shapes of the voltage waveform, he was able to achieve a five times greater density of reactive particles in the plasma. Rubin, the scientific magazine from RUB, reports on this.

Schulze is concentrating on plasmas that are created at room temperature, called low-temperature plasmas. They are often used for medical and industrial applications as they do not attack or destroy the surrounding surfaces. Such plasmas can, for instance, be created between two electrodes, one of which is grounded, while a voltage is applied at the other. By applying the voltage, an electric field is created at the electrodes, which repels the negatively charged electrons from the surfaces while attracting positively charged ions. Due to the rapid movement of the electrons resulting from this acceleration, neutral particles can be excited by colliding with fast electrons. This ultimately causes plasmas to glow. The acceleration of ions onto the surface can be used for surface modification.

A sinusoidal voltage is normally applied to the electrodes, including in industry. This accelerates the electrons in a certain way. But Julian Schulze is not satisfied with that: “Many electrons gain some of the applied energy, but each one does not get enough to efficiently break up other molecules and produce high densities of reactive particles. The ion energy distribution at the interfaces cannot be controlled efficiently,” he clarifies. “We do not want to distribute the energy over electrons and ions with a watering can, but instead use it more specifically so that fewer electrons gain more energy and the ion energy at the interfaces can be controlled precisely. Plasmas then work more efficiently.”

His team experimented with the waveform shape of the voltage applied to the electrodes and used simulations. The procedure developed at RUB is called voltage waveform tailoring, VWT for short. By superimposing multiple frequencies, various voltage waveforms can be created, the effect of which on the plasma was investigated by the researchers.

It was found that customising this voltage waveform makes it possible to control and improve the temporal and spatial distribution of the energy supply to the plasma electrons. Similarly, ion energy distributions can be controlled at the interfaces. While supplying the same amount of energy, the number of reactive species created in the plasma thus increases. In principle, the same applies to the ions: here, too, the acceleration of the charge carriers can be customised in terms of space and time.

When superimposing two frequencies of the voltage applied at the electrodes, researchers were able to measure a more than five times greater density of the particles. “It is possible to increase the density of such particles tenfold compared to the application of sine-wave voltage waveforms and control it by adjusting the waveform shape,” explains Julian Schulze. Given the extent of plasma use in the semiconductor industry, the implications of this improvement are clear. “Any boost in efficiency means a huge economic effect,” clarifies the researcher.

A detailed article on the topic can be found in the scientific magazine Rubin. For editorial purposes, the texts on the website can be used free of charge citing the source “Rubin – Ruhr-Universität Bochum” and images from the download area may be used free of charge if the copyright is cited and while observing the terms of use.