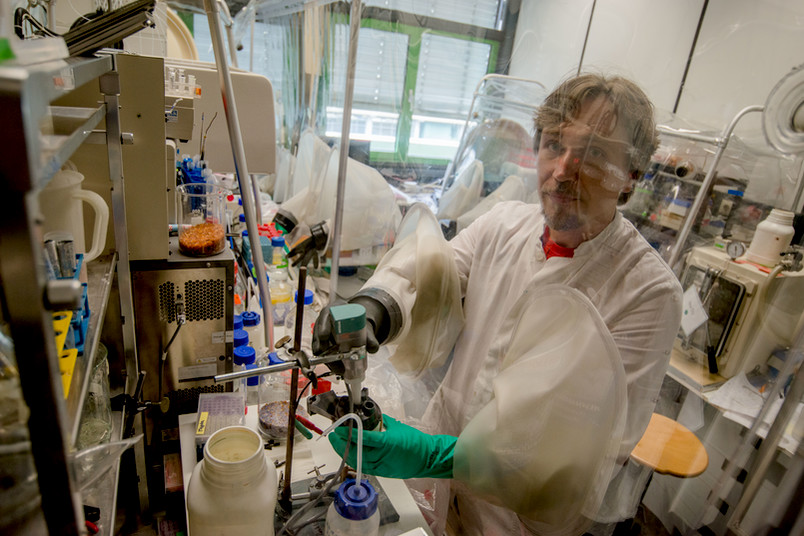 Martin Winkler is one of the authors of the current publication from the Photobiotechnology Working Group.
© RUB, Marquard
Biology

Hydrogen-producing enzyme protects itself against oxygen

The discovery may make it possible to use oxygen-stable enzymes as hydrogen producers.

Hydrogen-producing enzymes are beacons of hope in biohydrogen research. However, they are so vulnerable to oxygen in the air that it has not been possible to exploit their potential on a larger scale. The recently discovered [FeFe]-hydrogenase CbA5H from the bacterium Clostridium beijerinckii resists the oxygen attack. An international research team from the Photobiotechnology Research Group at Ruhr-Universität Bochum (RUB) led by Professor Thomas Happe and the Laboratoire de Bioénergétique et Ingénierie des Protéines (CNRS) in Marseille has been able to get to the bottom of this unique feature. They describe the molecular mechanism in Nature Communications on 2 February 2021.

Representatives of the [FeFe]-hydrogenase enzyme group combine protons and electrons to form molecular hydrogen at particularly high turnover rates. Some of them even use sunlight as a primary energy source for this. However, even low oxygen concentrations quickly lead to the irreversible breakdown of the catalytic cofactor, called the H-cluster. “This has so far been observed in all representatives of this enzyme group – except for CbA5H. This enzyme has a molecular mechanism that allows it to repeatedly survive the oxygen attack unharmed,” says Thomas Happe.

In collaboration with Professor Eckhard Hofmann, head of the Protein Crystallography group at RUB, the researchers discovered the enzyme’s trick by analysing its crystal structure. “In the active enzyme, the open substrate binding site usually represents the primary point of attack for oxygen,” explains Dr. Martin Winkler, one of the RUB researchers involved. In CbA5H, this normally accessible site is shielded under air: Under oxidative conditions the thiol group of a cysteine residue, which was already known for its involvement in proton mediation at the active site of [FeFe]-hydrogenases, binds directly to the free substrate coordination site of the catalytic 2FeH cluster. The point of access is thus blocked for oxygen as long as the ambient oxygen increases the redox potential.

As soon as oxygen is removed from the ambient gas mixture and the redox potential decreases, the thiol group is detached from the substrate binding site of the active site and the enzyme resumes its catalytic activity unharmed. “This hydrogenase can adopt the protected state repeatedly, unlike all other known [FeFe]-hydrogenases,” explains Thomas Happe.

The difference from other enzymes

It was initially unclear why specifically CbA5H exhibits this protective function, while other very similar [FeFe]-hydrogenases, that also provide this cysteine residue in the same place as part of the proton mediation chain lack this important feature. A closer inspection of the crystal structure of CbA5H in the oxygen-protected state showed that the section of the protein chain carrying this cysteine is shifted towards the substrate binding site near the active cofactor. Compared with oxygen-sensitive [FeFe]-hydrogenases such as CpI from Clostridium pasteurianum, the researchers at RUB were able to identify three smaller amino acids in CbA5H near to the shifted section of polypeptide chain, which provide it with greater freedom of movement. Electrochemical and infrared spectroscopy examinations of protein variants with single and double exchanges in these positions confirmed the importance of these amino acids for the unique, potential-controlled molecular safety cap mechanism of CbA5H.

“As we now know the structural conditions of this protective mechanism, it should be possible to also transfer the advantageous property of oxygen resistance from CbA5H to other [FeFe]-hydrogenases,” says Dr. Jifu Duan, another member of the Photobiotechnology Research Group. “If this is successful, we would be a major step towards using [FeFe]-hydrogenases as hydrogen biocatalysts,” confirms Thomas Happe.

The work was supported by the German Research Foundation as part of the cluster of excellence Resolv (EXC 2033, project number 390677874) and the Research Training Group RTG 2341 (microbial substrate conversion).