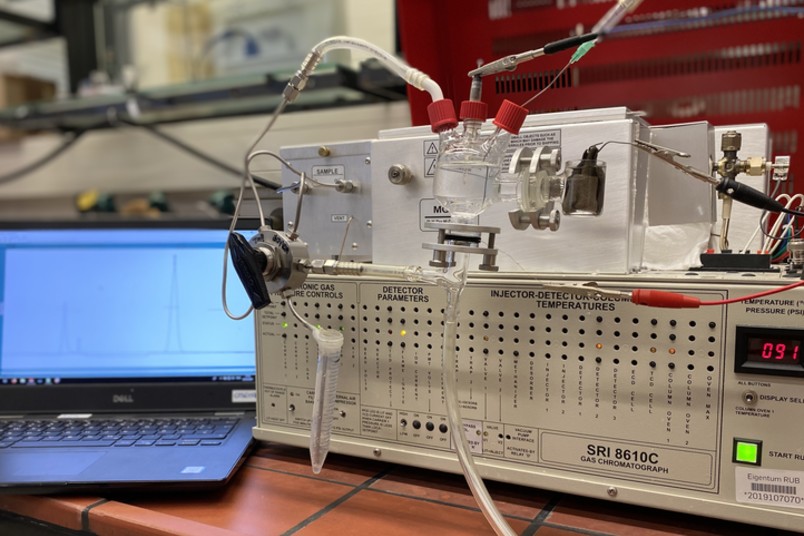 The gas diffusion electrode was analyzed in this measurement chamber. The products were detected with gas chromatography.
© João Junqueira
Electrochemistry

CO2 can be converted electrochemically into starting materials for industry. So far, however, catalysts that are stable over a long period of time have been lacking. A few tricks could solve the problem.

A new catalyst for the conversion of carbon dioxide (CO2) into chemicals or fuels has been developed by researchers at Ruhr-Universität Bochum and the University of Duisburg-Essen. They optimized already available copper catalysts to improve their selectivity and long-term stability. The results are described by the team led by Dr. Yanfang Song and Professor Wolfgang Schuhmann of the Bochum Center for Electrochemistry with the team led by Professor Corina Andronescu of the Duisburg-Essen Technical Chemistry III group in the journal Angewandte Chemie, published online on 9 February 2021.

The climate gas CO2 can be converted into larger carbon compounds that can be used as base chemicals for industry or as fuels. Researchers are pursuing the idea of converting CO2 electrochemically with the help of renewable energies. This would not only create useful products; they would also serve as storage for the renewable energies. Copper has already emerged as a promising catalyst in previous studies, but it must be in the form of a partially positively charged ion – and that is precisely the problem.

Under conventional reaction conditions, copper is rapidly converted from its positively charged form to the neutral state, which is unfavorable for the formation of products with more than two carbon atoms and thus deactivates the catalyst.

The team from Bochum and Duisburg-Essen therefore modified a copper catalyst with boron. The researchers tested different copper-boron ratios and determined the optimal composition to favor the formation of compounds with more than two carbon atoms. They also showed that the boron-copper catalyst can be operated at current densities that would be required on an industrial scale.

They implemented the system in the form of a gas diffusion electrode in which a solid catalyst catalyzes the electrochemical reaction between the liquid and gaseous phases. It is important that sufficient CO2 dissolves in the boundary region between the gas and liquid phases. The scientists succeeded in doing this by using a special binder.

Another challenge is to keep the system stable over a long period of time. For example, corrosion of the electrodes must be prevented. To this end, the chemists integrated a so-called sacrificial anode made of zinc into the system. Since zinc is a less noble metal than copper, this is corroded first, while the copper is spared.

“The combination of a selective and active catalyst material in a gas diffusion electrode and the addition of the stabilizing zinc is an important step towards the use of CO2 for the synthesis of base chemicals,” sums up Wolfgang Schuhmann.

Financial support for the project came from the European Research Council under the European Union’s Horizon 2020 research and innovation program (CasCat, 833408), the German Research Foundation in the framework oft he research unit FOR 2397e2 as well as the Cluster of Excellence Ruhr Explores Solvation – RESOLV (EXC 2033-390677874), the German Federal Ministry of Education and Research (MatGasDif, 03XP0263), the Alexander von Humboldt Foundation, and the International Clean Energy Talent Program.