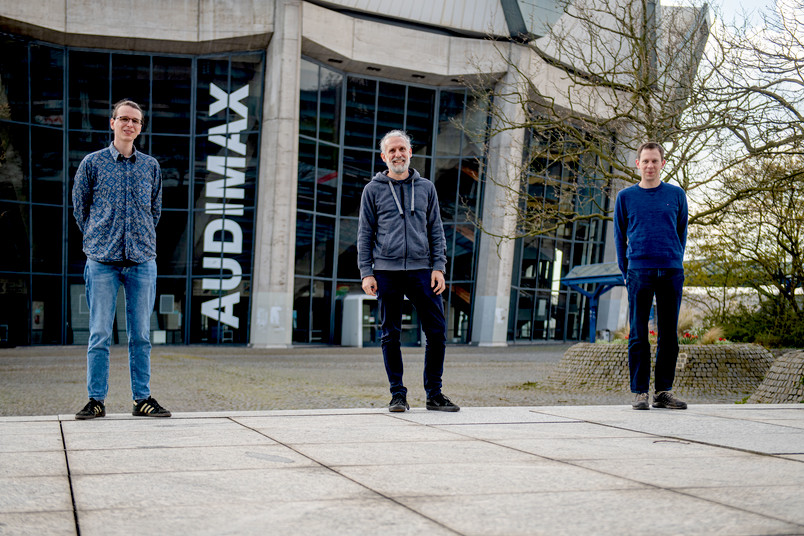 Jure Zabret, Marc Nowaczyk and Till Rudack (from left) from the author team
© RUB, Marquard
Biology

How is a molecular machine assembled?

In a first, a research team has worked out how photosystem II is made up of more than 100 individual components.

The conversion of light into chemical energy by plants and photosynthetic microorganisms is one of the most important processes in nature, removing climate-damaging CO2 from the atmosphere. Protein complexes, so-called photosystems, play the key role in this process. An international research team from Ruhr-Universität Bochum (RUB), the Max Planck Institutes of Biochemistry and Biophysics, the Center for Synthetic Microbiology (SYNMIKRO) and the Chemistry Department at Philipps Universität Marburg, the University of Illinois Urbana-Champaign, USA, and Université Paris-Saclay, France, shed light for the first time on the structure and function of a transition state in the synthesis of photosystem II. The study was published online on 12 April 2021 in the journal Nature Plants.

Photosystem II (PS II) is of fundamental importance for life, as it is able to catalyse the splitting of water. The oxygen released in this reaction allows us to breathe. In addition, PS II converts light energy in such a way that atmospheric CO2 can be used to synthesise organic molecules. PS II thus represents the molecular beginning of all food chains. Its structure and function have already been researched in detail, but little has been known so far about the molecular processes that lead to the orderly assembly of the complex.

PS II consists of more than 100 individual parts that have to come together in a well-orchestrated process in order to ultimately create a fully functional machine. Helper proteins, so-called assembly factors, which are responsible for the sub-steps, play a crucial role in this process. “Picture them as robots on an assembly line, for example making a car,” explains Professor Marc Nowaczyk from the RUB Chair for Plant Biochemistry. “Each robot adds a part or assembles prefabricated modules to end up with a perfect machine.”

When figuring out how this is done, the difficulty was to isolate an intermediate product, including its molecular helpers, because such transition states are very unstable compared to the finished product and are only present in very small quantities. Only by using tricks, such as removing a part of the assembly line production, was it possible to isolate an intermediate stage with the associated helper proteins for the first time.

Thanks to cryo-electron microscopy, sensitive protein structures, which include PS II transition states, and even the smallest virus particles can be imaged. The data, published in Nature Plants, show the molecular structure of a PS II transition complex with as many as three helper proteins. “During the construction of the PSII structural model, it turned out that one of these helper proteins causes previously unknown structural changes that we eventually linked to a novel protective mechanism,” explains Dr. Till Rudack from the Centre for Protein Diagnostics (ProDi). During this assembly step, PS II is only partially active: light-induced processes can already take place, but water splitting is not yet activated. This, as it turned out, leads to the formation of aggressive oxygen species that can damage the unfinished complex. However, the binding of the helper protein and the associated structural change at PS II can prevent the formation of the harmful molecules and, consequently, protect the complex in its vulnerable phase. Another helper protein in turn prepares the activation of the water-splitting mechanism. “As soon as we succeed in identifying any further intermediate stages of this activation, this could be the key to a profound understanding of molecular light-driven water splitting. As a result, we could advance the development of synthetic catalysts for the energy conversion of sunlight into organic substances,” conclude the authors.

The project was funded by the Foundation for the National Institutes of Health, the German Research Foundation and Agence Nationale de la Recherche.