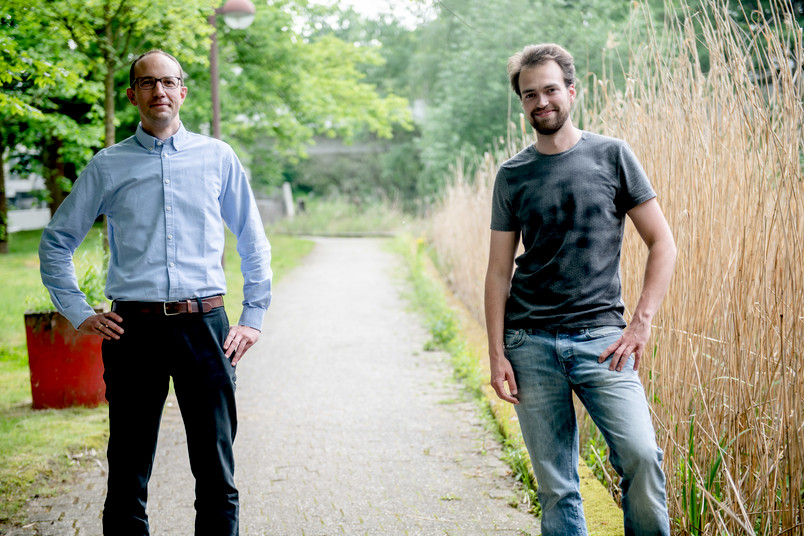 Andreas Reiner (left) and Robin Herbrechter worked on glutamate receptors, which are essential for signal processing in the brain.
© RUB, Marquard
Neurobiology

Proteins are encoded by genes – however, this information is divided into small coding sections, which are only assembled during a process called splicing. Various combinations are possible, some of which are still unknown. Dr. Robin Herbrechter and Professor Andreas Reiner from the junior research group Cellular Neurobiology at Ruhr-Universität Bochum (RUB) now systematically analysed alternative splicing in the family of ionotropic glutamate receptors (iGluRs), which is essential for signal processing in the brain. These findings were published in the journal Cellular and Molecular Life Sciences on 8 June 2021.

Huge splicing diversity in the brain

The human genome was sequenced around 20 years ago. Since then, the sequence information encoding our proteins is known – at least in principle. However, this information is not continuously stored in the individual genes, but is divided into smaller coding sections. These coding sections, also known as exons, are assembled in a process called splicing. Depending on the gene, different exon combinations are possible, which is why they are referred to as different or alternative splicing combinations.

Almost all 20,000 human genes can be alternatively spliced. A particularly huge variety of different splice variants is found in the brain, which allows for creating a huge diversity and allows to adapt the proteins to specific requirements. “However, it is not easy to determine, which protein variants are actually present,” says Andreas Reiner. “Sequencing of already-spliced messenger RNAs (mRNAs), so-called RNA-Seq data, which are now increasingly being obtained with high-throughput approaches, offers a way out.” Robin Herbrechter and Andreas Reiner now used such data to obtain an overview of all ionotropic glutamate receptor splice variants.

Using bioinformatic methods, the researchers aligned billions of mRNA sequence snippets to the genome to reconstruct the frequency of individual splice events. This method also enabled them to detect new, previously unknown splice variants. There were quite a few surprises: the systematic analysis showed that some variants found in the previously studied model organisms mouse and rat do not occur in humans at all, or are much less abundant than previously assumed.

“Among the newly identified isoforms, some are particularly exciting, as they are quite different from the previously known variants and could thus have new functions,” says Robin Herbrechter. This includes a protein domain formed by the gene of the GluA4 AMPA receptor, as well as the first description of a delta receptor 1 (GluD1) isoform. While the focus will now be on analysing these variants, also further bioinformatic analyses are planned, for example to determine which cell types produce the different splice variants.

The research work was funded by the Ministry of Culture and Science of the State of North Rhine-Westphalia within the framework of the NRW Returning Scholars Programme.