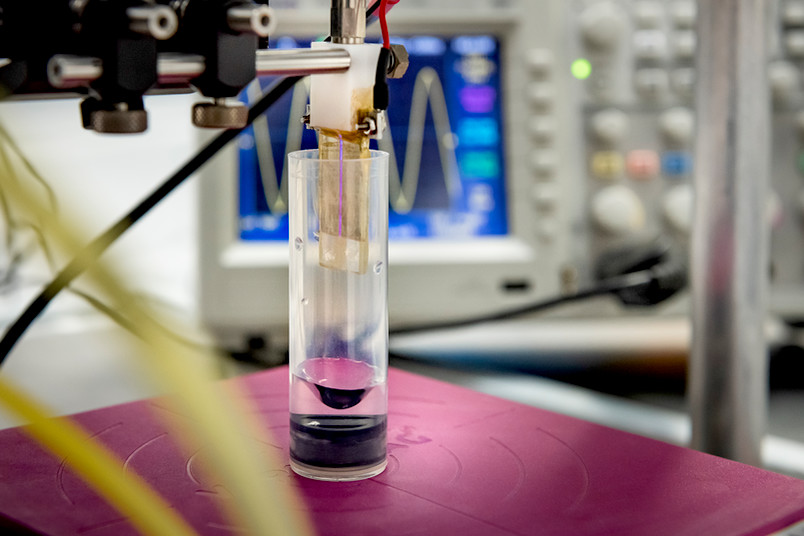 In a specially manufactured reactor, which rotates permanently thanks to a magnet, there are beads with immobilized enzyme. The mixing of the sample ensures an efficient supply of the substrates, while the immobilization ensures that a certain buffer zone is created in which highly reactive particles from the plasma jet can react.
© Damian Gorczany
Biology

Plasmas usually have a destructive effect on enzymes. But in this instance, they supply them with a building block for biocatalysis at the push of a button.

Enzymes can do a good job as catalysts – they can, for example, synthesise a specific product, but not its mirror image, which has to be laboriously separated in other processes. However, they are sensitive and are sometimes inactivated by the substrate they convert. Using plasma, the team of Professor Julia Bandow, holder of the Chair of Applied Microbiology at the Faculty of Biology and Biotechnology at Ruhr-Universität Bochum (RUB), successfully supplied an enzyme from a fungus with such a starting substance without it being damaged. The report has been published in Rubin, the RUB’s science magazine.

The production of many chemicals results not only in the desired product but also in its mirror image: the two so-called enantiomers are very similar as far as their physico-chemical properties are concerned and are therefore difficult to separate; but they do have different biological properties. This is evident when it comes to drugs, for example, as the (S)-Ibuprofen molecule is effective against pain, but its twin (R)-Ibuprofen is not. Accordingly, Bandow’s research group employs enzymes, i.e. biological catalysts derived for example from bacteria or fungi, to produce such chemicals. But some enzymes produce only one of the two enantiomers.

In general, however, enzymes are rather sensitive catalysts. Some are even susceptible to inactivation by the substrate they convert. “Our example enzyme is a case in point. The unspecific peroxigenase, or UPO for short, extracted from the edible fungus Agrocybe aegerita or chestnut mushroom and synthesised by the research group of Professor Frank Hollmann from Delft can produce the fragrance (R)-1-phenylethanol. It requires hydrogen peroxide as a substrate for this purpose. If it is simply added to the enzyme in solution in the form of a concentrate, the starting material of the desired reaction deactivates the enzyme within a short time,” explains Julia Bandow.

A dilemma that the team resolved using several tricks. One of them was to use a plasma to produce hydrogen peroxide. In plasmas, which are created by adding energy to a gas, numerous reactive substances are formed that destroy cancer cells, biofilm, viruses or prions. In this instance, however, the plasma was supposed to help protect the biocatalysts by providing the enzyme with exactly the right dose of the reactive substances needed to catalyse the fragrance at the push of a button.

The group therefore experimented with plasmas based on air or noble gases ignited directly above the enzymes in solution to produce the fragrance (R)-1-phenylethanol. However, the enzymes on the surface were quickly destroyed by the reactive species. This is how trick number two came into play: the researchers attached the enzymes to beads, small spheres with a porous surface that lie at the bottom of the solution and hold the enzymes in place. They tested the optimal composition of the beads beforehand, because not every enzyme can dock equally well on every surface and still do its job, as this sometimes requires the enzymes to move.

As a result, they succeeded in getting some solution above the beads at the bottom of the container to separate and buffer the enzymes from the gas phase. The hydrogen peroxide produced by the plasma diffuses to the enzymes and is converted by them. The enzymes never come into contact with an overdose of the substrate or other reactive species. This means they remain intact and functional.