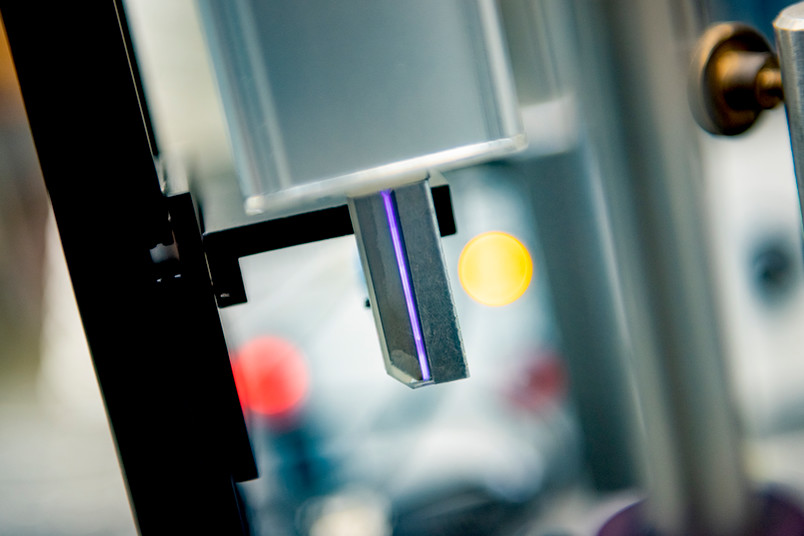 The COST-jet, i.e. the reference plasma source developed in Bochum, is about the size of an index finger.
© Damian Gorczany
Plasma physics

In order to tailor plasmas for medical applications, it is necessary to know their effective components in detail. A team from the Collaborative Research Centre 1316 is providing new insights.

Plasmas may be of interest for many medical applications, for example for wound healing or for eliminating antibiotic-resistant germs. Different plasmas are used for different applications, because the decisive factor is the reactive particles in the plasma. In Collaborative Research Centre 1316, researchers from Ruhr-Universität Bochum (RUB) have explored the distribution of reactive oxygen atoms in a widely used plasma, the so-called COST jet. They also contributed to the development of this plasma source, which is now in use as a reference plasma at many research centres. The team headed by Dr. Volker Schulz-von der Gathen and Professor Judith Golda describes the details and results of the plasma characterisation experiments in RUBIN, the RUB’s science magazine.

The reactive particles contained in a plasma depend on the gas mixture from which a plasma is formed. If oxygen is included, it can be present in the plasma, for example, as a positively (O+) or negatively charged ion (O-), as a neutral atom (O), as molecular oxygen (O2) or ozone (O3).

“Since many biological systems need a certain amount of oxygen, plasma treatments with reactive oxygen species can have positive effects,” elaborates Judith Golda from the Chair of Experimental Physics (Plasma Interface Physics). “But sometimes it can be too much oxygen.” It is therefore important to know exactly how much reactive oxygen is present in the plasma and what the optimal distance from the target surface to the plasma would be. “This is the only way to later develop applications that are also safe for patients,” says the researcher.

Spectroscopy was used to make the necessary measurements. In the process, the researchers transmit laser light of a specific wavelength into the plasma. This light is absorbed by the oxygen particles, raising them to a higher energy level. After a while, they return to their ground state, emitting light of a certain wavelength, which the researchers can measure. The emitted wavelength depends on the particle that emits the light; a neutral oxygen atom, for example, sends back different light than a positively charged oxygen ion. Based on the amount of light emitted at certain wavelengths, the researchers can thus deduce the amount of different oxygen species.

This is how the team found that the amount of oxygen atoms in the plasma decreases exponentially as the distance from the source increases. Using analytical models, they also showed why this is the case. “Because the particles are so reactive, they quickly react further to form other compounds, such as molecular oxygen or ozone,” explains Judith Golda.

The Bochum-based researchers developed the COST plasma jet together with teams from Greifswald, Eindhoven, Milton Keynes, York and Dublin. The goal was a plasma whose properties are precisely characterised and which can be reproduced with exactly these properties. This is because what exactly a plasma does in a particular application depends on the specific plasma parameters, such as its composition. Many groups worldwide are now using the COST jet, so the research done by all these groups is comparable.