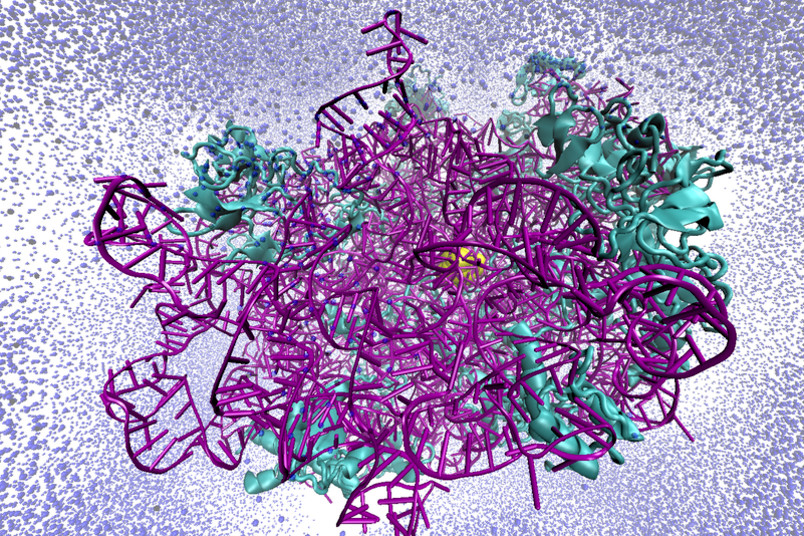 Ribosome-antibiotic complex: The protein chains are shown in cyan, the nucleic acid in purple, the ligand in yellow and the water is represented by the blue spheres.
© Elsa Sanchez-Garcia
Chemistry

Researchers have developed a strategy to use supercomputers to tackle the threat of diseases caused by antibiotic-resistant bacteria.

The development of antibiotics is one of the most significant breakthroughs in medicine. However, pathogens develop resistance mechanisms that thwart the effectiveness of antibiotics. Around 700,000 people die every year because of such resistant bacteria. Thanks to simulation strategies, supercomputers can help speed up the much-needed development of new antibiotic variants. The computational workflow was implemented by an international team headed by researchers from the Ruhr Explores Solvation RESOLV Cluster of Excellence (EXC 2033). The results will be published on 16 November in the journal Proceedings of the National Academy of Science, PNAS.

Developing a new antibiotic is particularly difficult and very few new classes of antibiotics have been developed since the 1960s. In the current study, the researchers follow another approach. They do not develop a completely new type, but start from an already existing antibiotic, which they then modify. To do this, they used a strategy in which they simulated computationally several aspects of the candidates. Among other things, how soluble the antibiotic is, how effectively it penetrates the bacterial membrane and how efficiently it blocks the pathogens' protein production are important for its effectiveness. "The computational evaluation of whether a chemical compound will be active before it is actually synthesised avoids chemical waste." explains Professor Frank Schulz from RESOLV at RUB.

The past has shown that often not much time passes before resistance to a new antibiotic emerges. Thus, it is to be expected that the bacteria will develop counterstrategies against the researchers' counterstrategies and become resistant to the new antibiotic variant. "Our hope with this study is to show that the resistance mechanisms of bacteria can be addressed in a systematic way with computational strategies that help to make the development of new antibiotic derivatives faster and more affordable" explains Professor Elsa Sanchez-Garcia, head of the Computational Biochemistry group at the UDE and Principal Investigator of RESOLV. "In this way, science can continuously fight back with the computer-assisted development of new antibiotics."

The results of the supercomputer calculations were tested experimentally. In the study, the research team not only implemented the computer-based simulation approach, but also presented a new promising drug candidate. The drug candidate, which still must be clinically tested, was shown to be up to 56 times more active for the tested bacterial strains than two known antibiotics that are on the World Health Organisation's list of essential medicines. The new antibiotic variant is not only more effective against the target organisms tested, but also shows activity against the three highest ranked bacteria on the World Health Organization's priority list, for which the existing antibiotics tested are not effective. In addition to this success, a library of compounds with antibacterial activity was created, which allows for faster iteration in the development of further antibiotic variants.

Ruhr University Bochum, TU Dortmund University and the University of Duisburg-Essen have been closely collaborating as strategic partners under the University Alliance Ruhr (UA Ruhr) umbrella since 2007. By joining forces, these partner universities are able to systematically enhance their performance. Under the motto “Better Together”, there are now over 100 collaborations being conducted in research, teaching and administration. With more than 120,000 students and almost 1,300 professors, the UA Ruhr is one of the largest and most productive scientific locations in Germany.