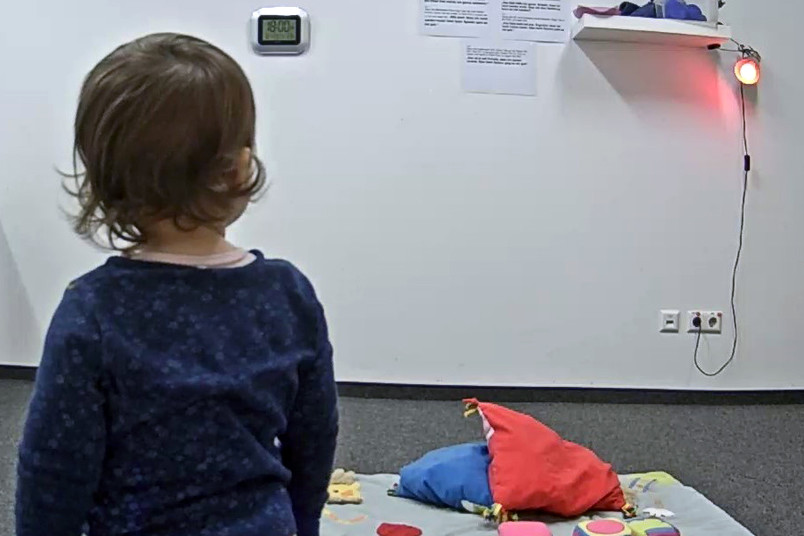 Three minutes can be endless for small children. They can learn how to bridge them effectively.

When toddlers have to wait, it often leads to negative affect, as they can’t yet regulate their emotions. A team headed by Johanna Schoppmann from the Developmental Psychology and Clinical Child and Adolescent Psychology units at Ruhr-Universität Bochum (RUB) set out to find out how to help them. Is temperament a factor that influences toddler behavior while waiting? Whom can children imitate in order to cope better with long waits? They concluded that, left to their own devices, children prefer activities which are corresponding to their temperament. Toddlers were able to learn to distract themselves by observing a stranger and generalized the observed behavior. The researchers published their report in the journal Child Development from 17 November 2021.

How to help your children

When their mother wants to finish typing an email or their father is on the phone, toddlers can get restless very quickly: at this age, waiting is not something they are good at. How can parents teach their children to cope better with such waiting situations? This question was the starting point for the study that involved 96 toddlers aged two and their parents. A previous study had shown that children can learn through observation to distract themselves with a toy while waiting. The current work focused on role of a child’s temperament.

Therefore, the researchers made the toddlers in the study wait for three minutes for a small gift or candy. The coveted object was put out of reach, but within sight and the study leader left the room. While waiting, the parents interfered as little as possible with the child, leaving them to their own devices. A stack of cups and, as a more active toy, a toy lawn mower were available. On the experimenter’s return, the toddler received the desired object. “We observed that children who were described by their parents as rather calm tended to occupy themselves by playing calmly, such as stacking the cups, and the toddlers who were characterised by their parents as rather active tended to play in an active manner, such as running around with the lawn mower and thus managed to regulate their negative feelings well,” outlines Johanna Schoppmann.

Strangers, too, can be role models

In the second step, the researchers looked at how best to support a child in finding something to do while waiting in order to regulate their emotions. To this end, the researchers showed the children how to distract themselves with either quiet or active playing activities, whereas children in a control group performed a playful task that had nothing to do with waiting. Subsequently, all children waited a second time for three minutes. “In this situation, it was shown that toddlers who had observed an adult playing while waiting distracted themselves more than the children who had not observed anyone waiting,” says Johanna Schoppmann. This means that the children copied distraction as a strategy. However, there were no differences in whether the children’s temperament matched the demonstrated playing style (quiet or active). The researchers conclude that toys that match the child’s temperament are not as important when it comes to learning strategies from others. Toddlers can also learn from both parents and strangers how to regulate their emotions through activity.

Johanna Schoppmann, Silvia Schneider, Sabine Seehagen: Can you teach me not to be angry? Relations between temperament and the emotion regulation strategy distraction in 2-year-olds, in: Child Development, 2021, DOI: 10.1111/cdev.13682