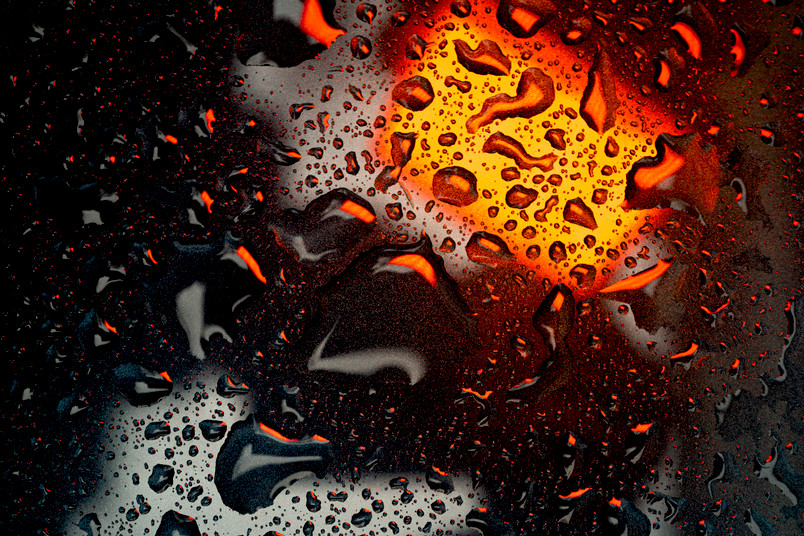 Researchers from RUB and their cooperation partners have investigated what happens at the interface between an aqueous solution and a charged surface.
© RUB, Kramer
Chemistry

How positively and negatively charged ions behave at interfaces

When charged particles enter the boundary layer between a liquid and an electrode, they first have to strip off their water shells.

How positively and negatively charged ions behave at the interface between a solid surface and an aqueous solution has been investigated by researchers from the Cluster of Excellence RESOLV at the Ruhr-Universität Bochum, its sister research network CALSOLV in Berkeley, and the University of Evry in Paris. At the SOLEIL synchrotron, they were able to use terahertz spectroscopy to observe exactly when and how the water shells around sodium and chloride ions are stripped away when voltages are applied in an electrolyte solution. They describe their results in the journal Proceedings of the National Academy of Sciences of the United States of America, or PNAS, published online on 15 November 2021.

Electrolytes are chemical compounds in which separate ions occur. For example, when sodium chloride (NaCl) is dissolved in water, the positively charged sodium ions and the negatively charged chloride ions separate and can move freely in the solution. Due to the electrical attraction between the ions and the water molecules, a shell of water molecules forms around the individual ions – a so-called hydration shell that is stable in the solution. A layer of charge carriers forms in the immediate vicinity of the electrical boundary layer between the electrode and water. A positive and a negative charge layer are opposite each other, which is why this layer is also called an electrochemical double layer. According to chemistry textbooks, the following happens when a voltage is applied: the attraction between the electrode and the ions strips off the water shell and a charge transfer, a current, occurs.

This simple picture explains how a battery works. In the present work, the researchers from Bochum, Berkeley and Paris investigated whether it is also correct at the molecular level. They also checked whether the process is identical when negative or positive voltages are alternately applied.

Observation during the process is difficult

Observing chemical processes on a molecular level while a voltage is applied is a special experimental challenge. This is exactly what the scientists succeeded in doing in the current study with terahertz spectroscopy, which they combined with simulations. For this purpose, the researchers investigated the electrochemical double layer that forms in a NaCl solution in the immediate vicinity of a gold surface at the SOLEIL synchrotron in Paris.

Terahertz spectroscopy makes it possible to follow the stripping of the hydration shell live. The researchers also showed for the first time how the water networks on the charged gold surface change. This is essential to understand how the total energy changes in the process. “It was astonishing for us to see that the process runs differently for positive and negative charges,” sums up Professor Martina Havenith, spokesperson of RESOLV.

Asymmetric detachment of the hydration shell

The researchers found that the hydration shells of sodium and chloride ions behaved differently in the electrochemical double layer. The hydration shell of the positively charged ions was already detached at small applied voltages and the sodium ion was attracted to the electrode. For the negatively charged chloride ions, this only happened at a higher applied voltage. The team was able to attribute these differences to the behaviour of the water networks at the interface. The scientists confirmed the results with the help of complex computer simulations.

The work was supported by the European Research Council (ERC Advanced Grant 695437 THzCalorimetry), the German Research Foundation in the framework of the Cluster of Excellence RESOLV (EXC 2033 - 390677874) and the Research Training Group "Confinement-controlled Chemistry" (GRK2376 - 331085229), ANR DYNAWIN (Grant Number 14-CE35-0011-01), GENCI-France (Grant Number 072484), the Ministry of Science of the State of North Rhine-Westphalia in the framework of the NRW Return Programme, the U. S. Department of Energy (including grant number DE-SC0004993), Office of Science, Office of Advanced Scientific Computing and Office of Basic Energy Sciences as well as the Swiss National Science Foundation.